Gase hands off playcalling, but Jets offense stalls in loss 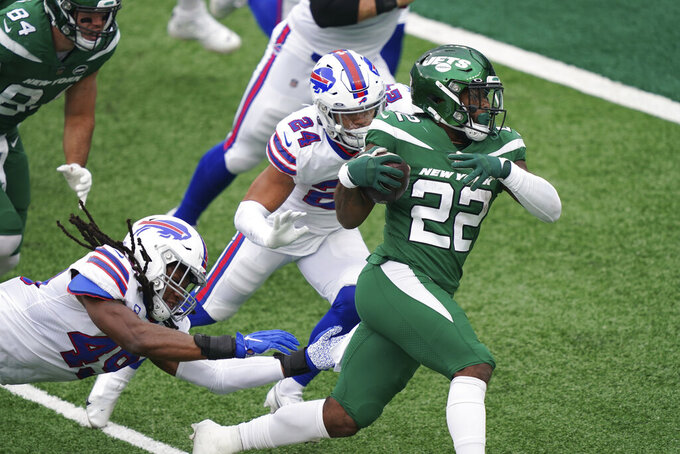 New York Jets' La'Mical Perine, right, runs the ball for a touchdown during the first half of an NFL football game against the Buffalo Bills, Sunday, Oct. 25, 2020, in East Rutherford, N.J. (AP Photo/John Minchillo)

So, he handed off the playcalling duties to coordinator Dowell Loggains, and the shakeup seemed to work early against the Buffalo Bills on Sunday.

“We gave ourselves a chance,” Gase said.

Until it skidded to a screeching halt in a brutal final two quarters that led to an 18-10 loss and sent the Jets to 0-7.

“Things were going well,” Gase said. “But we couldn't move the ball in the second half.”

The Jets finished with 4 total yards on offense after halftime — and that's not going to win many games at any level.

"They made some good adjustments,” said quarterback Sam Darnold, who started after missing two games with a sprained AC joint in his right shoulder. “We just have to adjust to their adjustments. We’ve got to beat man coverage and protect. I have to throw accurate footballs. That’s it.”

The Jets entered the game last or close to last in the NFL in several offensive categories. Injuries, mistakes, questionable playcalling and a lack of game-changing talent have all been culprits. But Gase, whose job is very much in jeopardy, recently began to consider having someone else call the offense.

After talking to his staff before last week's game at Miami, Gase decided to keep those duties. But after the Jets became the first team to be shut out this season, falling 24-0 to the Dolphins, Gase stepped back and let Loggains make the calls.

“Just trying to figure out what’s going on, how come we're not consistent and productive,” Gase said. “I just felt like it was the time to do it and see how our guys would respond, see what our offensive staff could put together. It looked like things were going well in the first half. My big thing was, it allowed me to take a step back and just really focus on every phase of our organization.”

It looked like a shrewd move by Gase, considering how the Jets started.

Darnold didn't appear to show any rust while marching New York down the field on its first possession before the drive stalled in the red zone. Sergio Castillo booted a 29-yard field goal — his first NFL kick in place of the injured Sam Ficken — to give the Jets a 3-0 lead.

The Jets’ second drive also stalled in the red zone, with La’Mical Perine getting stuffed for a 1-yard loss on fourth-and-1 from the Bills 18.

But after the defense got a takeaway when John Franklin-Myers recovered Josh Allen's fumble, the offense capitalized. Perine reached for the pylon on a 5-yard touchdown run that put New York up 10-0 midway through the second quarter — its largest lead of the season.

“It’s always good when that’s happening,” Darnold said. “We’ve just got to build off of that.”

But, the Jets couldn't.

They began to lose momentum late in the first half when Darnold was intercepted by Dane Jackson, a poor throw into heavy coverage. The Bills turned that into a field goal by Tyler Bass, one of six by the Buffalo kicker, and cut New York's lead to 10-6 at halftime.

The Jets had 186 yards of offense at that point, and things still appeared promising. The fact they gained only 4 more yards and just two first downs the rest of the way was stunning — even for an offense that has done very little this season.

“That’s one of the reasons why I’m interested in watching this, just to see what changed for us,” Gase said. “All of a sudden, were we not executing as well? Or is it just they made better plays than us? I just need to watch the film. It's hard to give you that answer just from watching it from series to series.”

Gase estimated it was the first time in eight or nine years, before he was Denver's offensive coordinator, that he didn't call the offensive plays during a regular-season game.

“It was different,” he said. “It's definitely different.”

Except, of course, the outcome was very much the same.

Gase hasn't decided if he'll reclaim playcalling duties or leave it to Loggains — or someone else.

“I’ve been talking to him about doing this for a few weeks now,” Gase said. “He did it. We’ll probably have another conversation. I’ll get his opinion and we’ll talk through it. We’ll just see what happens. We’ll figure out next week tomorrow.”

It doesn't get any easier for New York, either. The Jets will be heavy underdogs at defending Super Bowl champion Kansas City next Sunday.

“We looked at the first half and I feel like we got in a really good rhythm,” Darnold said. “We can definitely build off of that. We’ve got to look at the second half and learn from it. I know it’s not necessarily what people want to hear, but that’s just how it is.

"We’ve just got to continue to get better week after week and look ourselves in the mirror and figure out what we’re doing wrong and how we can get better.”

By Josh Dubow an hour ago
By Jim Vertuno 3 hrs ago
By Dennis Waszak Jr. 5 hrs ago
5 hrs ago
By Barry Wilner 7 hrs ago