Getting hot for Kitchens as Browns fail to reach potential 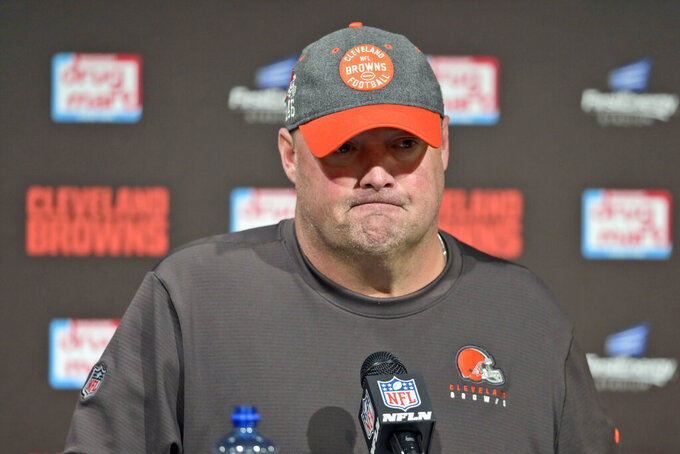 FILE - In this Oct. 13, 2019, file photo, Cleveland Browns head coach Freddie Kitchens answers questions after an NFL football game against the Seattle Seahawks, in Cleveland. Kitchens sold cars in Alabama before he got into coaching. So at least he’s got a fallback plan. The Browns’ first-year coach, whose selection was met with some skepticism because of his lack of experience, could be down to his final games if Cleveland doesn’t turn around a season that has derailed after beginning with sky-high optimism.(AP Photo/David Richard, File)

CLEVELAND (AP) — Freddie Kitchens sold cars in Alabama before he got into coaching. He may soon have to rely on those sales skills to make a case for keeping his job.

The Browns' first-year coach, whose selection was met with some skepticism because of his lack of experience, could be down to his final games if Cleveland doesn't turn around a season that has derailed after beginning with sky-high optimism.

Handed a talented team, Kitchens hasn't been able to mold the Browns (2-6) into anything close to resembling a playoff contender. He's got time, but it could be running short and a win over the Buffalo Bills (6-2) on Sunday would go a long way to helping him cool the hot seat he's currently occupying.

The Browns have lost four straight games and are winless at home. But more troubling for their fans, general manager John Dorsey and owners Dee and Jimmy Haslam, who green lighted his hiring, Kitchens is in charge of a team that has played with little discipline or cohesion since Week 1 and quarterback Baker Mayfield seems to be regressing.

One week, it's too many turnovers. The next, dumb penalties or questionable play-calling. Last week in Denver, it was a lack of execution in the red zone along with silly and scary distractions.

Fair or not, Kitchens is taking the heat for all of the Browns' many imperfections.

While there are problems, left guard Joel Bitonio doesn't think Kitchens should be blamed for everything. After all, he wasn't the one touting the Browns as a Super Bowl contender.

"It's a tough spot," said Bitonio, one of the team's captains. "You come into a team that has high expectations. You have a second-year quarterback. You have some new players who have big personalities, but in controlling that I think he's done a good job. Our locker room, we've had good morale. It's not like we're in a bad space. We feel good about it, now we just got to do the job on the field."

They've been one of the league's biggest surprises, off to their best eight-game start since 1993. Second-year quarterback Josh Allen is developing as hoped and the Bills are doing just enough to win.

But despite their success in the season's first half, the Bills aren't being viewed as legitimate mostly because of their schedule. Buffalo's six wins have come against opponents with a combined 9-44 record.

"Until we can consistently win in this league, it's always going to be doubters," said linebacker Lorenzo Alexander. "Buffalo has a perception nationally of still being that same team that didn't make the playoffs for 17 years. So until we actually do something, go to the playoffs consecutively, win a playoff game being able to make it to a championship and actually win a Super Bowl, people are always going to have that perspective. It's up to us to change that."

The Browns are hoping for an offensive boost from running back Kareem Hunt, who is eligible to play after serving an eight-game NFL suspension for two physical altercations.

Hunt is one of the league's most versatile backs, and he'll give Mayfield a short target and be another weapon for Kitchens, who may play him alongside Nick Chubb.

Though rookie running back Devin Singletary's production and playing time are up, the Bills insist 15-year veteran Frank Gore remains a key part of their offensive attack.

Singletary had a season-high 95 yards rushing, including a touchdown, and 45 receiving last week in a win over Washington.

One solution could be getting the ball more to star receiver Odell Beckham Jr., who has just one TD catch and has only been targeted seven times this season in the red zone.

"Until we do better in the red zone, all of us, it's going to be tough to feel like I need to get the ball when we get down there," Beckham said. "But I can smell blood when I get down there. I'm close to the end zone, I want it. It's just a matter of finding the right play in the right time."