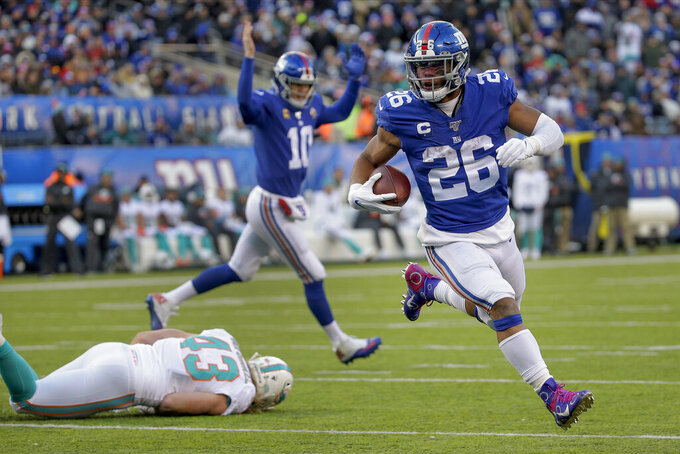 New York Giants running back Saquon Barkley (26) runs the ball into the end zone for a touchdown against the Miami Dolphins during the third quarter of an NFL football game, Sunday, Dec. 15, 2019, in East Rutherford, N.J. (AP Photo/Seth Wenig)

Mike Shula didn't need to look at the final statistics last weekend to know New York Giants running back Saquon Barkley had a good game against the Miami Dolphins.

All the Giants offensive coordinator had to do was watch some of the cuts Barkley made on some of his runs.

It was the correct angles, the 90-degree turns. He planted his foot, turned his body and lowered his shoulders. It was what Barkley did a lot as a rookie last season in finishing second in the NFL in rushing to Ezekiel Elliott of the Dallas Cowboys.

Those were missing much of this season as Barkley battled back from a high ankle sprain sustained in the third week of the schedule. He missed three games and then went seven without gaining 100 yards.

The drought ended Sunday when Barkley ran for 112 yards and two touchdowns. The most he rushed for in the previous seven games was 83 yards.

“We had a really good day rushing the football, and we really didn’t have, as you said, a lot of explosive plays," Shula said. "I think that’s a credit to him, as well as our offensive line, to be able to move the ball efficiently and gain that many yards on the ground, without like one run for 70 and the rest have a low average. Again, like some other things that we’ve talked about, I think there are some signs that are pointing in the right direction upfront and then with Saquon.''

Barkley had 24 carries in the game and his longest run was 12 yards.

Barkley has watched videotapes of his play after he returned from the ankle injury and he says he was not playing freely. He said someone landed on his ankle in his first game back against Arizona and he protected himself for a few weeks. Not anymore

He added what he wants in the final two weeks of the season are wins. He doesn't care he missed the Pro Bowl this season. He felt he didn't deserve it.

“What motivates me is that we’re going home in two weeks,” Barkley said. “That’s the only motivation that I have. We’re not in the playoff run, we’re not having the chance of the playoffs. That’s going to be my motivation this offseason.''

NOTES: QB Daniel Jones practiced fully Thursday and coach Pat Shurmur probably will start him against the Redskins. He missed two games with an ankle injury. ... S Antoine Bethea has missed the last two days after his wife gave birth. ... TE Rhett Ellison (concussion) was limited. He has missed the last four games. ... G Kevin Zeitler (ankle) was limited. He did not play last week. ... CB Antonio Hamilton (not injury related) did not practice.