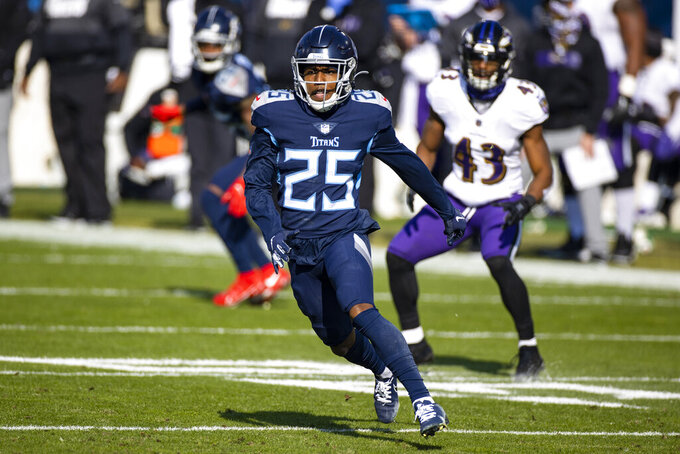 FILE - Tennessee Titans cornerback Adoree' Jackson (25) rushes against the Baltimore Ravens during the first quarter of an NFL wild-card playoff football game in Nashville, Tenn., in this Sunday, Jan. 10, 2021, file photo. The New York Giants gave it the old college try in signing cornerback Adoree Jackson and filling another glaring need in free agency. Hours after signing a three-year, $39 million contract, Jackson said he felt like a college recruit they way players and coaches pumped up the team in trying to get him to join the Giants. (AP Photo/Brett Carlsen, File)

Hours after signing a three-year, $39 million contract, Jackson said he felt like a college recruit the way players and coaches pumped up the team in trying to get him to join the Giants.

Second-year cornerback Darnay Holmes, a buddy from Los Angeles, sent him texts. Former Tennessee Titans teammate and fellow defensive back Logan Ryan had dinner with the 25-year-old Jackson. Safety Jabrill Peppers was in his ear telling him about the improving Giants, who went 6-10 in Joe Judge's first season as coach and just missed the playoffs.

“It meant a lot, just to have people reach out and be able to pick their brains and see what they were like, what they knew about the team and what they disliked,” Jackson said Tuesday. “But everybody spoke highly of it. So I was just great to have people want me to come here.”

The signing of Jackson is the latest move by general manager Dave Gettleman to fill gaps on both sides of the ball.

Jackson gives the Giants an experienced starting cornerback opposite James Bradberry. Bradberry shut down opposing receivers last season, but Pat Graham's defense struggled to find a player to handle the other side.

Jackson, who was released by the Titans earlier this month, said he is above all a team player who does his job and makes plays. He also wants to win and liked what he heard from Judge and his players. A foundation was laid last season to get New York back to the playoffs for only the second time since 2011. The '16 season under Ben McAdoo was the other year.

“Having the guys around that I’ve talked to, they understand what he’s (Judge) looking for and what he wants, just everybody on the same page and being cohesive,” Jackson said. “That’s the biggest thing, having guys that compete, having guys that are ball players, like the Giants have. You want to be a part of that. You want to play with guys like that.”

Jackson started 41 of 46 games for the Titans and has only two career interceptions. The first-round pick out of USC had 33 pass deflections, three forced fumbles and two fumble recoveries. He also can return kicks.

NOTES: Less than a week after signing inside linebacker Reggie Ragland, the Giants have reached a deal with another former Alabama linebacker. A person with knowledge of the contract talks said the Giants have a tentative agreement on a one-year, $1.2 million contract with outside linebacker Ryan Anderson. He spent the past four seasons with Washington, playing in 52 games with four starts. He has six career sacks, five forced fumbles and four fumble recoveries. The source spoke on the condition on anonymity because the team isn't expected to announce the signing until later this week.