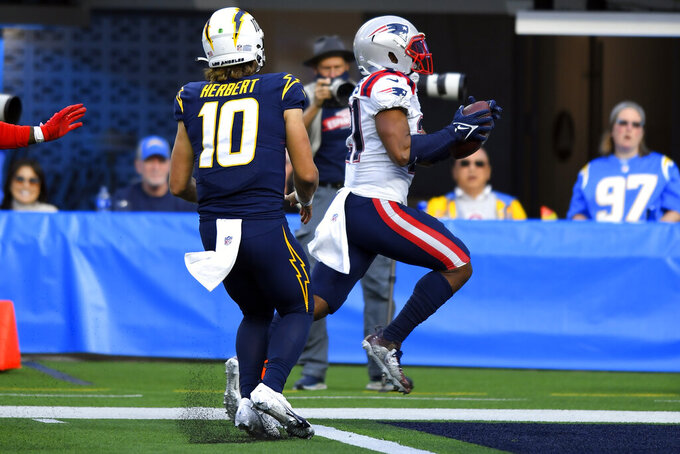 Justin Herbert has set quite a standard in less than two seasons as the Los Angeles Chargers quarterback that struggles in two straight games — albeit against Baltimore and New England — end up generating cause for concern.

But coach Brandon Staley tried to calm any sense of panic after Herbert threw two interceptions in Sunday's 27-24 loss to the New England Patriots.

“People expect for him to throw for 300 to 400 yards, four touchdowns and no interceptions. And that's a good thing. He set that standard himself,” Staley said on Monday. “But he's still seeing things a lot for the first time. There's going to be some setbacks and disappointments. That's what I told him yesterday.”

Herbert was on track for career lows in completion percentage and yardage until a touchdown drive late in the fourth quarter had him finish 18 of 35 for 223 yards and two TDs. The 66.7 passer rating marks the first time in his 22 starts he had a rating under 70 in consecutive games. He had a 67.8 rating in a 34-6 loss to Baltimore on Oct. 17.

Herbert and wide receiver Keenan Allen said the Patriots played a lot of Cover 2, which they had not seen on film leading up to Sunday's game. Even on some of the adjustments, Herbert was not on the same page on most plays with his receivers, including on a checkdown intended for tight end Jared Cook that was picked off by former Charger Adrian Phillips and returned for the go-ahead touchdown. That was first of Herbert's 16 career interceptions that had resulted in a pick-6.

When it comes to lessons learned from the loss, Herbert said moving on to the checkdown option quicker was the biggest takeaway.

“If the defense drops everyone out and if there is nothing down the field, you have to find your checkdown, you have to take off and find 4 to 5 yards, however you can get it,” he said. "That is just the tough part about playing quarterback and is something that I need to get better at.”

Besides Herbert making adjustments, Staley said his first-year coaching staff also needs to step up after two tough losses that have them at 4-3 and trailing Las Vegas by a game in the AFC West.

Los Angeles is running the ball on only 34.9% of its offensive plays — the fourth-lowest rate in the league — but it is averaging 4.6 yards per carry, which is tied for seventh. They had 163 yards against the Patriots, which is their second-best total this season.

Kickoff and punt returns continue to be a work in progress. Andre Roberts was signed to be the return specialist during the bye week, but only one of his three kick returns went beyond the 25-yard line. The Chargers have a league-worst average drive start of the 21.5-yard line after kickoffs.

Kicker Dustin Hopkins, who was signed on Oct. 26 to replace Tristan Vizcaino, made a 48-yard field goal along with all three of his extra-point attempts. Three of Hopkins' four non-onside kickoffs went for touchbacks.

Mike Williams was tied for third in the AFC in receptions (31) after the first five games, but he has only four catches for 46 yards in losses to Baltimore and New England as teams have started to take away the Chargers' short-passing game.

29.2% — That's the Chargers' third-down conversion rate over their past two games and is fifth-worst in the league over the past three weeks. Los Angeles was 33 of 68 on third down in its first five games, fourth-best in the league.

The Chargers travel to Philadelphia, and first-year Eagles coach Nick Sirianni was on the Chargers' staff from 2013-17.