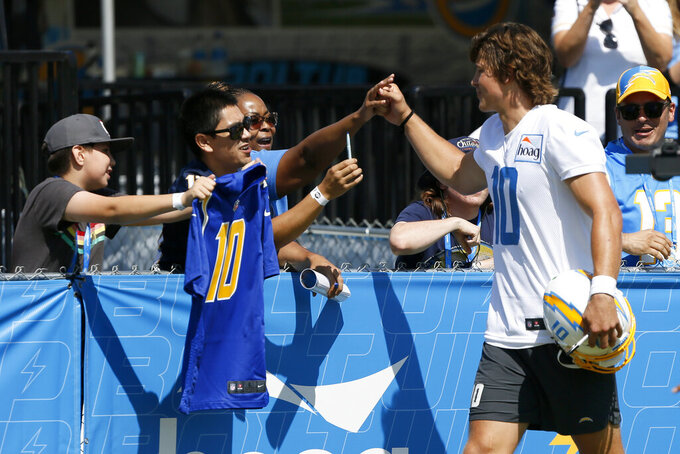 Herbert gets a bit of a pass, though, as getting to see Bolts fans is a new experience after they weren't allowed at training camp or games last year due to the coronavirus pandemic.

While some players threw autographed footballs into the crowd after Wednesday's first practice at the Jack Hammett Sports Complex, Herbert ran up and down the sideline, taking photos, signing autographs and exchanging high fives with fans who gathered along the fence.

“I’ll make sure to wash my hands and keep my distance next time,” Herbert said. “I wanted to say thank you to the fans and have their support in as year as a weird as it was. It’s good to be back out here.”

It was one of the few mistakes for Herbert during a crisp 75-minute practice to open training camp under new coach Brandon Staley. Even though the session was scheduled for two hours, Staley said the short time on the field was by design.

The Chargers won't have their first practice in pads until Monday. Their first preseason game will be Aug. 14 against the Rams before they open the regular season on Sept. 14 at Washington.

“I wanted our guys to kind of get to the end of the practice and say, 'Hey, I could have gone longer than that.' This is our first time competitively to get together going 11 on 11," Staley said. "We’ll try to phase this in properly, get our guys the right tactical work, but make sure that we’re building during training camp.”

Herbert, who threw for 4,336 yards and 31 touchdowns last season to win Offensive Rookie of the Year honors, feels like he has a good grasp of the system new offensive coordinator Joe Lombardi is installing.

Even though Herbert's top two targets are back in wide receiver Keenan Allen and running back Austin Ekeler, he has to get acclimated to a rebuilt offensive line that features four new starters. He is also spending plenty of time building a rapport with tight end Jared Cook, who has experience with Lombardi's system after both came from New Orleans.

While improvement from the end of minicamp to the start of training camp can't be immediately measured over the first couple days, one area where it can is the team's vaccination numbers. After having one of the lowest percentages of vaccinated players last month, the Chargers are near 90% of the roster either being fully vaccinated or in the process of receiving their second shot. That is slightly above the league average.

Herbert said last month during minicamp that he had received the vaccine.

“I think it’s great because a lot of information is being spread, guys are getting informed and making the decision that’s best for them. As long as you’re making the best decision for yourself, your family, for those around you. I think we’re able to celebrate that,” he said.

Staley also said he was encouraged about the vaccination numbers as well as players seeking more information in making a decision.