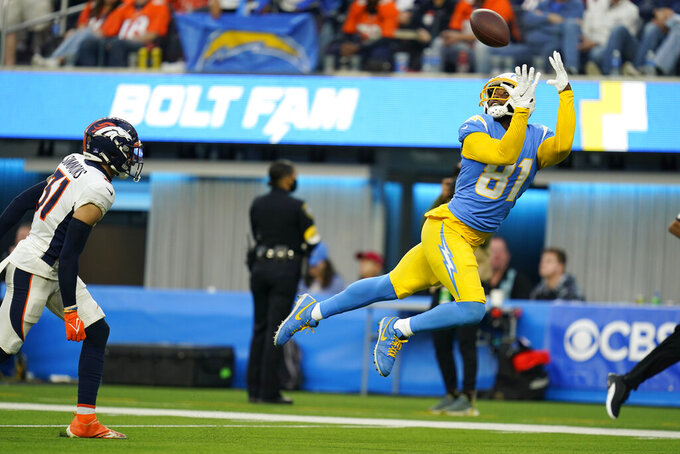 INGLEWOOD, Calif. (AP) — Justin Herbert and the Los Angeles Chargers are back to controlling their playoff future.

The Chargers got help with a couple losses earlier Sunday and then took care of business with a convincing 34-13 victory over the Denver Broncos. Herbert threw for two touchdowns and set the franchise single-season record while Andre Roberts returned a kick 101 yards for a score.

Los Angeles (9-7) is in the final wild-card spot but needs a win at Las Vegas next week to wrap up its first postseason berth since 2018. The Colts, Chargers and Raiders all have the same record, but the Chargers currently hold the tiebreaker over Las Vegas after their 28-14 victory on Oct. 4.

“Each week has a life of its own in the NFL. It’s having a life of its own since the beginning, and that’s the way we need to treat things around here," coach Brandon Staley said. “And the more, the longer that we’re here, the more people will realize that every week is going to feel like this coming week.”

Herbert, the AFC starter for the Pro Bowl, has 35 touchdown passes this season, surpassing Philip Rivers' 2008 mark of 34. Herbert tied it with 14 seconds remaining in the first half on an 8-yard throw to Keenan Allen to give the Bolts a 17-0 lead. He set the mark early in the fourth quarter on a 45-yard TD to Mike Williams, which put the Chargers up 34-6.

Herbert also became the fastest player to reach 800 career completions (31 games) and at 23 years, 298 days is the second-youngest player in league history to get to 65 TD passes.

“I think it’s special because I was a Chargers fan growing up and I knew about all those guys (Dan Fouts and Rivers) and I’ve watched ’em all and they’re football legends," said Herbert, who completed 22 of 31 passes for 237 yards. “To be even in the same conversation with them is a huge honor.”

Roberts became the first Charger since 2012 to score on a kickoff return. After Brandon McManus kicked his second field goal early in the fourth quarter, Roberts got blocks from Chris Rumph II and Jalen Guyton, then from Stephen Anderson and Cole Christiansen to extend the lead to 27-6.

The fourth-longest kickoff return in franchise history snapped a 143-game drought. Michael Spurlock was the last to do it in the 2012 regular-season finale against the Raiders.

Denver (7-9) has lost four of its last five, was eliminated from playoff contention and is assured of its fifth straight losing season. The Broncos were missing quarterback Teddy Bridgewater for the second straight week; five defensive starters were also out.

Drew Lock was 18 of 25 for 245 yards and a touchdown. Noah Fant had six receptions for 92 yards, including a 5-yard score midway through the fourth quarter.

“For me personally, I feel like my No. 1 goal is to win a football game,” Lock said. “Taking care of the ball and not winning a football game and a quarter will get you a donut. There’s really not much that not winning the game gets you.”

The Chargers had one of their better defensive efforts of the season. They snapped a 10-game streak of allowing at least 21 points and held the Broncos to 81 yards rushing. Denver had 147 yards on the ground in its 28-13 victory on Nov. 28.

Denver went twice on fourth-and-goal inside the LA 5-yard line but came up short.

Trailing 10-0 in the second quarter, the Broncos drove to the Chargers 2-yard line. Lock handed off to Mike Boone, who then flipped the ball to Kendall Hinton. Chargers safety Nasir Adderley hit Hinton as he passed the ball, but Lock went down to one knee to catch it at the 7.

Despite the off-balance pass, Lock had a path to the end zone, but was stopped by Joey Bosa and Chris Harris Jr. just shy of the goal line.

In the fourth quarter, Melvin Gordon appeared to score on a 1-yard run, but the play was nullified by an illegal formation. The Broncos then brought out McManus for a 23-yard field goal.

“The second one, they said we lined up in an illegal formation,” Broncos coach Vic Fangio said. “That killed one touchdown. The other one, we tried a special play. It was open, but there was disruption, and we didn’t make it. But we’ve got to find a way to punch that in, obviously.”

McManus hit a career-long 61-yard field goal on the last play of the first half. McManus had missed all six of his previous attempts from at least 60 yards.

ANOTHER CENTURY MARK FOR EKELER

Los Angeles running back Austin Ekeler had 112 scrimmage yards (58 rushing, 54 receiving) and had a 3-yard touchdown on the opening possession. Ekeler is second in the league with 18 scrimmage touchdowns, including 11 rushing, and has scored in the last seven games he has played.

Broncos: Left guard Dalton Risner suffered an elbow injury on the opening drive and did not return.

Chargers: Center Corey Linsley came out in the first quarter due to a back injury and did not return.

Broncos: Host the Kansas City Chiefs on Saturday in the regular-season finale.

Chargers: At the Las Vegas Raiders next Sunday night.