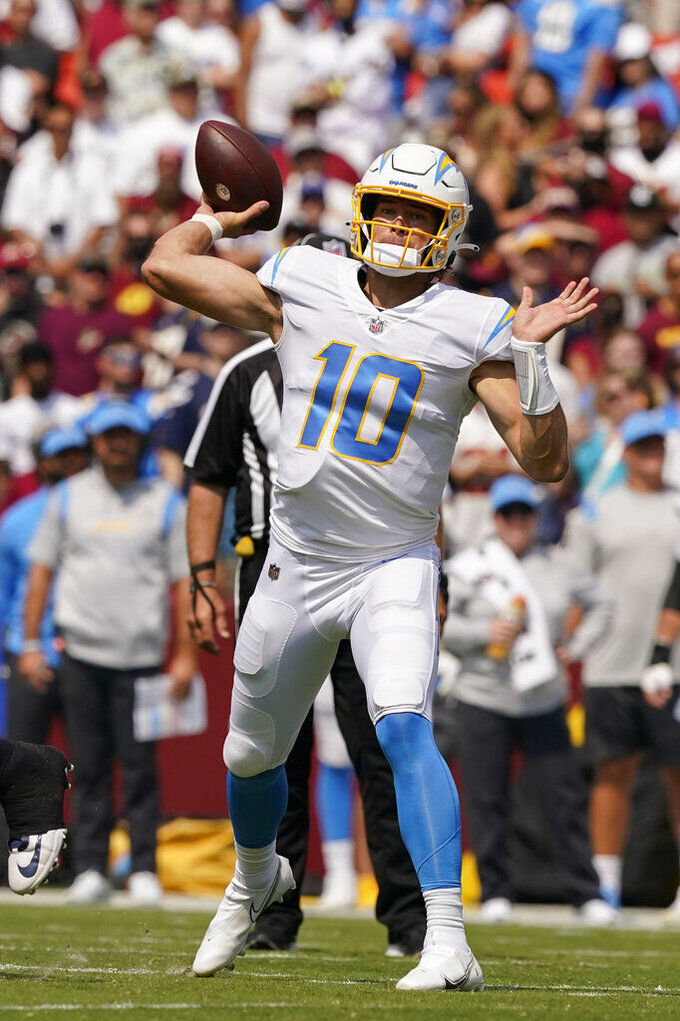 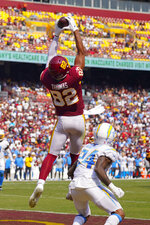 "You were outstanding,” Staley told him.

Herbert and the Chargers excelled on third down to give Staley a victory in his first game running the sideline, beating Washington 20-16 Sunday in a sloppy Week 1 matchup full of turnovers and big penalties. Herbert threw for 337 yards and a touchdown, overcoming a fumble into the end zone and a red zone interception and leading an offense that went 14 of 19 on third down.

“Fourteen of 19 — that's unheard of,” said Herbert, who completed 31 of 47 passes and joined Kansas City’s Patrick Mahomes as the only players in league history with 4,500 yards passing in his first 16 career starts. “For us to be that efficient ... that’s big for our offense.”

Herbert led scoring drives of 75, 76 and 68 yards, and a go-ahead touchdown pass to Mike Williams made up for his mistakes on consecutive possessions. There was also the 6-plus-minute drive late in the fourth quarter that salted away the clock and ended with Herbert kneeling in the victory formation, a major improvement for L.A. after losing so many close games last season.

“In that huddle on the last drive, we were telling each other, ’Hey, we’ve got to make all the plays, do whatever we need to do so we can go home happy,'” wide receiver Keenan Allen said.

The teams combined for 14 penalties for 151 yards and three giveaways. Antonio Gibson's fumble inside the Washington 5-yard line set up the Chargers' shortest but most important scoring drive that ended with Herbert's TD pass to Williams.

Los Angeles also got a 3-yard TD run from Austin Ekeler, who rushed 15 times for 57 yards and showed he was good to go after being questionable with a left hamstring injury.

“Fantasy football owners, we made it to Week 1,” said Ekeler, who had more than 50 text messages earlier in the week when he missed practice for what he called precautionary reasons. “We made it through. Hopefully I got points for y'all."

Staley became just the second Chargers coach to win his debut, an emotional victory that came on his late mother's birthday.

“She would be happy, but not satisfied because we didn’t play our best,” Staley said. “I love and miss her dearly, and I'm really good that we’re leaving here on a positive note."

Washington lost veteran starting quarterback Ryan Fitzpatrick to a right hip injury midway through the second quarter. Coach Ron Rivera did not have an update on Fitzpatrick and said he hopes to know more about the 38-year-old's status Monday.

“He’s in good spirits,” tight end Logan Thomas said. "Obviously not real sure what it is yet, but hoping for the best for him.”

Fitzpatrick was replaced by popular backup Taylor Heinicke, whose name was chanted by fans still remembering his surprise playoff heroics in the wild-card round loss to eventual Super Bowl champion Tampa Bay.

Even though the FitzMagic never materialized, Heinicke had some of his own special moments, including a perfect pass to top receiver Terry McLaurin and a TD throw to tight end Logan Thomas. Heinicke was 11 of 15 for 122 yards and could be Washington's starter moving forward.

"There is something about Taylor," Rivera said, adding Heinicke's ability to improvise gave Washington's offense a spark.

After not being targeted by Fitzpatrick, McLaurin made quite the splash early in the third quarter with a highlight-reel catch. Heinicke dropped the ball in perfectly for McLaurin along the sideline, and he came down with it for a 37-yard gain after it went through safety Derwin James' outstretched arms.

The next play was Heinicke's TD pass to Thomas.

Chargers kicker Tristan Vizcaino connected on field goals of 33 and 27 yards. Washington’s Dustin Hopkins was good from 30, 43 and 48 and missed from 51 yards.

The Chargers lost right tackle Bryan Bulaga to a back injury in the third quarter and safety Nasir Adderley to a shoulder injury early in the fourth. Staley said Bulaga just did not feel well enough to go back in and considers him day to day with a lower-back issue.

Bulaga battled various injuries during training camp and was derailed by back problems last season. He was replaced by Storm Norton on the offensive line that protected Herbert well.