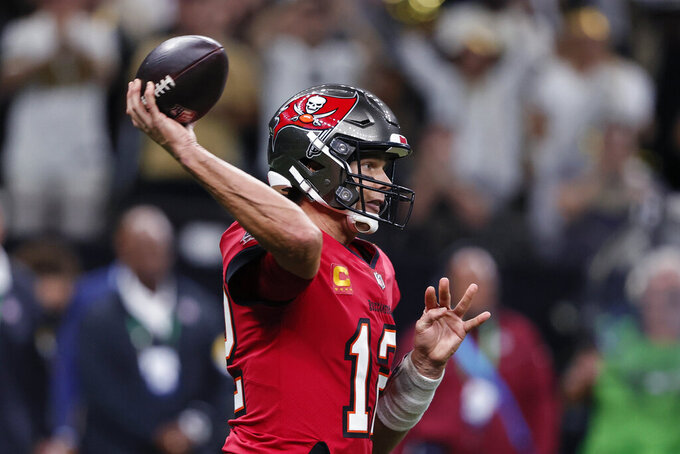 BETTING LINE: Buccaneers by 9½, according to FanDuel SportsBook.

AGAINST THE SPREAD: Buccaneers 3-5; Washington 1-7.

LAST MEETING: Buccaneers beat Washington 31-23 on Jan. 9 in the wild-card round at Landover, Maryland.

TURNOVER DIFFERENTIAL: Buccaneers plus-4; Washington minus-4

BUCCANEERS PLAYER TO WATCH: QB Tom Brady is on pace to for personal bests in touchdowns and yards passing. Through eight games, the seven-time Super Bowl champion has thrown for 2,650 yards and a league-high 25 touchdowns, along with five interceptions. He’s thrown for four or more TDs in five games this season.

WASHINGTON PLAYER TO WATCH: With fellow edge rusher Montez Sweat out several weeks with a broken jaw, the pressure is on reigning Defensive Rookie of the Year Chase Young, who has just 1½ sacks this season.

KEY MATCHUP: Brady could pick apart Washington's Landon Collins if he targets the safety who has been mostly used at linebacker. Washington's entire defense faces an uphill task to contain Brady.

KEY INJURIES: The Buccaneers have been hit hard, especially on defense. CBs Sean Murphy-Bunting (dislocated elbow), Carlton Davis (quad) and Richard Sherman (hamstring) have all missed significant time. Murphy-Bunting hasn’t played since Week 1, however, he's back at practice and could be activated as soon as Sunday. The status of TE Rob Gronkowski (ribs) and WR Antonio Brown (ankle) remains uncertain. ... WR Chris Godwin missed practice Wednesday with a foot injury. ... Washington expects to get 2020 All-Pro RG Brandon Scherff, rookie RT Sam Cosmi and CB William Jackson back, but TE Logan Thomas (hamstring) and WR Curtis Samuel (groin) are expected to be out again.

SERIES NOTES: The Buccaneers and Washington last played in the regular season Nov. 11, 2018. Washington won 16-3. ... The last time these teams played at FedEx Field in the regular season, Washington beat Tampa Bay 31-30 on Oct. 25, 2015. ... Brady is 5-1 in his career against Washington, counting the playoff game last season. He has thrown for 15 TDs in those six starts. Washington's only win against Brady-led team came Sept. 28, 2003 when he was with New England. ... Buccaneers coach Bruce Arians is 3-1 against Washington. Ron Rivera is 12-7 against Tampa Bay.

STATS AND STUFF: The Bucs are in a stretch in which they’ll play four of five games on the road. The remainder of their schedule includes just two games against an opponent that currently has a winning record. ... Brady is coming off a four TD, two INT game against New Orleans. ... RB Leonard Fournette had 132 yards from scrimmage in Tampa Bay's playoff win at Washington. ... WR Mike Evans made his eighth TD catch of the season against the Saints. He's the only player in the NFL with eight-plus TD receptions each of the past four seasons. ... LB Jason Pierre-Paul has 12½ sacks in 13 career games against Washington. ... LB Shaquil Barrett has at least one sack in four of his past five games. ... Washington has lost its first game out of the bye each each of the past three seasons. ... QB Taylor Heinicke's first start for Washington came in the playoff game against Tampa Bay when Alex Smith was injured. Heinicke ran for 46 yards and a touchdown and threw for 306 yards and a TD in a performance that earned him a two-year contract. This is set to be Heinicke's 10th career NFL start. ... Heinicke has completed 63.9% of his passes for 1,928 yards, 11 TDs and nine interceptions since taking over for injured starter Ryan Fitzpatrick in the season opener. ... RB Antonio Gibson got only eight carries in the loss at Denver while continuing to play through an injured shin. Gibson could again split duties with J.D. McKissic and rookie Jaret Patterson. ... WR Terry McLaurin leads Washington with 573 yards receiving. The other six receivers with a catch have combined for 557. ... DT Jonathan Allen leads Washington with six sacks.

FANTASY TIP: Given Washington's defensive struggles, especially against the pass, Brady and any and all of his possible targets could be in for some big numbers.