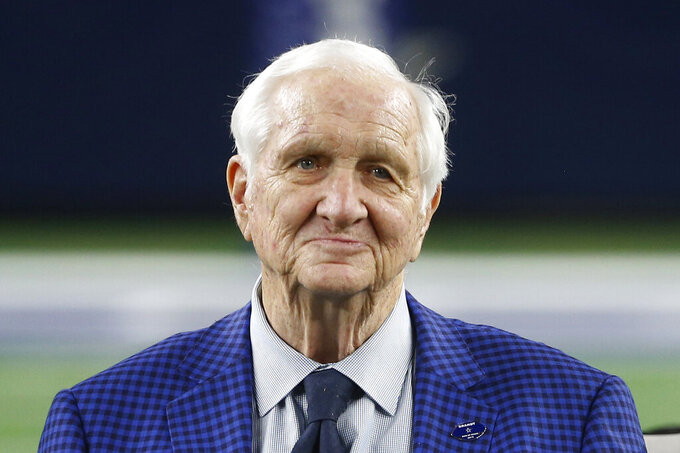 FILE - In this Nov. 29, 2018, file photo, Gil Brandt is honored during his induction into the Dallas Cowboys Ring of Honor during half-time of an NFL football game between the Dallas Cowboys and the New Orleans Saints, in Arlington, Texas. Brandt will be inducted into the Pro Football Hall of Fame in Canton, Ohio on Aug. 3, 2019. (AP Photo/Ron Jenkins, File)

DALLAS (AP) — Gil Brandt is finally going into the Pro Football Hall of Fame, nearly three decades after Tom Landry and Tex Schramm were enshrined a year apart for their roles in the rise of America's Team, the Dallas Cowboys.

If the former player personnel director who helped build one of the most iconic brands in sports ever felt overshadowed by his more famous coach and general manager, it doesn't really matter now that the triumvirate from the club's first 29 years is about to be together in Canton, Ohio.

And by the way, Brandt doesn't feel overshadowed.

"I think we all got credit," said Brandt, who will be inducted Saturday. "And I think Tex rightfully so got more credit than Tom and myself. Because he was a very media savvy person. When somebody from Sports Illustrated called, they didn't talk to Tom, they didn't talk to me. They talked to Tex.

"But it was not a concern of mine at all."

Brandt was voted in as a contributor mostly because of the innovations he helped introduce in scouting in the 1960s, but also because of how active the 86-year-old remains in the NFL so many years after Dallas owner Jerry Jones fired him following the 1989 draft.

The dismissal of Brandt came a couple of months after Jones dumped Landry as soon as he bought the team. Schramm's resignation quickly followed.

The Hall of Fame wasted little time recognizing those two. Landry was inducted in 1990, 10 years before he died. Schramm's 1991 enshrinement came 12 years before his death. The trio reached five Super Bowls, winning two.

"How could you not be overshadowed by Tex and Tom?" asked a chuckling Cliff Harris, a former safety who was among the small-college players who became All-Pros after being targeted by Brandt. "Everybody was."

It's appropriate that Brandt's second career in pro football started with the internet and was fueled further by social media. He helped the Cowboys bring the computer age to the NFL soon after the franchise's birth in 1960.

The Cowboys assigned values to physical — and mental — characteristics of players. Brandt likes to tell the story of how Vince Lombardi chided them by asking if their computer had broken down while Dallas held up the 1964 draft waiting for medical information on Mel Renfro before taking the future Hall of Fame defensive back in the second round.

"I think Gil, in terms of quantifying so many things about scouting, was really ahead of his time," said Calvin Hill, a running back taken in the first round in 1969. "They could look at all the individual things that go into making a player and a teammate and tried to quantify it."

While the Cowboys developed a Hall of Famer out of a track star in receiver Bob Hayes of Florida A&M, they also found a four-time All-Pro on the basketball court at Utah State in cornerback Cornell Green.

There were plenty of future stars among high draft picks from bigger schools, such as TCU's Bob Lilly, the first draft choice for the Cowboys in 1961, and Alabama linebacker Lee Roy Jordan, their top selection two years later.

But the list of lower-round picks or undrafted players, particularly from smaller schools, stands out as much as anything else. Brandt often mentions Jethro Pugh, an unsung defensive lineman taken in the 11th round in 1965 out of tiny Elizabeth City State in North Carolina.

Pugh played for the first five Dallas teams to reach the Super Bowl, as did Roger Staubach. The Hall of Fame quarterback was a 10th-round choice a year before Pugh, with the Cowboys taking him while knowing Staubach's arrival would be delayed five years by a Navy commitment.

"It starts with the computer," Brandt said. "No one will ever know how many hours we spent with that. And that was really the thing that set us apart originally from everybody."

Harris believes Brandt set himself apart by building relationships with coaches from smaller schools, which led him to information that other teams simply weren't getting. Hill, who went to Yale, points to the tireless pursuit of information to plug into the computer.

"He could go to the trainer at Yale and ask him about a kid at Harvard or a kid at UConn or a kid that we had played against," Hill said. "'What do you know about him? What do you think about him?' So he was always cross-checking."

Brandt said late Oakland Raiders owner Al Davis tried to hire him before the 1989 draft by telling him he had heard Jones was going to fire him after the draft. Brandt didn't believe it, and probably wouldn't have done it anyway because Dallas had become home for the Wisconsin native.

Animosity for Jones didn't last long for Brandt, who has maintained a presence around the Cowboys and asked the flamboyant billionaire to be his presenter in Canton.

Brandt's longevity also has turned him into one of the few unofficial historians for the NFL — a good time for that role because the league is celebrating its 100th anniversary the same year he's going into the Hall of Fame. Plus, he has nearly 150,000 followers on Twitter.

And Hill believes the hall nod is long overdue among player personnel directors.

"To me," Hill said, "Gil should have been the first one in terms of certainly from a personnel standpoint."