Hot Darnold hopes to get Panthers on track vs. Hurts, Eagles 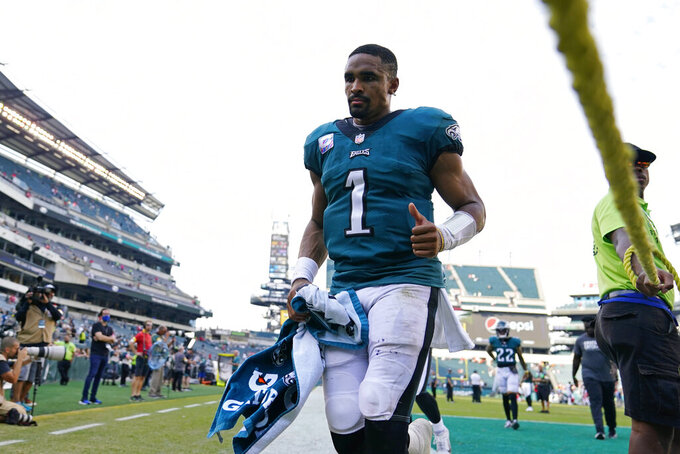 OPENING LINE: Panthers by 3 1/2, according to FanDuel SportsBook.

EAGLES PLAYER TO WATCH: Wide receiver DeVonta Smith set career highs vs. Kansas City with 122 yards receiving and seven receptions. The 2020 Heisman Trophy winner also had a TD catch negated because he was pushed out of bounds before coming back in to make the play.

PANTHERS PLAYER TO WATCH: WR D.J. Moore is emerging as QB Sam Darnold's favorite target. Moore had eight catches for 113 yards and two TDs against Dallas and is second in the NFL in receptions (30) and fourth in yards receiving (398).

KEY MATCHUP: Panthers QB Sam Darnold vs. Eagles secondary. Darnold continues to impress in Carolina, combining for four touchdowns — two rushing and two passing — in last week’s 36-28 loss to Dallas. He will face a Philadelphia defense that has allowed a whopping 83 points and 851 total yards in the past two weeks.

KEY INJURIES: Eagles RT Lane Johnson left the team before last Sunday’s game because of a personal matter and hadn’t returned midweek, leaving his status uncertain. ... LT Jordan Mailata missed the past two games with a knee injury but has returned to practice in limited form. ... Panthers RB Christian McCaffrey returned to practice Wednesday after missing last week's game with a hamstring injury, but his status for Sunday remains unclear. Chuba Hubbard will start if McCaffrey is out. ... The Panthers will be without LB Shaq Thompson (foot), another blow to a defense that put two other starters — CB Jaycee Horn (foot) and safety Juston Burris (groin) — on injured reserve last week.

SERIES NOTES: The Panthers have won three of their last five games, but very few players remain on either roster from their last meeting four years ago. ... The most memorable contest came in the 2003 season when the Panthers defeated Donovan McNabb and the Eagles 14-3 in Philadelphia in the NFC championship game to advance to their first Super Bowl. The Panthers would go on to lose to Tom Brady and the New England Patriots in Super Bowl 38.

STATS AND STUFF: The Eagles have lost three straight. Since beating the Falcons 32-6 in the season opener, the Eagles have been outscored 100-62 in their last three games. ... QB Jalen Hurts threw for a career-high 387 yards and two TDs and ran for 47 yards in a 42-30 loss to the Chiefs last week. He has thrown for at least 300 yards in four of his eight career starts. ... TE Zach Ertz had nine receptions for 138 yards in his last meeting with Carolina. ... WR Greg Ward has caught a TD pass in his last two games. ... C Jason Kelce will make his 110th consecutive regular-season start. He’s the only offensive lineman to start every game. The Eagles have used different line combinations each week. ... DT Javon Hargrave is one of three NFC players with at least five sacks this season. ... The Panthers are 2-0 at home this season. ... Carolina has a plus-31 point differential through four games. ... Coach Matt Rhule is 8-12 since taking over the Panthers. ... Darnold's five TDs rushing are the most ever by an NFL quarterback through four games. ... Panthers LB Haason Reddick has 12 sacks and seven forced fumbles in his last eight games with the Cardinals and Panthers. ... DE Brian Burns has six sacks in his last six games. ... CB Stephon Gilmore, acquired via trade with the Patriots on Wednesday, remains on the PUP list and will not play. He is eligible to play in Week 7 vs. the New York Giants.

FANTASY TIP: The Panthers' defense had 14 sacks through the first three games, but none against Dallas. The Eagles have allowed eight sacks through four games and their offensive line has been a revolving door, so this could be a big week for Burns and Reddick.