How paths might have changed under expanded NFL playoffs 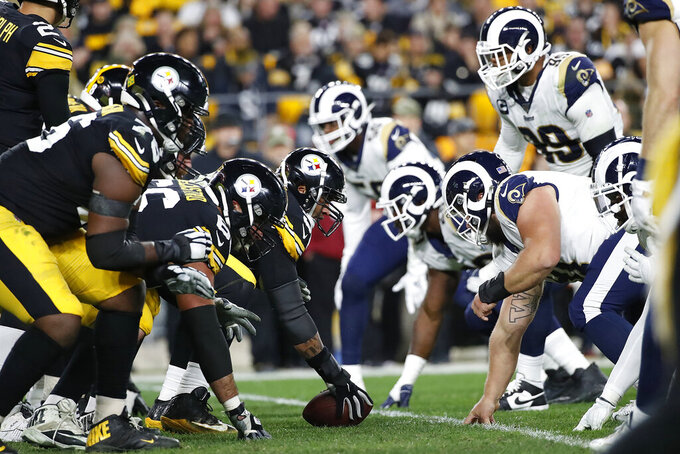 FILE - In this Nov. 10, 2019, file photo, the Pittsburgh Steelers offense, left, lines up against the Los Angeles Rams' defense during the first half of an NFL football game in Pittsburgh. The NFL's decision to expand the playoffs from 12 to 14 teams this season could have a major impact on the league based on how things have played out in the past.(AP Photo/Don Wright, File)

Lovie Smith's coaching tenure in Chicago might not have ended had the Bears made the playoffs his final three seasons instead of missing out by one spot his last two years.

Playoff droughts in Cleveland and Tampa Bay wouldn't be nearly as long or painful had the Browns and Bucs sneaked their way into the postseason as the third wild card in 2007 and '16, respectively.

The last two Super Bowl champions could have had a tougher time winning titles if Kansas City (2019) and New England (2018) had to play games on wild-card weekend instead of earning byes.

The NFL's decision to expand the playoffs from 12 to 14 teams this season could have a major impact on the league based on how things have played out in the past.

While some might complain of a dilution of quality, the percentage of teams that made the playoffs with 32 franchises under the new format (43%) is essentially the same as it was from 1990-94 (44%) when the then-28 team league last expanded the playoffs from 10 to 12 qualifiers.

The NFL has been playing under this format of eight division winners and four wild-card teams since Houston was added as an expansion franchise in 2002.

During that span, the difference in the average record of the seventh-place team (9.1 wins per season) in each conference was negligible when compared to the worst team that made the playoffs each season (9.2), whether it was as the fourth-seeded division winner or the second wild-card team.

In all, 23 franchises would have benefited from at least one more playoff berth, led by Minnesota and Pittsburgh with four extra trips each. New Orleans, Atlanta, Chicago, Denver, Houston, Tennessee and Tampa Bay — yes, Tampa Bay, which hasn't made the postseason since 2007 — all would have had two more playoff appearances if the seasons had played out the same way.

Under the format in place since 2002, no team with a losing record would have gotten the third wild-card spot and the extra team would have been more likely to be a double-digit winner (nine times) than a .500 team (eight times).

Here's a look at some of the impact the new format could have had if things played out the same way since 2002:

In many years the extra games would have either looked like duds or massive mismatches on paper. Devlin Hodges and the 8-8 Steelers matching up with eventual Super Bowl champion Kansas City last season, for example. But in other years, the extra game would be an intriguing one. Here are a few of the best:

2018: No. 7 Pittsburgh at New England. The Steelers beat the Patriots 17-10 at home in Week 15 and could have had another shot in the wild-card round.

2010: No. 7 New York Giants at Chicago. Eli Manning and the Giants proved they are more than capable of making a Super Bowl run out of wild-card weekend. The 10-win 2010 version that missed the playoffs thanks to the strength of victory tiebreaker with eventual champion Green Bay, might have been a better overall team than the 2007 and '11 Super Bowl winners. The Giants at least would have been a good match for the Bears team that made it to the NFC title game thanks to the bye and a win at home over seven-win Seattle in the division round.

2003: No. 7 Minnesota at St. Louis. A Week 17 collapse in Arizona cost the Vikings a playoff berth. Had they made it, a team led by Daunte Culpepper and Randy Moss could have provided a good match for Marshall Faulk, Torry Holt and the Rams.

While much of the focus has been on the extra team that would have made the playoffs, the bigger impact might be on the team that misses out on the bye. In the past seven seasons, no team that has played on wild-card weekend has gone to the Super Bowl. While much of that can be attributed to the quality of the top teams, the extra rest and one less chance of an upset are also major factors.

Nine times in the 18 years of the current format, a team seeded second in its conference made it to the Super Bowl, with the Chiefs and Patriots winning it all that way the past two seasons.

Four coaches were fired after finishing seventh in the conference, decisions that could have been different had their teams made the postseason those years. Smith had back-to-back seventh-place finishes for Chicago in 2011-12 after making it to the NFC title game the previous year. He was fired after winning 10 games in 2012 and the Bears have made it to the playoffs just once in eight seasons since.

The Steelers would have a 10-year run of playoff appearances with an extra berth, having come in seventh four times since 2010, while making the postseason the other six years. In fact, coach Mike Tomlin would have made it to the playoffs in 12 of his 13 seasons in Pittsburgh.

New England would have an even longer run of 17 straight playoff berths, having coming in seventh with an 11-5 record in 2008 when Matt Cassel replaced an injured Tom Brady as starter in the season opener.

The two teams with the longest current playoff droughts would have had a little less pain. The Bucs, who last made it under Gruden in 2007, would have qualified the following year and in 2016 under the new format.

The Browns, who haven't been to the postseason since 2002, would have made it as a 10-win team in 2007 under coach Romeo Crennel.

So maybe the Bucs have even more going for them in their 2020 playoff chase than that new quarterback — what's his name?