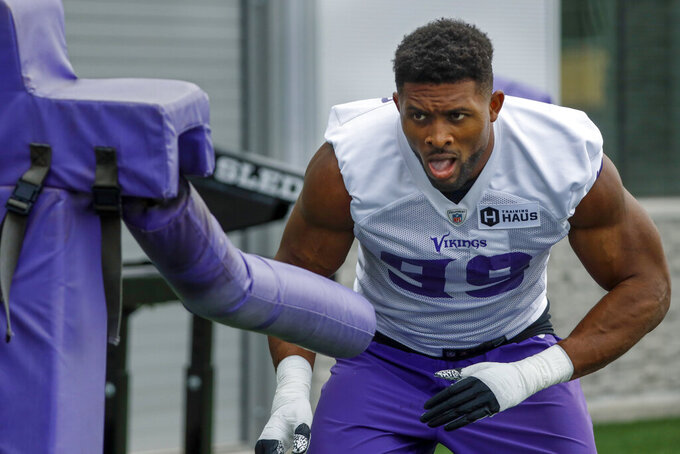 EAGAN, Minn. (AP) — Danielle Hunter’s return from the neck surgery that kept him out all of last season should boost a Minnesota Vikings’ pass rush that slipped to 28th in the league in sacks last year.

The physically imposing Hunter still has the look to his teammates of being the star pass rusher, with fellow defensive end Stephen Weatherly calling him a “freak.”

Weatherly and the Vikings’ task now is finding a complement on the other side of the defensive line to take pressure off Hunter. The ongoing search led Weatherly to be the only projected starter to play in the preseason opener last week, signifying a competition that is still wide open.

“To be fair, they both have to play,” co-defensive coordinator/defensive line coach Andre Patterson said of Weatherly and D.J. Wonnum. “I didn’t think it was fair for Stephen not to play and for D.J. to play, and that’s why I made the decision they both would play. They both played the same amount of reps. They both did some good, and they both did some bad. The evaluation continues through the next preseason game.”

A trade prior to the regular season for Yannick Ngakoue never provided the expected impact. He ended up leading the team with five sacks in six games before being traded. Ifeadi Odenigbo, now with the New York Giants, was second with 3 1/2 sacks.

Wonnum had three sacks in his rookie season after being drafted in the fourth round.

“It was big as far as the technique, as far as being able to read offensive schemes and being able to know what’s coming before it happens,” Wonnum said of his offseason.

Weatherly played for the Carolina Panthers after signing a two-year contract. He returns to Minnesota, where he played four seasons mainly as a situational pass rusher.

“It was definitely an adjustment coming back and, the way Andre Patterson likes his defensive linemen to execute with technique,” Weatherly said earlier in camp. “I do have to get back into the groove of things the way he likes them. There’s a difference and I like it. There’s a standard that’s required to play.”

The competition took an interesting turn when the team worked out Everson Griffen this week. Griffen had 74 1/2 sacks in 10 years with Minnesota before playing for Dallas and Detroit last season.

Griffen hadn’t signed as the team concluded practice on Thursday ahead of Saturday’s preseason game against Indianapolis.

On Saturday, Weatherly and Wonnum get another chance to prove themselves.

“It’s a good competition,” Vikings coach Mike Zimmer said. “We don’t have to make that decision yet.”

Zimmer later added: “There’s so many aspects to that. It’s playing the run. It’s rushing the passer. They’re similar guys in some of the things that they can do. So, they both may be out there sometimes. It’s a combination of things, really.”

Weatherly and Wonnum are each 6-foot-5. Weatherly weighs 262 with Wonnum at 258, and they both have experience standing up as pass rushers.

Wonnum has even received some repetitions at linebacker in practices.

“Come out every day and compete,” Wonnum said. “We’re going to get better. Whoever wins it gets the spot, but we compete every day. We’re all like brothers. So at the end of the day, we’re going to push each other.”

Minnesota’s best defenses in recent years have featured pass-rushing threats on both sides.

Weatherly and Wonnum hope to do the same with Hunter back drawing attention.

“That battle is going to go right up to the first regular-season game,” Patterson said. “But the things that they both have to do, they know. That’s something between those two football players and myself.”