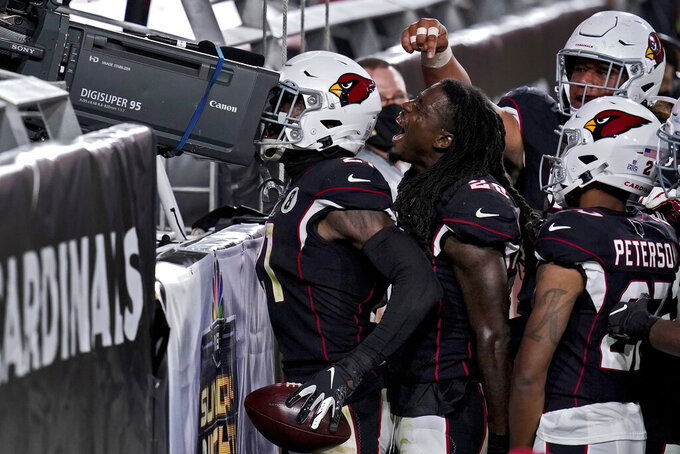 Arizona Cardinals cornerback Patrick Peterson looks into a television camera after making an interception against the Seattle Seahawks during the second half of an NFL football game, Sunday, Oct. 25, 2020, in Glendale, Ariz. (AP Photo/Ross D. Franklin)

GLENDALE, Ariz. (AP) — Quarterback Kyler Murray had a perplexed look on his face after he was informed that Arizona's offense was averaging the most total yards in the NFL.

“Is that real?” he asked a team spokesman.

Yes, Kyler, it's real. It's also real that the Miami Dolphins are giving up the fewest points per game in the NFL. Now the two surprising teams meet in the desert on Sunday while harboring legitimate playoff aspirations as the season nears the halfway point.

The Cardinals (5-2) are averaging nearly 420 yards per game largely thanks to the quick improvement of Murray, who has thrown 13 touchdowns passes and run for seven more scores in a strong half-season. But the 2019 No. 1 overall draft pick said early November is no time to celebrate his team's offensive production despite the winning streak.

“I guess that means we’re doing something good," Murray said. “This being Week 9, we’ve got a lot of work to do.”

The Dolphins (4-3) are on a roll mostly because of great defense. Miami has given up just 11.3 points per game during its three-game winning streak. Now the Dolphins get one of their toughest tests.

“We’ve just got to keep stacking good days, try to keep getting better every week," Miami defensive end Emmanuel Ogbah said. "We’re playing together, we love each other, we want each other to do well.”

Linebacker Markus Golden will be playing his first game with the Cardinals are being acquired from the Giants in a trade last week. It's a homecoming for Golden, who played his first four seasons in Arizona from 2015-18.

“This is the home team," Golden said. "Even when I was away I was rooting for the Cardinals to do good just because in my heart I'll always be a Cardinal. So you're getting everything out of me, I'm coming back and bringing the energy and doing whatever I can do to help this team win.”

Golden was needed after 2019 All-Pro linebacker Chandler Jones was lost for the season because of a biceps injury. Arizona will also be without LB Devon Kennard, put on the reserve/COVID-19 list earlier this week.

Murray and Miami quarterback Tua Tagovailoa will be facing each other for the first time as pros. The two players met once in college: Tagovailoa led Alabama over Murray’s Oklahoma Sooners 45-34 in the College Football Playoff semifinals in 2018. They finished 1-2 in the 2018 Heisman Trophy voting, with Murray getting the award.

This will be Tagovailoa's second career start. He replaced veteran Ryan Fitzpatrick after the team's bye week and helped guide the Dolphins over the Los Angeles Rams 28-17 last weekend.

Arizona running back Chase Edmonds is likely to get most of the carries in the backfield because starter Kenyan Drake is battling an ankle injury. Edmonds is a versatile back who has been valuable in the run and pass game this season. He's averaging 6.1 yards per carry and is fourth on the team with 222 yards receiving.

He had a big role in the Cardinals' 37-34 overtime win over the Seattle Seahawks two weeks ago, finishing with 58 yards rushing on just five carries and seven receptions for 87 yards.

“I’m going to be ready to answer the bell whatever it is, whatever my role is," Edmonds said.

Dolphins quarterbacks coach Robby Brown says Tagovailoa’s relaxed manner makes him easy to work with, such as when the rookie’s first NFL start last week against the Rams got off to a rocky start.

The first time Tagovailoa tried to throw, he fumbled and was then body-slammed to the turf by 305-pound Michael Brockers.

“My initial reaction is, let’s get over to the sideline and let’s sit down,” Brown said. “I never want to overreact. I mean, everyone knows -- my 4-year old could look at it and say, ‘Ooo, that’s not good.’

Tagovailoa threw for only 93 yards but did throw his first career touchdown pass as Miami won.

“That’s just one stepping stone of Mount Everest, and the season is not over, and I can still continue to break that record, and that’s my goal,” Grant said. “I’m going to continue to try to break it each and every game.”

A fifth-year pro, Grant leads the NFL with 227 yards returning punts, one shy of his career high. He played in college at Texas Tech when current Arizona coach Kliff Kingsbury was leading the Red Raiders.

By Teresa M. Walker 7 minutes ago
4 hrs ago
By Greg Beacham 5 hrs ago
6 hrs ago
By Brett Martel 6 hrs ago