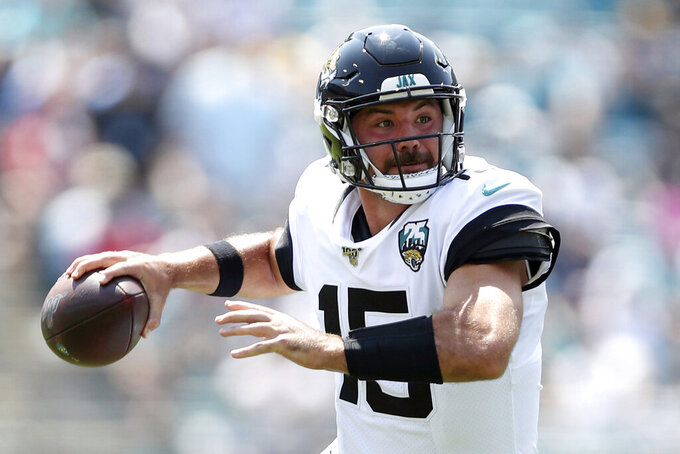 FILE - In this Sunday, Sept. 8, 2019, file photo, Jacksonville Jaguars quarterback Gardner Minshew (15) throws a pass during an NFL football game against the Kansas City Chiefs,, in Jacksonville, Fla. The Jaguars are turning to "The 'Stache." Rookie Gardner Minshew will make his first NFL start at Houston, and the Jaguars have few concerns about his ability to step in for Nick Foles. (AP Photo/Perry Knotts, File)

HOUSTON (AP) — Though Deshaun Watson has been Houston's starting quarterback for a while now, he vividly remembers being thrown into action midgame as a rookie in the team's opener, just as Jacksonville's Gardner Minshew was last week.

Watson came off the bench in Houston's first game in 2017 after Tom Savage struggled and he became the team's starter after that. Minshew, a sixth-round draft pick, was forced to take over for the Jaguars last Sunday when Nick Foles broke his collarbone in the first quarter.

As Houston prepares to meet Jacksonville on Sunday in Minshew's first NFL start, Watson compared has debut in that opener to how things were the following week when he started.

"It's just a different energy coming off the bench to (playing) when everyone has been focused on you," Watson said. "The tape and everyone's been focused on everything that you're good at, what your weaknesses are, throughout the week. They have all days to focus on those things and try to put a game plan around you, and ... it's hard to really explain unless you're in that position. It's a different type of feel."

Minshew looked good last week against Kansas City, completing his first 13 passes and finishing 22 of 25 for 275 yards with two touchdowns and an interception in the 40-26 loss.

Jacksonville coach Doug Marrone was impressed with Minshew's performance and poise in his debut, but knows things will be tougher against a Texans team looking to bounce back from a wild 30-28 loss to New Orleans.

"The challenge is, 'Hey listen, we have to repeat this. Where are we going to go?' There are some people who will question whether he can keep it up," Marron said. "'Do you think he can do that again?' I think that's the challenge, but the one thing I do know about the kid is that he will work his butt off this week, and he will do everything he possibly can, which you appreciate. I think he will have confidence and I think our opponent will be trying to knock the confidence out of him."

Now that he knows starting he's trying to keep the same mindset he's always had.

"Just like any other week," Minshew said. "Trying to be the best I can for the team. The role changes, but the approach doesn't."

Some things to know about the Jaguars-Texans game:

Last week was the first time in 105 career games when three-time Defensive Player of the Year J.J. Watt did not have a tackle or quarterback hit. The defensive end was asked if he was surprised to have zeroes across his stat line for the first time in his illustrious career.

"No," he said. "I've had bad games before and I'll have bad games again. People like to focus on it, and I don't blame them. I understand. But I'm focused on Jacksonville. It's my job to go out there and not do that again, so that's what I'll do."

Watt has had plenty of success against the Jaguars and has 16 career sacks against them, his second most against any team.

Jacksonville failed to sack Kansas City's Patrick Mahomes last week, and then defensive ends Calais Campbell (foot) and Yannick Ngakoue (hamstring) showed up on the injury report. It's not the ideal start for a team built around its defensive front. But the Jaguars have had success against Houston in recent years, making a combined 21 sacks in the last four meetings. Most of those came against Watson.

"He is a very special quarterback, so it's important for us to make him uncomfortable," Campbell said. "That might give us our best chance to stop him. But the Saints got to him six times and still that last drive was incredible, spectacular.

"It's just continuous pursuit," he continued. "You can never be satisfied. If you get there six times, you need to get there seven. He's incredible."

The matchup between Houston receiver DeAndre Hopkins and Jacksonville cornerback Jalen Ramsey has become one of the more entertaining in the league. Ramsey has slowed Hopkins in some of the meetings and limited him to 50 yards in the first matchup last season. But Hopkins got the best of Ramsey in their last game when he caught a career-high 12 passes and finished with 147 yards receiving in a 20-3 win in December.

The Jaguars have had an unusual run of key injuries in season openers.

Running back Chris Ivory, one of the team's top free agents in 2016, was hospitalized before the 2016 opener with a "general medical issue" and missed several games. Receiver Allen Robinson tore knee ligaments in the 2017 opener and missed the rest of the season. Running back Leonard Fournette strained a hamstring in the 2018 opener and was sidelined for six of the next seven games. And now Foles is out indefinitely with a broken collarbone.