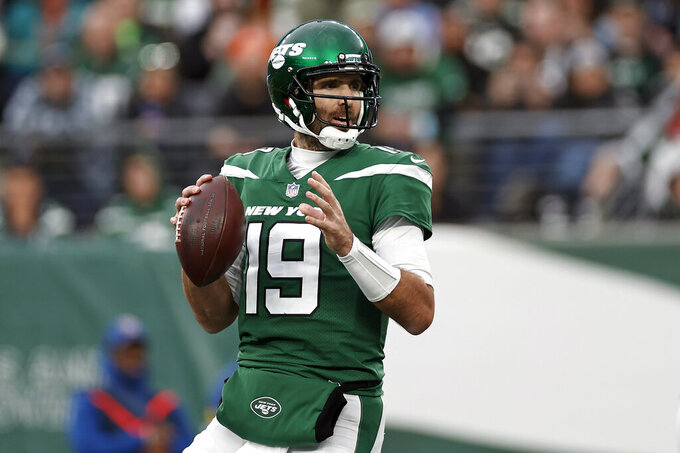 Flacco's agency JL Sports announced the deal on Twitter shortly before the official start of the NFL's new league year.

A person familiar with the deal also says the Jets tendered backup quarterback Mike White, a restricted free agent, at his original-round level — fifth — of $2.54 million. The person spoke to The Associated Press on condition of anonymity because the team had not yet announced the deal.

The Jets also tendered a one-year contract worth $2.43 million to kicker Eddy Pineiro, a restricted free agent, according to agent Drew Rosenhaus. New York also has the right of first refusal and can match any offer if he receives one from another team.

Oft-injured linebacker Blake Cashman was traded to Houston for a 2023 sixth-round draft pick, according to a person familiar with the deal. The 2019 fifth-round pick was mainly a backup on defense and a standout on special teams, but struggled with several injuries in his three seasons — finishing each one on injured reserve.

The 37-year-old Flacco began last season with Philadelphia after spending 2020 with New York, but was re-acquired by the Jets for a conditional sixth-round draft pick when Wilson injured a knee. Flacco ended up playing in two games last season, including one start during which he threw for 291 yards and two touchdowns in a 24-17 loss to Miami in Week 11.

Flacco provides the Jets with an experienced veteran backup for Wilson, something they didn't have entering last season. The 2013 Super Bowl MVP with Baltimore has passed for 41,269 yards and 227 touchdowns with 144 interceptions in 14 NFL seasons. Flacco spent his first 11 years with the Ravens, and played one season in Denver before his first stint with New York in 2020.

White made headlines when he stepped in for the injured Wilson in Week 8 and threw for 405 yards and three touchdowns in his first NFL start, a comeback victory over Cincinnati. White also caught a 2-point conversion pass on the go-ahead score, and had his jersey and a game-used ball sent to the Pro Football Hall of Fame in Canton, Ohio, after his 37 completions set an NFL record for the most in a player's first start.

White finished with three starts and passed for 953 yards and five TDs with eight interceptions.

The addition of the 26-year-old Conklin continues an overhaul at the tight end spot after the Jets earlier this week agreed to terms with former Bengals standout C.J. Uzomah. Conklin, a fifth-round pick in 2018, caught a career-high 61 passes for 593 yards and three TDs after taking over as the Vikings' starter after Irv Smith Jr. was lost for the season with a knee injury.

The Jets got only 50 catches for 534 yards and three TDs from their tight ends last season. Ryan Griffin, who led the team with 27 receptions, could be a candidate to be cut. Tyler Kroft, who had 16 catches, is a free agent and unlikely to be re-signed. Trevon Wesco and Kenny Yeboah remain on the roster, as do Brandon Dillon and Lawrence Cager, a converted wide receiver.

Shepherd was a third-round draft pick in 2018 and remains the second-longest tenured player on the Jets' roster behind only long snapper Thomas Hennessy. Shepherd has 4 1/2 career sacks in 56 games and gives New York depth on the D-line after it lost Folorunso Fatukasi to Jacksonville this week.

Feeney, a backup who can play guard and center, is back with the Jets for a second season after spending his first four with the Chargers.

Pineiro was a stabilizing force for New York at kicker late last season, going 8 for 8 on field goal attempts and 9 of 10 on extra points after being signed by the Jets in December.

The Jets have been busy at the start of free agency, re-signing All-Pro kick returner Braxton Berrios, running back Tevin Coleman and safety Lamarcus Joyner, among others. In addition to Uzomah, they have also agreed to terms with guard Laken Tomlinson, cornerback D.J. Reed and safety Jordan Whitehead.