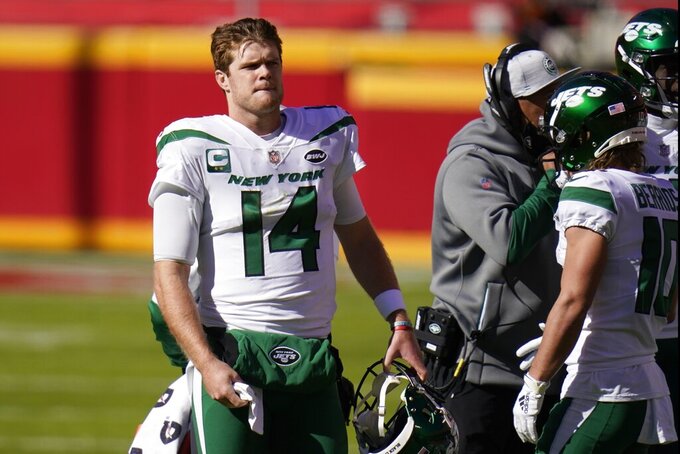 New York Jets quarterback Sam Darnold (14) stands on the sideline in the first half of an NFL football game against the Kansas City Chiefs on Sunday, Nov. 1, 2020, in Kansas City, Mo. (AP Photo/Jeff Roberson)

“We'll see where he's at after today,” Gase said during a video call. “I think he's going to be able to practice tomorrow, unless something changes.”

Darnold missed two games last month after spraining the AC joint in his right shoulder against Denver on Oct. 1. He took a hard hit at Kansas City last Sunday and appeared to grimace, but remained in the game after being checked out on the sideline.

Gase said an MRI earlier in the week showed no additional damage to Darnold's shoulder and the injury isn't structural. He added that the team will see how the quarterback feels after he does practice and expects Darnold to be under center unless "something doesn't feel right" in his shoulder.

Darnold will have had four days off before he attempts to practice again. While that might not seem ideal, Gase feels “pretty good” about Darnold's chances of playing.

“I think it's going to take a lot for him to stay out of this game,” Gase said.

Williams has been a bright spot for the Jets this season, but didn't finish the game against the Chiefs. Gase said he'll be evaluated over the next few days and is a “wait-and-see” for the game. Williams leads the team with three sacks and is the only defensive lineman in the league to have three or more tackles in every game this season.

Crowder has been sidelined the past two games, but Gase thinks he's “moving closer” to rejoining his teammates and practicing — perhaps on Friday. Despite missing four games this season, Crowder leads the Jets with 29 receptions and 383 yards receiving, and is tied with Braxton Berrios with two TD catches.

Fellow receiver Breshad Perriman remains in the concussion protocol, but Gase said he is in the next phase of his recovery and participated at practice on a limited basis Thursday. Perriman missed the game last Sunday after taking a hard hit against Buffalo two weeks ago.

Kicker Sam Ficken was also limited as he recovers from a right groin injury that has sidelined him the past two games. Sergio Castillo is 4 of 5 on field-goal attempts in Ficken's absence, with his only miss a block last week.

NOTES: Gase said coordinator Dowell Loggains will remain the play-caller on offense for the third straight game. ... Rookie LT Mekhi Becton has become a bit of a sensation this season with his pancake blocks in games getting lots of buzz on social media. He lifted Chiefs defensive end Frank Clark off his feet on one play last Sunday, and added several other blocks to his growing list of highlights. “It’s unusual,” Gase said. "I mean, this is a grown-man league now. I don’t know if I’ve ever seen that happen to Frank Clark before.”