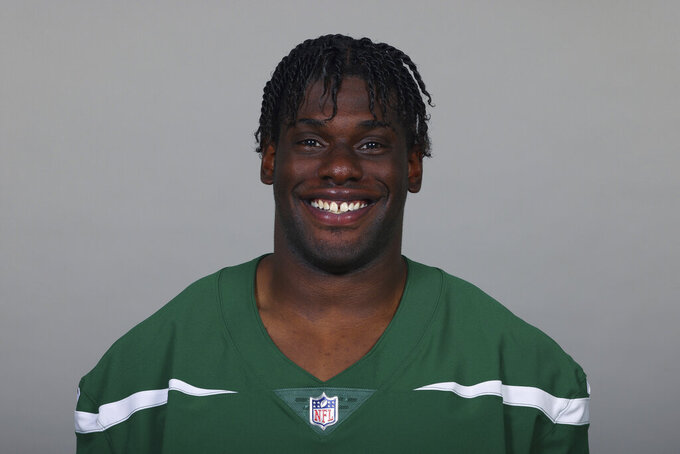 FILE - This is a 2021 file photo of Carl Lawson of the New York Jets NFL football team. Jets star defensive end Carl Lawson was carted off the field Thursday, Aug. 19, 2021, with an apparent leg injury during the team's joint practice with the Green Pay Packers. (AP Photo/File)

Both players were carted off the field during Thursday's joint practice session with the Green Bay Packers.

The Jets announced later in the day that Lawson had ruptured his Achilles tendon while Lewis had torn his patella tendon and sprained his medial collateral ligament.

The loss of Lawson will force the Jets to retool their defensive line under Saleh, who spent the past four seasons as the San Francisco 49ers' defensive coordinator.

While the news on Lawson is a tough blow to the Jets’ defense, Saleh is no stranger to dealing with injuries and still being able to thrive. The 49ers ranked No. 5 in total yards allowed last season despite the losses of Nick Bosa, Solomon Thomas, Dee Ford, Richard Sherman and Ezekiel Ansah because of injuries.

Bryce Huff, an undrafted free agent last year out of Memphis, is the favorite to get an opportunity to replace Lawson as a primary pass rusher for the Jets.

Lawson signed a three-year, $45 million contract with the Jets in March after totaling 20 sacks over his first four NFL seasons in Cincinnati. He was having an outstanding training camp, undoubtedly among the Jets’ top performers this summer.

His injury occurred during the Jets' red-zone drills period while facing the Packers' offense. Lawson fell while rushing the passer and stayed down as trainers immediately raced to the defensive end.

The music playing over the speakers at practice was turned down as concerned teammates gathered around Lawson. He hopped up after a few minutes and was taken from the field on a cart.

The 23-year-old Lewis was entering his second season with the Jets and was making the switch from cornerback, the position he has played most of his career, to safety. He was having a solid transition with a good camp, intercepting three passes in team drills during camp.

Lewis played at the Air Force Academy and was the first Air Force senior to apply for — and receive — deferred service time. He went undrafted last year, but signed with Arizona and spent last summer with the Cardinals before getting cut late in camp. The Jets claimed him the next day.

He was among the Jets’ final cuts last year, but was signed to the practice squad, where he spent the season.

Lawson and Lewis weren't the only Jets to get injured Thursday. Defensive lineman Sheldon Rankins hurt his knee and wide receiver Denzel Mims injured his hip.

The Jets said Rankin and Mims were both day to day with minor injuries.

This marked the second straight day that the Jets and Packers had joint practice sessions in advance of their exhibition game Saturday at Lambeau Field.