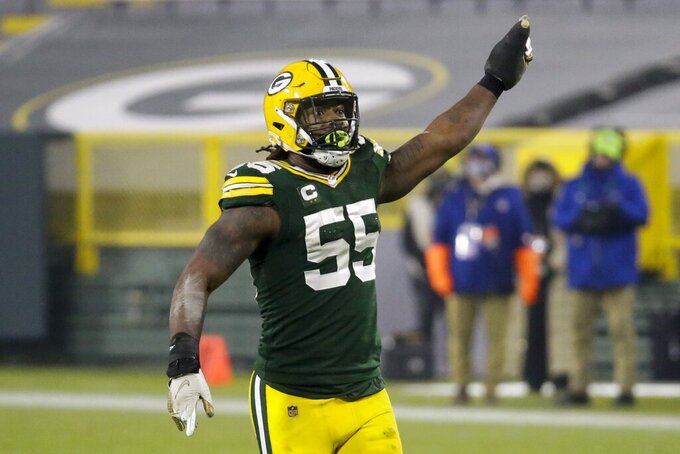 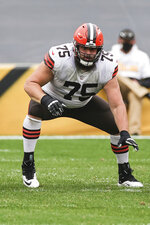 The New York Jets made a $1 million donation to four organizations as part of the team’s social justice, inclusion and diversity efforts.

All Stars Project, Innocence Project, New York Urban League, and Year Up , which have the the goal of reducing barriers and creating opportunities for individuals in need, each will get $250,000.

Jets players, coaches, and staff will volunteer time and expertise on various upcoming projects with each organization.

“We wanted to contribute to these organizations and help push our community forward,” says Jets President Hymie Elhai. "It is our hope through these partnerships that we can positively affect the access, equity and rights of those in need.”

Browns Pro Bowl guard Joel Bitonio grew out his beard during the pandemic. He doesn’t have the belly, but the facial hair helped him look more like Santa Claus.

Bitonio and his family gave needy local children a holiday lift by providing gift cards for them to use to buy presents for themselves and others. He also teamed with Meijer in giving gaming systems to Cleveland Neighborhood Resource and Recreation Centers.

In recent years, Bitonio and his wife, Courtney, have done the Christmas giveaway in person at a store, but were forced to do it virtually in 2020. That didn’t soften the impact of his generosity or message.

“While Courtney and I will definitely miss shopping with the kids, it was important to us to still find a way to bring a smile to their faces and create great memories for them this year,” says Bitonio, who has a young daughter, Zoey.

Bitonio was voted to his third consecutive Pro Bowl this week. He’s the first Cleveland guard to do that since Hall of Famer Gene Hickerson was elected six straight times from 1966-71.

“He overhead me talking about it and I told him, I was like, ‘I really want this car,’ “ Preston Smith says. “And I guess he wanted to surprise me with it.”

Za’Darius Smith noted that Preston bought scooters for the entire Packers defense as a Christmas present last year. Za’Darius figured he ought to return the favor. Za’Darius added that he knows a couple of guys who own car dealerships, which enabled him to get a good rate.

“I’m not looking for nothing in return,” Za’Darius Smith said. “Preston does great things for us and this team.”

Chargers owner Dean Spanos gave employees on the business and community sides a COVID-19 hardship allowance in their paychecks last week. The amount for each of the 110 employees varied depending on how many years a person has been with the club.

Spanos’ gesture comes at a time when some franchises throughout professional sports have resorted to furloughs or layoffs due to the loss of revenue during the coronavirus pandemic. It also comes as many NFL franchises are assessing their business plans for 2021.

The Chargers last week announced an expanded partnership with the Liberty Hill Foundation, a national leader in social justice, that included a $100,000 donation.

Browns rookie left tackle Jedrick Wills has made a huge impact in his first season — on and off the field.

The first-round draft pick, who has made a seamless transition after playing right tackle at Alabama, donated more than $50,000 to six needy Cleveland families this week. Wills teamed with the Urban League of Greater Cleveland to help him find people to help.

And so began Jedrick’s Winter Blast, an annual event Wills hopes to grow.

This year, he bought a new car for a woman who had been living in a homeless shelter and needed transportation to get to her new job. He surprised her with an unveiling in a parking lot.

Wills also is paying a year’s rent for a family of five which recently lost their home in a fire. He bought Christmas gifts and kicked in another $10,000 to help them get back on their feet.

“He gets it,” Browns wide receiver Jarvis Landry said of his young teammate. “That is part of him understanding that he is more than just a football player and understanding his role in the community. He gets it and I love that about him.”

The Arizona Cardinals have partnered with State Farm to provide 8,000 meals to 500 families from Mesquite High School for the holiday season.

The meals, prepared by Craft Culinary Concepts at State Farm Stadium, will be picked up by the preselected families at a contactless drive-thru at the school on Monday. Each of the 500 families identified by the school will receive four home-cooked meals, bread and a gallon of milk.

“This year has hit so many hard-working families, leaving them feeling lost and alone and unsure of how to make ends meet," says Rod Huston, principal of Mesquite High School. " Mesquite understands the value of being good neighbors and building relationships with our community and its families. Allowing us to help these students start 2021 in a positive fashion will go a long way in helping them have a great second semester.”