Jets' Mosley 'cleared for everything' after core injury 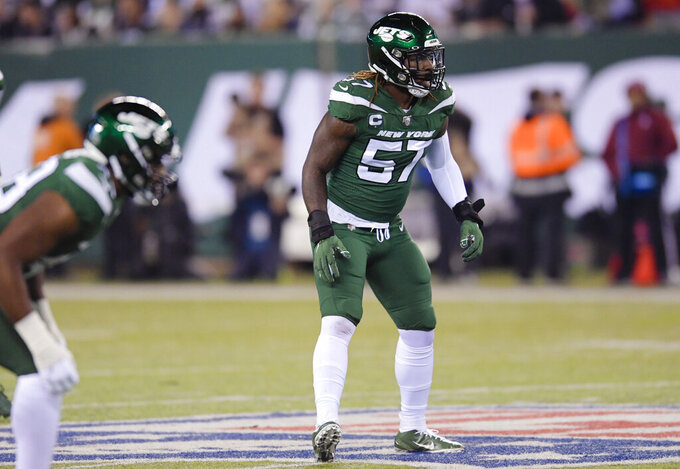 FILE - In this Oct. 21, 2019, file photo, New York Jets inside linebacker C.J. Mosley gets ready for a play by the New England Patriots during the first half of an NFL football in East Rutherford, N.J. Mosley is feeling healthy and ready to be a force again in the middle of the Jets' defense. The star middle linebacker missed almost all of last year in his first season with his new team because of a groin/core muscle injury. But, Mosley has been given a good report from the doctors, and expects to have no limitations during training camp. (AP Photo/Bill Kostroun, File)

NEW YORK (AP) — C.J. Mosley is finally healthy and ready to be a force again in the middle of the New York Jets' defense.

The star middle linebacker missed almost all of last year in his first season with his new team because of a groin/core muscle injury. But Mosley has been given a good report from the doctors and expects to have no limitations during training camp.

"I'm cleared to do everything,” Mosley said Wednesday during a video conference call. “I've been working with my trainers every week, as far as workouts and rehab. Once we get back in the building, whenever that is, we’ll go from there.”

Mosley was one of the Jets' biggest additions last offseason, signing a five-year, $85 million deal after five terrific seasons in Baltimore.

The linebacker, who turns 28 next week, made a huge impact in his regular-season debut with the Jets. He had five tackles, recovered a fumble and returned an interception for a touchdown against Buffalo, but hurt his groin late in the third quarter while knocking away a pass.

Mosley returned six weeks later for a Monday night matchup against New England, but was still bothered by the injury. Mosley ended up missing the rest of the season. He tried to avoid surgery before ending up doing so in December.

He has done much of his rehabilitation and workouts in his basement at home in New Jersey for the last few months during the coronavirus pandemic.

Mosley said he's now able to plant his feet and cut without pain or limitations, as he could before the injury.

"That won’t stop me during the season from getting back on the field,” he said. “Once I got that out of the way, now I’m pretty confident I’ll be good to go.”

Mosley said would often arrive to the facility last season at 6 a.m. and leave after 6 p.m. — rarely seeing the sunlight as he tried to get healthy.

“Just don’t take anything for granted,” Mosley said he learned during the rehab process. “You really realize how much the game means to you when you’re away for so long. ... You definitely get a little isolated when you’re just in the facility and training room working out and just trying to do everything to stay sane.”

NOTES: Mosley said the team had a video meeting last week, and Jets chairman and CEO Christopher Johnson addressed the players in light of George Floyd's death and the protests that have happened around the country. “He expressed his concerns and pretty much let us know anything we needed, he was there to help,” Mosley said, adding that Johnson gave every player his personal cell phone number. “That meant a lot to me and I’m pretty sure to everybody else.” ... Mosley was uncertain whether he would take a knee during the national anthem before games, as he and many other NFL players did a few years ago to protest racial injustice. Mosley acknowledged that the entire team — including Johnson and coach Adam Gase — would need to discuss that before the season. “Some guys will definitely want to kneel, and some guys won’t," Mosley said. "I hope the NFL and the owners can look back at that situation and make sure we all handle it the right way. I would think the NFL and owners and coaches will have our back 100%, full support. We have to have that conversation to see where everybody’s mindset is.”