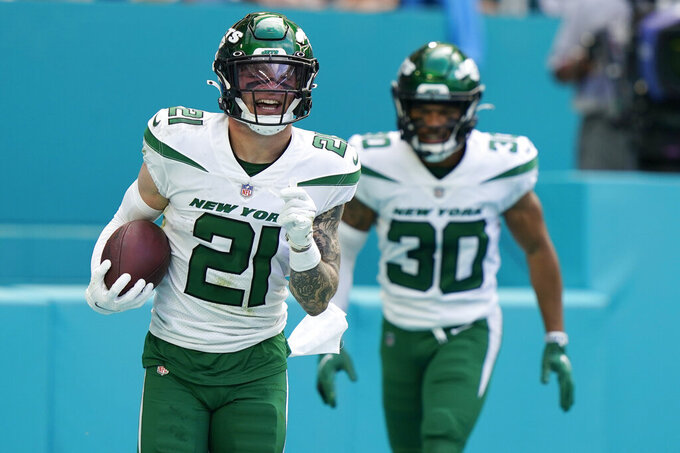 It’s now official: New York will end the season alone at the bottom of the AFC East. The Jets were locked into that spot Sunday, their 31-24 loss to Miami sending them to 3-11 on the season and four games behind the Dolphins in the standings with only three contests remaining.

This will be the fifth time in the last six seasons that the Jets finish last in their division. The only other team on such a dismal pace is Jacksonville, which lost to Houston on Sunday to fall to 2-12 and into last place in the AFC South, now well on its way to a fifth last-place finish in that six-year span.

“I thought we had some good opportunities there for plays," Jets quarterback Zach Wilson said.

They did, just not enough. The Jets' last offensive play of the game was a microcosm of the season: They needed 10 yards to keep the drive alive, and got 9. A couple kneel-downs by Miami later, it was over.

It can’t be a surprise that the latest rebuilding project for the Jets wasn’t a speedy mission for first-year coach Robert Saleh. Turnarounds take time, especially in the NFL.

“The underlying message is that this is December football," Saleh said. “You had a Dolphins team trying to stay in the playoff hunt. We got everything they had. We gave them everything we had and I promise you, they gave it right back."

Saleh’s is the fourth regime the Jets have tried during their current playoff drought, which is now up to 11 seasons and counting. Rex Ryan and the Jets were last in the AFC East in 2014, his final season with the club. Todd Bowles couldn’t steer the Jets higher than a last-place finish in three of his four seasons. Adam Gase was there for two years; he finished third in Year 1, fourth last season.

And now, it’s certain that Year 1 of the Saleh era will end up as more of the same, at least in terms of finish. That said, Dolphins coach Brian Flores speaks highly of Saleh and the job he’s doing.

The Jets are 26-68 since the start of the 2016 season. That’s the worst record in the NFL over that span, and the worst six-year run in Jets history.

But Saleh points to the three remaining games — in order, against Jacksonville, Tampa Bay and then Buffalo — as teaching tools for both now and beyond.

“Winning games in December is a grind," Saleh said. “It's a back-and-forth battle and it comes down to the fourth quarter and it comes down to a few plays that make or break you. I'm proud of the guys for the resilience and the fight and there's going to be a lot of things we can learn off of this game. We've got three games left of December football to learn how to win these games.

"Because I promise, we're going to be in these positions."