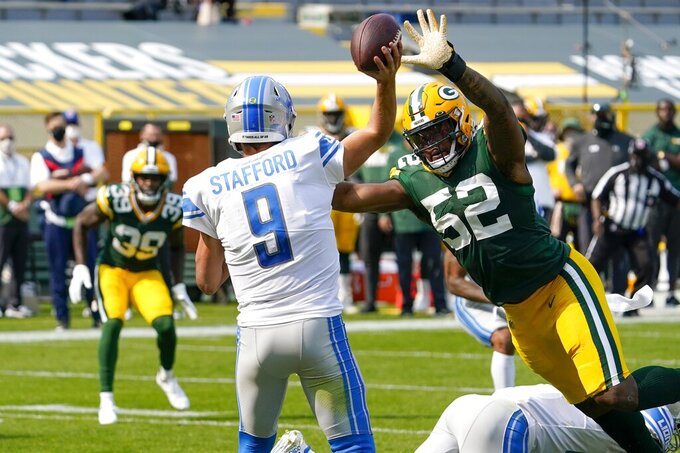 GREEN BAY, Wis. (AP) — Aaron Jones wanted to do a Lambeau Leap even without fans in the stands.

He gave himself plenty of opportunities.

Jones rushed for a career-high 168 yards and scored three touchdowns, including a 75-yard breakaway, as the Green Bay Packers rallied from an early 11-point deficit to beat the Detroit Lions 42-21 on Sunday.

After his first touchdown of the day, a 7-yard reception from Aaron Rodgers, Jones did a different kind of Lambeau Leap. He jumped atop a green tarpaulin that covered the first several rows of the stands; the pandemic didn’t allow for any spectators. Most of the tarps had advertisements on them.

“I definitely miss the fans, the pats on the helmet, the pats on the back, them screaming,” Jones said. “But I mean, anytime I get in the end zone. I like the Lambeau Leap. It’s a tradition we have here. Hopefully, I picked up some sponsors.”

Jones also had a team-high 68 yards receiving on four catches as the Packers (2-0) won their home opener for an eighth consecutive year and improved to 8-0 against NFC North foes during coach Matt LaFleur's tenure. Jones had a 14-yard touchdown run to go along with his 75-yarder.

Rodgers was 18 of 30 for 240 yards with touchdown passes to Jones and Robert Tonyan.

“Today’s a game we expect to win,” Rodgers said. “No, we don’t have the home crowd, but we’ve had such an advantage at home over the years. We were 7-1 (at home) last year, we’ve obviously been good in the division last couple years, haven’t lost, but these are the type of games you have to win.”

The Lions are the first team in NFL history to blow double-digit leads to lose four straight games, according to the Elias Sports Bureau. They've lost 11 straight overall for their longest skid since dropping 19 from 2007-09.

After winning 43-34 at Minnesota last week, the Packers are the eighth team in the Super Bowl era to score at least 40 points in each of their first two games. The last two teams to accomplish that feat — New Orleans in 2009 and Denver on 2013 — went on to reach the Super Bowl.

Green Bay took the lead for good 17-14 on Rodgers’ 11-yard pass to Tonyan with 14 seconds left in the second quarter. Jones then raced through a hole on the right side and scored on the Packers’ first play from scrimmage in the second half.

The Packers extended the lead to 31-14 later in the third quarter when Rashan Gary pressured Matthew Stafford into throwing an interception that Chandon Sullivan returned for a 7-yard touchdown.

“I’ve got to find a way to make sure that we’re not giving up points there," said Stafford, who went 20 of 33 for 244 yards with two touchdowns. “If I have to throw an incomplete that looks horrible or find a way to get around and just get the ball out, I’ve got to do that.”

At that point, Green Bay had given up touchdown drives on five straight series – the last three possessions at Minnesota and the first two series of this game. But the Packers' defense stiffened the rest of the way.

“Obviously you never want to start that way, but the guys didn’t blink,” LaFleur said. “They didn’t flinch. They stuck together.”

After the Lions scored on the game's opening possession, Johnson did his own version of a Lambeau Leap as he leaned into a tarp and gave out high-fives to the air after scoring on a 1-yard run for Detroit.

Packers: travel to New Orleans for a Sunday night game.