Julio Jones cleared to practice as Titans return from bye 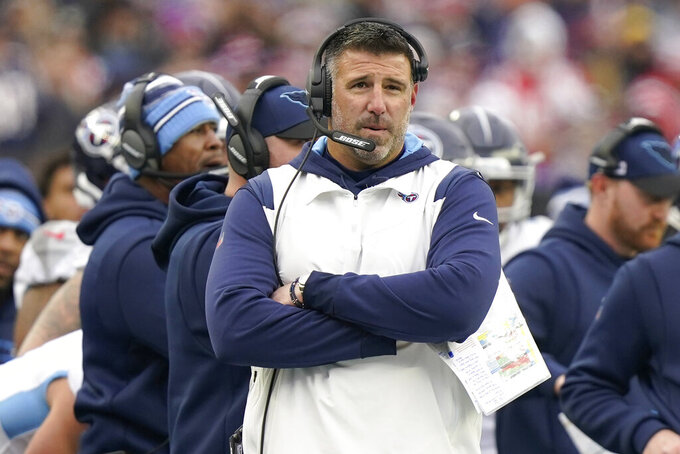 NASHVILLE, Tenn. (AP) — Proof the Tennessee Titans are healthier now than before their bye came in a roster announcement Monday. Seven-time Pro Bowl wide receiver Julio Jones and two others can start practicing with the team, a big step toward rejoining the active roster.

The Titans also designated rookie wide receiver Racey McMath and safety Dane Cruikshank to return to practice. Getting this trio back could be a big boost for the Titans (8-4), who currently sit atop the AFC South and returned to work Monday up a spot to No. 2 in the AFC with five games remaining.

“Those guys have been working extremely hard to get back, which is what we ask everybody that isn’t participating,” coach Mike Vrabel said. “And, I felt like the training staff, the weight staff, everybody involved, those particular players worked extremely hard. I think it’s beneficial.”

Vrabel said the Titans use technology to help track players and how fast they're able to run to gauge when someone is ready to start practicing again. Vrabel said it's helpful to both the team and the players involved to see exactly how fast they ran during games before being injured.

“We can track that and monitor that and show them as they get closer,” Vrabel said. "So that, one, we’re all on the same page and they, two, have a lot of confidence to come back.”

Getting Jones back would be a big boost for an offense that went into the bye scoring just 13 points apiece in a two-game skid. A hamstring issue has limited Jones, 32, to six games this season. But Jones has 21 catches for 336 yards and would be a big boost with 2020 Pro Bowl receiver A.J. Brown also on injured reserve.

The Titans played only four receivers in their last game before the bye, a 36-13 loss to the Patriots. Nick Westbrooke-Ikhine, Chester Rogers, rookie Dez Fitzpatrick and Cody Hollister combined for six catches on 14 passes.

Derrick Henry, the 2020 NFL Offensive Player of the Year, is the biggest name on the Titans' injured reserve list, currently at 18. Henry was put on injured reserve Nov. 1 and has missed the past four games with a broken right foot.

Vrabel had to push some meetings and Monday's schedule back with a testing backlog as the Titans returned to work after the four-day break for the bye. With the Titans rested, Vrabel also is hoping to practice at a faster pace after many sessions held at walk-through or jog-through pace over recent weeks.

“It’s going to be real, real critical that we focus on our fundamentals, our conditioning, practicing with some speed as we head in here to December," Vrabel said. “All those things that make a difference in football games.”

One area that could show a dramatic improvement from practicing faster could be turnovers. The Titans lost nine combined in the two-game slide and now have 21 for the season, a big increase from having 12 giveaways all of the 2020 season.

For now, the Titans are focused on hosting Jacksonville (2-10) on Sunday and snapping that skid. Tennessee gained a spot during its bye, going from the No. 3 position in the AFC to No. 2. Vrabel said he's more focused on his own team and not what other teams are doing right now.

“This is a focus on fundamentals," Vrabel said. "Let’s focus on conditioning, not letting our conditioning be a factor down the stretch here now that it’s December, focusing on trying to eliminate bad football. That would be a a huge key in our success here down the stretch.”