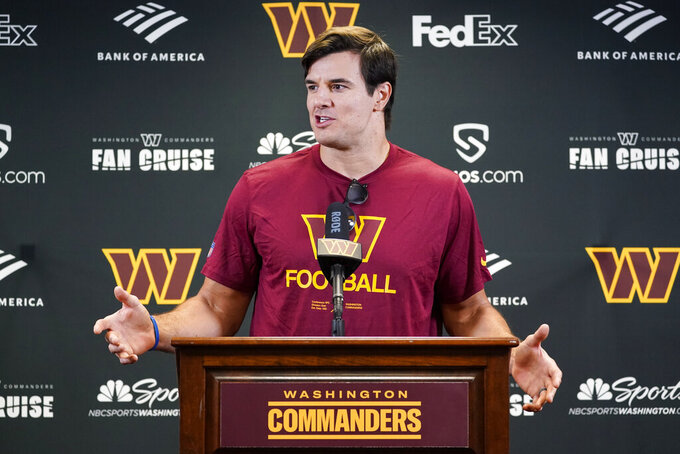 ASHBURN, Va. (AP) — Ryan Kerrigan still called Washington’s facility by its old name, even though he was wearing a shirt bearing the new logo of the franchise’s rebranding as the Commanders.

That wasn’t the only reminder of the old days that weren’t that long ago.

Seeing his old teammate at Commanders training camp brought punter Tress Way, the organization’s longest-tenured player, back to the days of Kerrigan flexing after making a sack back when Washington was known as the Redskins. Kerrigan was the final standout player under the old name, and his retirement back in the familiar burgundy and gold colors marks the end of that chapter for a franchise trying to recapture long-lost glory.

“It’s a new era of football here in Washington, and I’m hoping that means a lot of wins in the future, some playoff wins — something that I unfortunately didn’t get to experience here,” Kerrigan said at his retirement news conference Saturday. “I’m just hoping that means good things for the team moving forward and a good thing for the guys in the locker room.”

That locker room has changed significantly since the final game Kerrigan and his teammates played with the old name on Dec. 29, 2019. Just 11 of 91 players in camp played when Washington was the Redskins, a product of Ron Rivera’s roster overhaul since taking over as coach and head of football operations on New Year’s Day 2020.

Kerrigan, who played one season for Rivera with what was called the Washington Football Team the past two years, is a link to the organization’s past as much as anything else.

“Obviously, Ryan spent most of his time here under the old name, but us honoring him as the Commanders I think just continues on the legacy of that name and our team as a whole and just shows that we are still the same group of guys, whether the name has changed or not,” said center Chase Roullier, one of those to have played under all three names in Washington. “There’s a lot of cultural changes, a lot of things that have changed, but we’re still able to honor Ryan as such an important part of this franchise and what he has done for us.”

Kerrigan is Washington’s career sacks leader, though his departure for one final season with Philadelphia also gave way to pass-rushers Montez Sweat and Chase Young. Together they were part of the defense two seasons ago that ranked second in the NFL on the way to winning the NFC East and making the playoffs.

Several key pieces have changed since then, including Carson Wentz at quarterback, and Kerrigan’s message to the team was optimistic about its direction.

“What’s really cool is Kerrigan comes out for one day and he’s talking about what he sees just with us and in the locker room, in the building, on the field, and he said the word ‘momentum,’” Way said. “I’m pretty biased because he’s one of my best friends, but I would argue the same thing. You just feel a certain momentum, so it’s just a matter of whether we can execute and win some games and keep that going.”

That’s what Rivera has been tasked to do since being named coach prior to the pandemic and the summer of 2020, when a national reckoning on racism in the U.S. prompted the team to drop the old name amid pressure from sponsors and after decades of criticism from Native American groups.

For what it’s worth, Kerrigan is a fan of the new name. He’s also proud to be known as one of the final great Redskins players.