Kevin Johnson gets warm welcome in fresh start with Bills 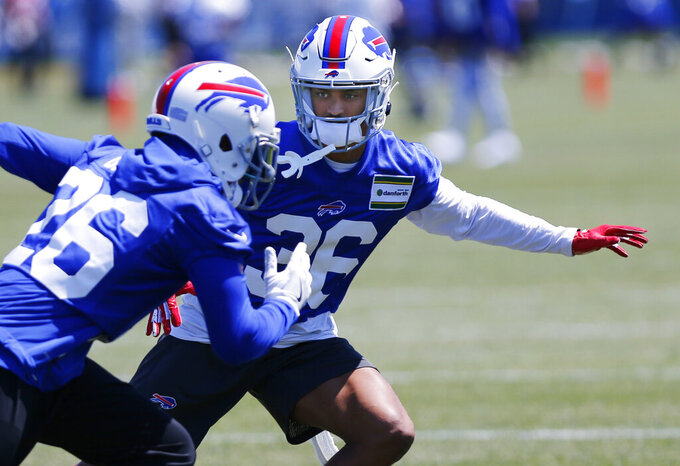 ORCHARD PARK, N.Y. (AP) — Cornerback Kevin Johnson required little introduction upon signing with the Buffalo Bills this spring while attempting to put behind his injury-troubled past with Houston Texans.

Johnson was already familiar with Bills defensive backs coach John Butler, who held the same role during Johnson's first three seasons in Houston. And then there was the surprising warm welcome the 2015 first-round draft pick received from Bills starter Tre'Davious White.

"I was like, 'Man, I'm happy you're here because you remind me so much of myself,'" White said, recalling the first conversation he had shortly after Johnson signed a one-year deal with Buffalo in March. "I was like, 'That's what I need. I need somebody that's going to push me in practice.'"

Though the two never played together or knew each other for that matter, White became a big fan after Johnson was selected by Houston with the 16th pick out of Wake Forest. White, then entering his junior season at LSU, was such a student of football he would study each of the top cornerback selections to see how he compared and what he needed to work on to improve his own game.

What stood out about Johnson was his remarkable footwork.

"His footwork is crazy. He has elite quickness, elite change of the direction," White said. "It's just unfortunate the injury stuff that he can't control has shorted him up to this point and time. But when he's on the field and he's healthy, he's a great, great corner. He's going to be good for us."

The sentiment is shared by Johnson, who is competing for the starting job opposite White, and attempting to kick-start a career after a series of injuries limited him to playing a combined 19 games in his past three seasons following a promising rookie year.

"It's frustrating, but through all that I feel like I'm battle tested because of it," Johnson said, referring to his past.

"I don't necessarily say I feel I have to prove anything. But for me, I want to finish what I started," he added. "And that's just something that motivates me."

Johnson's versatility stood out during his first season with Houston, for whom he had 11 starts in 17 games — including one in the playoffs — while splitting time at all four secondary positions.

The troubles began when he missed the final 10 games of the 2016 season after breaking his foot in a 26-23 overtime win against Indianapolis. Johnson was credited with 10 tackles and a pass defended in that game while missing just one snap playing through the injury — while knowing it would likely be his final game of the season.

The following year, Johnson missed four games with a sprained knee. And then came last year, with his season ending during the Texans' opener when he sustained his second concussion in a month's span.

Houston elected to release Johnson rather than pick up the fifth-year contract option, valued at $9 million.

The 26-year-old Johnson met with several teams before signing a one-year contract with Buffalo.

Reuniting with assistant coach Butler played a factor, as did the chance to play in a defense that favors defensive backs, and finished allowing the second-fewest yards in the NFL last season. Getting recruited by White didn't hurt, either.

"That was awesome. This is a respect thing," Johnson said of having a fan in White. "I've got the same mutual respect for Tre' and his ability to play the game."

Johnson has shown glimpses of his ability during spring practices, in which he had three interceptions before the Bills opened their three-day mandatory minicamp Tuesday. Butler said he sees the same physical abilities the 6-foot Johnson displayed during his first three seasons in Houston. The only question is whether he can stay healthy.

Johnson said he's not once felt sorry for himself over what's happened.

"I believe in myself," Johnson said. "I don't think I ever shook my head. I just embraced it all. And I think that's what makes me me now."

NOTES: C Mitch Morse has begun practicing after having surgery to repair a groin injury shortly after signing with the Bills. ... WR Cole Beasley practiced on a limited basis after having a similar operation as Morse. ... WR Robert Foster was held out of practice after hurting his foot last week.