Lions defense a work in progress, has nowhere to go but up 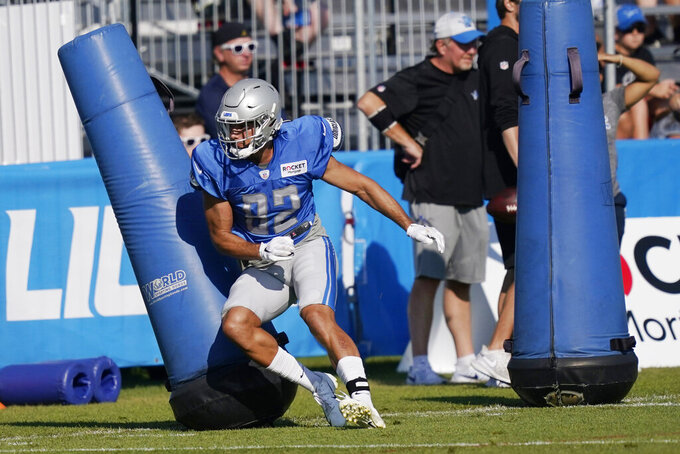 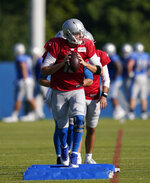 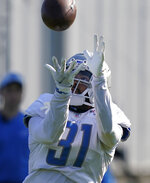 ALLEN PARK, Mich. (AP) — Defensively, the Detroit Lions have nowhere to go but up as head coach Dan Campbell prepares for his first season.

Last year's squad finished last in the NFL in both points (519) and yards (6,716) allowed, the worst marks in the franchise’s 91-year history.

The transformation is underway.

Campbell, who took over in January, tabbed former New Orleans Saints defensive backs coach Aaron Glenn to be the team’s new defensive coordinator. A former Pro Bowl cornerback, Glenn helped turn around the Saints from the 32nd-ranked scoring defense in 2015 to a top-10 unit in both 2017 and 2020. The Lions haven’t had a top-10 scoring defense since 2014.

Glenn is tasked with developing the Lions’ young secondary. Cornerback Jeff Okudah, the team’s third overall pick in the 2020 NFL draft, stands to benefit the most. Okudah struggled in his rookie season, battling through a groin injury and early rookie hiccups, but Glenn already sees a complete transformation.

“You see the confidence, you see the understanding, and, more importantly, you see the camaraderie with his teammates,” Glenn said. “That’s what I’m looking for with Jeff.”

The Lions have seen similar progress in third-year cornerback Amani Oruwariye and fourth-year safety Tracy Walker. Both players have raved about the difference Glenn and new defensive backs coach Aubrey Pleasant have made in their development this offseason.

“I think from the top down, through the whole secondary, coach Glenn, coach Pleasant, has just put so much confidence in guys,” Oruwariye said.

The Lions also plugged a lot of resources into their defensive front in the hope of bolstering a unit that produced just 24 sacks last season, fewer than all but five teams. They traded for veteran defensive tackle Michael Brockers, then drafted defensive tackles Levi Onwuzurike and Alim McNeill with picks in the second and third rounds, respectively. McNeill is already turning heads in training camp.

“I tell you what, man, he’s unbelievable,” Glenn said. “Strong, agile, everything that we expected when we got him.”

The Lions return two of their more successful defenders on the edges — Trey Flowers and Romeo Okwara. Flowers, who won two Super Bowls as a key component of the New England Patriots’ defense, is hoping to bounce back after missing nine games due to injuries in 2020. Okwara is coming off his most successful season, which produced 10 sacks.

However, with the Lions defense transitioning to a 3-4 defense this year, both Okwara and Flowers will move from defensive end to outside linebacker in Detroit’s base formation. That move comes with its challenges, but the Lions have been impressed with how the two have adapted thus far.

“The transition has not been a big deal for him,” Glenn said of Okwara. “ Really, for none of these guys. Is it new? Absolutely. But as far as making the transition, man, these guys are ready to roll.”

As for using last year’s struggles as motivation to turn things around in 2021, it depends on whom you ask. Okwara, who was a part of that historically bad unit, hasn’t forgotten.

“We definitely have a chip on our shoulder just looking at all the different categories. I think we were 32 in a lot of ’em, which is definitely embarrassing for us,” Okwara said. “Just taking that as fuel for training camp.”

Glenn, on the other hand, is simply looking forward.

“I can give a damn what happened last year, to be honest with you,” Glenn said. “The only thing I know is I have a job to do and my job is to make sure this defense plays at a high level.”

NOTES: During Tuesday’s practice, rookies Amon-Ra St. Brown and Ifeatu Melifonwu got into a brief fight. Instead of ejecting them from practice or punishing them with sprints, Campbell, a former tight end with the Giants, had the two line up against each other for another rep. The Lions head coach said players can benefit from small scuffles. “I just think they make you practice better. They make you practice harder. You don’t want to lose to that guy. You’re pissed off.” … The Lions had several players leave Wednesday’s practice early, including outside linebacker Julian Okwara and running back D’Andre Swift. Both walked off under their own power.