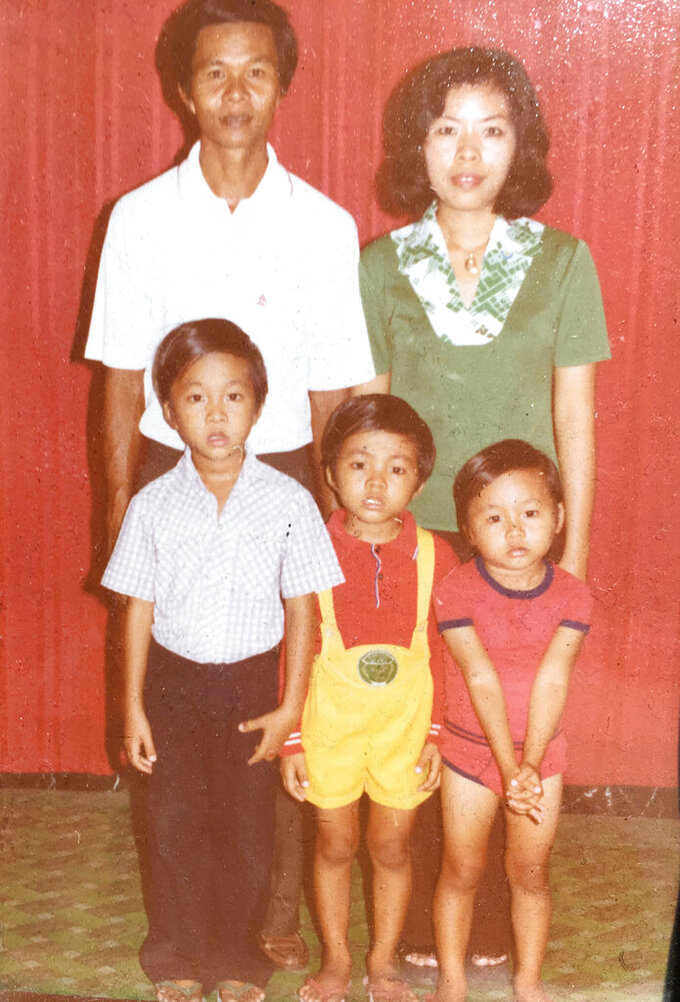 In this image provided by Lo van Pham, Lo van Pham, front center, his parents and siblings pose for a photo before the family came to America. Lo van Pham’s journey to the NFL began when he fell in love with sports upon arriving in Texas after living in refugee camps with his family. More than 40 years later, van Pham is set to become the first Asian American to officiate in the NFL. (Lo van Pham/NFL via AP)

Lo van Pham’s journey to the NFL began when he fell in love with sports upon arriving in Texas after living in refugee camps with his family.

More than 40 years later, van Pham is set to become the first Asian American to officiate in the NFL.

“I never dreamed about being the first of anything,” van Pham said on the AP Pro Football Podcast. “It’s just a great honor. People reaching out to me, reminding me of how special this is, and I just want to do the right thing and carry whatever message I need to carry to represent not only our Asian culture and Asian friends, but also really to represent all minorities, whether Middle Eastern, just different backgrounds, different people that are out there. I want to communicate to convey the fact that if you work hard, prepare yourself, commit and do the things that you can control, your desires and your passion will carry you to the next level in whatever endeavor you choose.”

Before he was introduced to football in America, van Pham and his parents and two brothers survived traveling the jungles of South Vietnam and bounced around refugee camps in Laos, Thailand and the Philippines for about three years. He was too young to remember much of that experience, but his parents filled him in as he got older.

“They were telling me how, obviously, filthy it was, how dirty it was,” van Pham said. “But other than that, I remember my first night here in America we stayed in a kind of a makeshift hospital where they boarded us for the first few weeks until we got our feet on the ground.”

Van Pham, 49, grew up surrounded by Dallas Cowboys fans in Amarillo, Texas. He started playing football as a kid and continued through high school. He turned to officiating to stay connected to the sport while pursuing a graduate degree at the University of Colorado.

“When I signed up for it, it was kind of out of boredom and out of love for the game,” he said. “I remember telling my friends what I was doing, their first comment: ‘Are you nuts? Are you crazy? You got better things to do on a Saturday and Sunday.’

"I actually love this. This is what I grew up playing, and I just absolutely love the game. And from there, it just made me want to get better.”

Van Pham attended officiating clinics and camps after moving back to Texas from Colorado. He trained with a high school association and developed his skills as an official.

Van Pham joins the NFL from the Big 12 Conference. He’ll work as a side judge while maintaining his day job because officials aren’t full-time employees. Van Pham’s background is civil structure engineering.

“Since being in Power Five football, most of my friends seem to think that football is really my full-time job, and my real job is my part-time job,” he said.

The NFL has 121 on-field game officials, 49 of them are women or minorities.

Being a dad is van Pham's favorite job; he and his wife, Kelly, have two sons ages 7 and 2.

“They keep me humble,” he said. “They remind me of what my job is that’s No. 1, be a father. That’s the most important thing to be a father and to be a great husband.”