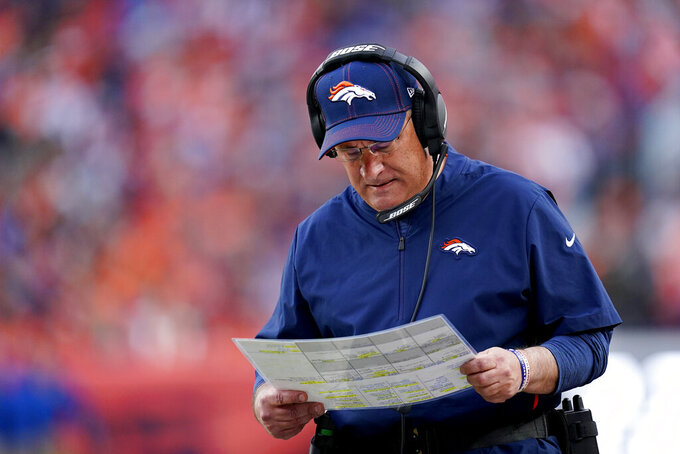 Denver Broncos head coach Vic Fangio looks over his play chart during the second half of an NFL football game against the Detroit Lions, Sunday, Dec. 22, 2019, in Denver. (AP Photo/Jack Dempsey)

ENGLEWOOD, Colo. (AP) — The praise of rookie quarterback Drew Lock wasn't overly lavish. The endorsement of him could be considered on the mild side.

And yet coming from old-school Denver Broncos coach Vic Fangio, the approval felt a tad more spicy. Fangio has certainly liked what he has seen out of Lock — so far.

"He's done enough to show that he definitely could be the guy," Fangio said Monday. “I'm very encouraged by what Drew has done these four games.”

Lock's confidence permeates throughout the locker room of the Broncos (6-9). His talent is starting to surface.

At 3-1 as a starter, the second-round pick out of Missouri has given a glimpse of what could be in store down the road even through the growing pains.

“This is a necessary trip that I'm going on right now,” he maintained.

Lock's first start was about conquering nerves against the Los Angeles Chargers.

His second was tuning out a hostile crowd in Houston.

His third playing in the snow and back home in Kansas City.

And in his fourth, the chance to lead a comeback in helping the Broncos rally for a 27-17 win over Detroit.

"Going into the next year where I can be the guy and say that I have certain experiences from this year to take into next year, that's big for my development and for this program, too," Lock said.

For his final showing of the season, Fangio wants to see Lock reach another level.

"He's capable of more," Fangio explained. “He's played good, but I think he can play better.”

That shows Fangio his young QB invested his time wisely while sidelined. Lock spent the opening 11 games on injured reserve recovering from a thumb injury he suffered in the preseason. It gave Lock a chance to digest the playbook at his pace.

That time also gave him a chance to earn the respect of teammates. More specifically, running back Phillip Lindsay.

"Once I got my first opportunity to prove to him that I can be his quarterback of the future and help him win a lot of games, I wanted to do that," Lock said. “His support and how much our relationship means, it's really important to me.”

On Sunday, the Lions took away the deep pass from Lock by playing zone.

So he relied on short passes with his longest completion just 20 yards. He didn't try to force things.

That made an impression.

"He has the whole locker room behind him. Everyone loves him here," defensive lineman Shelby Harris said. “I swear, he reminds me of Brett Favre. I grew up a Packers fan and he just reminds me of a gunslinger. We all love Drew and we're all behind him. We just can't wait to see his progression.”

The running game even behind a banged-up offensive line. Lindsay gained 109 yards and had a score, while Royce Freeman also added a short touchdown run. The team averaged 4.5 yards per carry.

The special teams after Jamal Agnew returned a punt 64 yards for a score.

WR DaeSean Hamilton scored his first touchdown of the season. He finished with six catches for 65 yards. This after having a few drops earlier in the year. "Drew's got the confidence in him," Fangio said. "He's done a good job catching the ball of late."

Maybe a little in LB Todd Davis, who was second on the team with six tackles against Detroit. Part of that was due to the Lions targeting him.

The entire locker room was hit hard by the flu bug last week, with the team joking that rookie offensive lineman Dalton Risner was patient zero. The team brought in the "super-duper cleaning crew," Fangio said. “They scrubbed down everything — in the meeting rooms, bathrooms, the showers, the locker room. We tried to do everything we could.”

As for offensive lineman Elijah Wilkinson (ankle), Fangio wasn't sure yet if he could play Sunday.

42 — Number of yards rushing Lindsay needs to reach the 1,000-yard mark for a second straight season.

The Broncos finish the regular season with a game against an Oakland team that's still mathematically in the playoff chase. “It's another opportunity for us to win a game at home,” Fangio said.