Luck finds cost of football too pricey to continue career 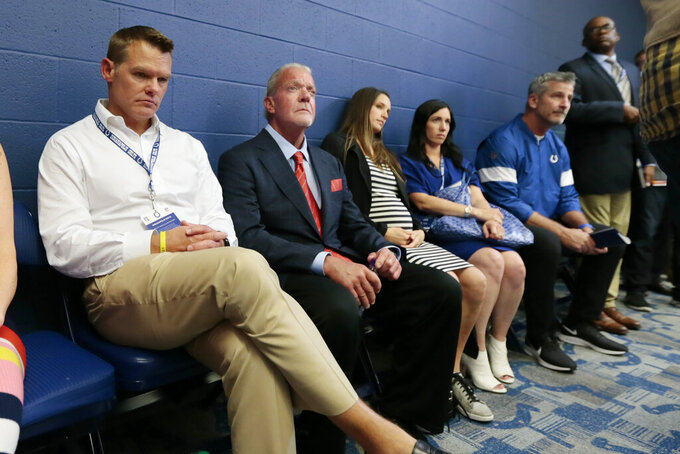 He loved football. He loves life even more.

So when the 29-year-old Luck thought another long, laborious comeback journey jeopardized his future, he believed walking away from the sport and potentially hundreds of millions of dollars was the only logical choice.

"For the last four years or so, I've been in this cycle of injury, pain, rehab — injury, pain, rehab — and it's been unceasing, unrelenting, both in season and off season," Luck said following Saturday night's loss to the Chicago Bears. "I felt stuck in it, and the only way I see out is to no longer play football. It's taken my joy of this game away."

The announcement and the timing — two weeks before the Indianapolis Colts' season opener against the Los Angeles Chargers — shocked the football world.

But this was not a spur-of-the-moment decision.

After three injury-plagued seasons, Luck returned last year with a new perspective about the physical pain, mental fatigue and emotional agony it took to keep fighting his way back. Late last summer, he described his state of mind throughout the continual rehab with words such as "sad," ''miserable" and "scared."

Last month, as the lingering pain in his lower left leg forced him off the practice field yet again, Luck told reporters that he promised himself after playing through the shoulder pain in 2016 and missing the entire 2017 season, he would be honest with himself, his coaches, teammates and the organization about how his body felt.

At the time, Luck said he thought even limited practices were detrimental to himself and the team.

"It took great courage to make his decision to walk away from the game, but no matter how difficult he did what his heart told him and I am proud of him for being honest with himself and the team," said former Colts coach Chuck Pagano, now the defensive coordinator for the Bears. "With Andrew it was always about more than football."

While some fans booed Luck as he left the field Saturday night, other players supported him. They understand how dangerous and debilitating the sport can be, which is why some are quitting at earlier ages.

Luck just happens to be the biggest name yet on that expanding list.

"I think it takes an immense amount of courage, an immense amount of self-reflection and a lot of guts to do what he is doing," Houston defensive end J.J. Watt said. "I am sure people have their ways of looking at it and their ways of trying to say what they would do in his shoes. But the truth is, no one is in his shoes. Nobody has to go through what he has had to go through. Nobody has been through the rehab and the injuries. ... I respect the hell out of it. I think it takes a whole lot to walk away from a ton of money like that."

Colts owner Jim Irsay estimates Luck could have made as much as $500 million if he lasted as long as Brett Favre, Tom Brady or Peyton Manning, Luck's predecessor.

But Luck was never in it for the money or the fame — like others who left the game on their terms and in their prime.

Barry Sanders retired at age 31 after winning four NFL rushing titles and within reach of breaking Walter Payton's career rushing record. At age 30, Calvin Johnson called it quits after his sixth straight Pro Bowl appearance. Jim Brown walked away at age 30 for a budding movie career, less than a year after winning his third and final MVP award.

They never came back, and Luck said he doesn't anticipate a return, either, though he's young enough to do it.

Many others, such as Hall of Famers Gale Sayers and Terrell Davis, were forced out by injuries or age.

Luck seems to be a combination of the two, largely the result of a porous offensive line that allowed the top overall draft pick in 2012 to take more hits than any quarterback in the league during his first five seasons.

He was good enough to lead the Colts to playoff appearances in each of his first three seasons, the 2014 AFC Championship game and orchestrate the second-largest comeback in playoff history. And when he returned healthy last season, he took the Colts back to the playoffs and was a runaway winner in the league's Comeback Player of the Year award balloting.

It just wasn't enough for Luck.

"We all expect we're going to play this game forever," Seattle quarterback Russell Wilson said. "The reality is for most players, it's not very long. No matter how good we are, or whatever it may be, there's life after this game, too. I think that's a thing we always have to balance and always have to weigh."

Luck is the sixth quarterback of the 11 selected in 2012 out of football.

Wilson and Nick Foles, both third-round picks that year, own Super Bowl rings. Kirk Cousins, a fourth-rounder, is the starter in Minnesota.

The other two still around — Robert Griffin III and Ryan Tannehill — had promising careers derailed by injuries, too. Griffin, the No. 2 pick who played high school football in Texas like Luck and beat Luck out for the 2011 Heisman Trophy award, is fighting for a roster spot in Baltimore. Tannehill, the No. 8 pick, is the backup to Marcus Mariota in Tennessee.

Luck didn't want to spend more countless hours in the training room now that he's married and will soon become a father.

He'd rather travel the world, watch soccer, put his architectural degree from Stanford to use and suggest good reads for the Andrew Luck Book Club. Perhaps he will come back to football one day. Or maybe he'll choose a new career.

But after throwing 171 touchdown passes and for nearly 24,000 yards, Luck found football simply wasn't worth the cost.

"I'm exhausted — and quite tired," he said during an emotional farewell speech. "The only way forward is to remove myself from this cycle."