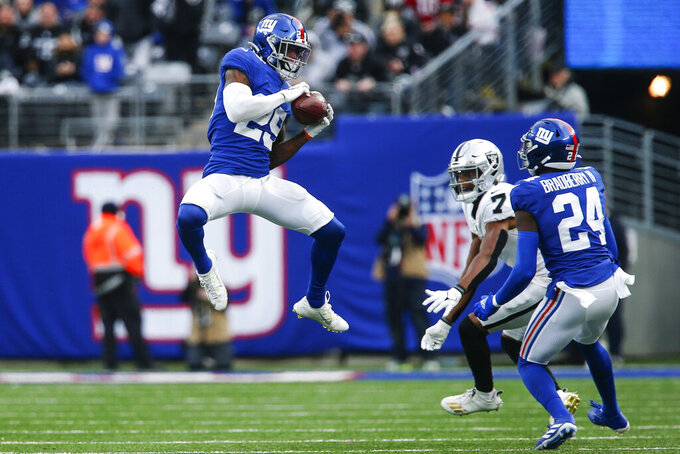 EAST RUTHERFORD, N.J. (AP) — After testing positive for COVID-19 on Wednesday, safety Xavier McKinney spent most of the week not knowing whether he was he was going to play for the New York Giants against the Las Vegas Raiders.

McKinney is not vaccinated and positive test would have put him in the Aaron Rodgers category and sidelined him for a while. Thank goodness for false positives.

McKinney returned an interception 41 yards for a touchdown early in the second half and picked off another errant throw by Derek Carr late as the added to the Raiders’ post-bye woes with a 23-16 victory over Las Vegas on Sunday.

“I just tried to stay locked-in,” said McKinney, who was able to attend team meetings virtually and was cleared to play on Friday. “Earlier in the week I didn’t know if I was going to play so I just stayed locked in and focused.”

McKinney refused to say why he will not get vaccinated.

Carr threw a 2-yard touchdown pass to Hunter Renfrow for the Raiders (5-3), who are an NFL-worst 3-16 after a week off over the last 19 years. The usually accurate quarterback also missed a wide-open Darren Waller for another score just before halftime as the Raiders settled for three short field goals by Daniel Carlson, who also missed a 25-yarder in the second half.

Carr drove Las Vegas to the Giants 13 in the final minutes. On second-and-10, he was strip-sacked by Quincy Roche and Leonard Williams recovered the loose ball to ice the game.

“I had a feeling they were going to step up,” Engram said. “The defense has been playing lights out the past three weeks.”

The loss was also the first for interim coach Rich Bisaccia, who last month replaced Jon Gruden, who resigned after it was revealed that he wrote homophobic and misogynistic emails between 2011 and 2018.

The game was the first for Las Vegas since receiver Henry Ruggs III slammed his car into another vehicle early Tuesday morning, creating an inferno that killed a woman and her dog. The 22-year-old player was released by the team hours later.

McKinney's go-ahead score came on the third play of the second half with the Raiders facing a third-and-7 at their own 35. Renfrow ran an out pattern in front of the Las Vegas bench and McKinney undercut the route, caught the ball as the receiver fell and had a clear field to the end zone.

“I felt Renfrow go out and I was just all eyes on the quarterback all the time,” McKinney said. “I just trusted my instincts.”

The Raiders took a 13-10 halftime lead in a game in which each team scored a touchdown on its opening possession. Jones hit Engram to cap a seven-play, 75 yard drive to start the game and Carr and Renfrow combined from 2 yards out to cap a 73-yard Raiders march.

Carlson of Las Vegas sandwiched field goals of 25 and 32 yards around a 35-yarder by Gano for the other scoring. The 32-yard field goal came one play after Carr missed Waller alone at the back of the end zone.

NOTES: Las Vegas DE Yannick Ngakoue had two sacks, his third multiple effort in the past four games. ... Waller returned from an ankle injury and had seven catches for 92 yards. Renfrow also had seven catches for 49. ... Jones finished 15 of 20 for 110 yards. ... New York finished with 245 total yards. ... Josh Jacobs led the Raiders in rushing with 76 yards on 13 carries. .... Giants receiver Kenny Golladay played for the first time since hurting a knee on Oct. 10 and had two catches for 28 yards.

Giants: TE Kaden Smith had a concussion in the first half and did not return. Giants running back coach Burton Burns missed the game after testing positive for COVID-19.

Giants: After a bye, travel to Tampa Bay for a Monday night game on Nov. 22.