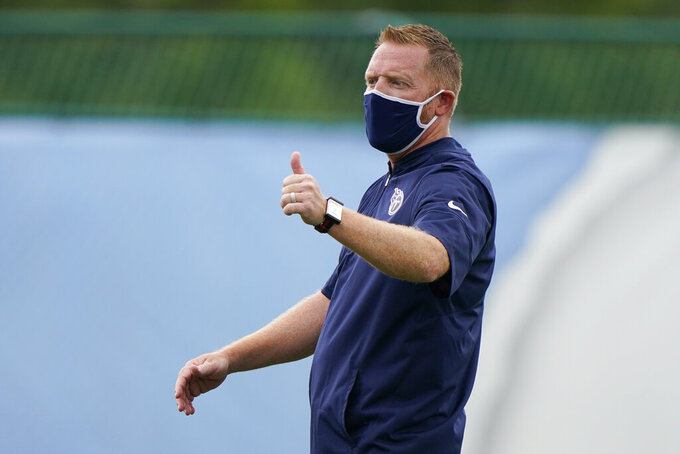 And Vrabel also named Shane Bowen the defensive coordinator after he handled the job for the Titans without the title throughout the 2020 season.

The Titans coach said in a statement he spent the past two weeks evaluating his current staff and talking with others outside Tennessee.

“Todd did a great job with the tight ends over the last two years and had important role in the game-planning process each week,” Vrabel said. “I was impressed with the details of his teaching and the production from his group and the offense in general.”

Downing replaces Arthur Smith, who was hired as the Atlanta Falcons' new coach earlier this month.

He takes over an offense that tied for second in the NFL, averaging 396.4 yards a game and ranked fourth in scoring 30.7 points a game. All-Pro Derrick Henry became the eighth man to run for at least 2,000 yards in a season while Ryan Tannehill threw a career-high 33 touchdown passes as the Titans (11-5) won the AFC South.

“I am sure he will have some new ideas to implement, but the core system will be in place to build upon, which I think is important,” Vrabel said.

Bowen handled defensive meetings and in-game play-calling last season after Dean Pees retired. The Titans struggled and ranked 28th in total yards allowed per game, 29th against the pass, 24th in giving up 27.4 points a game and last on third down conversions (51.8%).

The Titans ranked seventh in the NFL with 23 takeaways, which led to 71 points scored. They had 15 interceptions, which also was seventh in the NFL and the Titans’ most since having 19 in 2012. Bowen also has coached Harold Landry since being drafted in 2018. Landry has 19 sacks, second in that draft class to Bradley Chubb (20 1/2).

“We are going to work hard to improve that side of the ball through better coaching, improving our system and our players,” Vrabel said. "I like the group we have on the defensive staff, and I am confident that we will improve.”

Downing has been with the Titans the past two seasons coaching tight ends working with the passing and run game. He was offensive coordinator for the Raiders in 2017 after spending two seasons as quarterbacks coach with the team where he worked closely with Derek Carr.

At the time, coach Jack Del Rio chose Downing to run the offense after not renewing Bill Musgrave’s contract following a 12-4 season in 2016 when the Raiders finished seventh in the league in scoring.

The Raiders' offense regressed significantly under Downing despite returning almost all of the key players from the 2016 season. The Raiders fell to 16th in scoring, and Carr posted his worst season outside of his rookie campaign in 2014. Del Rio and the entire staff were fired after that season.

Udeze was linebackers coach at Vanderbilt last season and was a defensive analyst for LSU during the Tigers' national championship season in 2019. He started coaching in 2015 at his alma mater USC as an assistant strength and conditioning coach before working the next three seasons on the Trojans' defensive staff.

The 20th overall pick by Minnesota in 2004, Udeze played four seasons before leukemia ended his career.