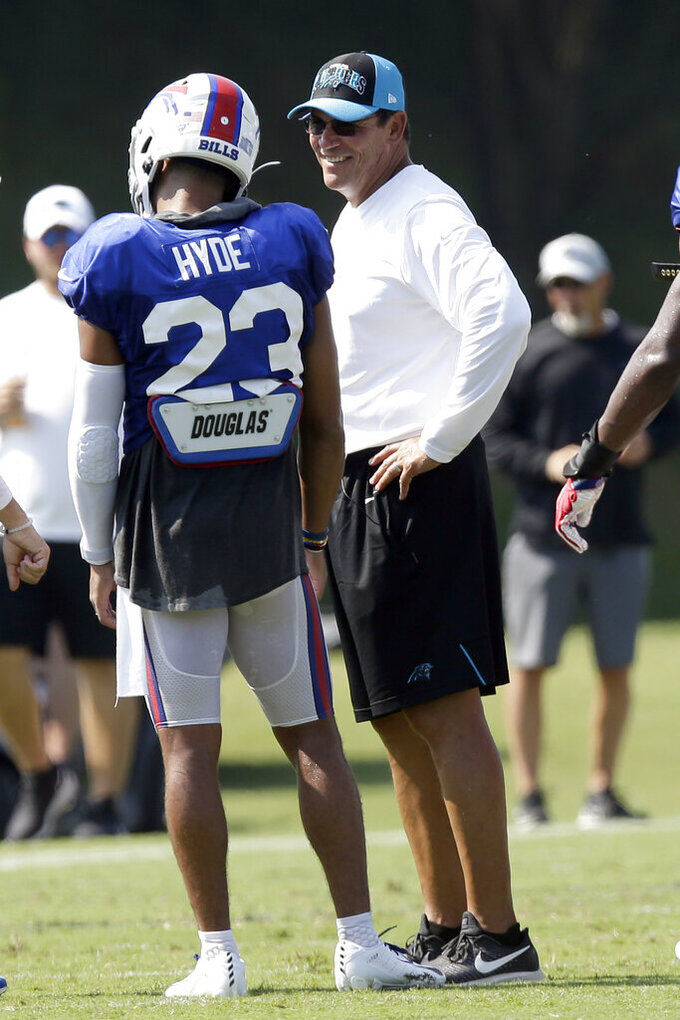 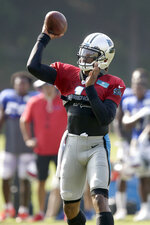 SPARTANBURG, S.C. (AP) — Captain Munnerlyn has no doubt that ex-teammate Cam Newton will bounce back from a shoulder injury in a big way this season.

All it took to convince Munnerlyn was watching Newton step up in the pocket and uncork a 50-yard strike to a streaking Curtis Samuel down the middle of the field, one of the biggest highlights of Tuesday's joint practice between the Carolina Panthers and Buffalo Bills at Wofford College.

"It's like night and day — just night and day. His arm looks a whole lot better," said Munnerlyn, who played cornerback the last two seasons for Carolina before signing with the Bills.

Munnerlyn watched firsthand as Newton struggled with shoulder soreness during the second half of the 2018 season.

The Panthers QB could barely throw the ball 20 yards downfield and had to be subbed out on Hail Mary passes. Newton wound up missing the final two games before undergoing arthroscopic surgery on his right shoulder in January.

Along with the deep throw, Newton was effective running Carolina's hurry-up offense during one team drill, completing a series of short intermediate passes to keep the chains moving.

Panthers coach Ron Rivera also liked what he saw from Newton and the first-team offense in what was the first two of two practices against the Bills before the teams meet Friday night in a preseason game in Charlotte, North Carolina.

"Watching the offense I thought we handled some things pretty well," Rivera said. "What is interesting is you get anxious and a little overhyped and I thought that was part of our problem early. Once our guys settled in and got into a little bit of a routine you felt a lot better about things."

Other things from the joint Bills-Panthers joint practice:

Both coaches emphasized to players to use the two days to learn as much as they could from the opposition, and Bills quarterback Josh Allen took that message to heart.

After practice Allen tracked down Carolina's Luke Kuechly and asked the six-time Pro Bowl linebacker why he reacted to a particular play during the 11-on-11 team period.

"I just wanted to know why he did what he did in a certain concept that we ran," Allen said. "And he was asking what we were looking for and what our read is on that play was. So I took a couple of words from him."

Allen called Kuechly one of the smartest players in the NFL and was eager to pick his brain.

"At the end of the day, we don't play each other this year (in the regular season) so we are just trying to make each other better," Allen said.

Bills center Mitch Morse was back in pads and wearing a red non-contact jersey on Tuesday, but remains in the concussion protocol. Bills coach Sean McDermott refused to speculate on how long it will be before Morse will be ready to play.

Morse has been sidelined since being diagnosed with a concussion on July 29, five days after the start of training camp.

Panthers first-round draft pick Brian Burns left practice midway through practice and did not return. Trainers were treating Burns' ankle on the sideline, but Rivera said after practice he had no information on injuries.

Burns had a smashing debut for the Panthers this past Thursday night against the Bears with two sacks while starting at outside linebacker in the team's new 3-4 defense.

It's becoming increasingly obvious that wide receiver Curtis Samuel is going to play a huge role in the Panthers offense this season. The versatile Samuel has lined up at a variety of positions and had as many touches Tuesday as anyone on the Carolina offense other than running back Christian McCaffrey.

"Coaches can call any play, but it's up to me to get open," Samuel said. "As long as I'm getting open I'm going to get the ball."