Murray in motion: Cards weigh how much to run star QB 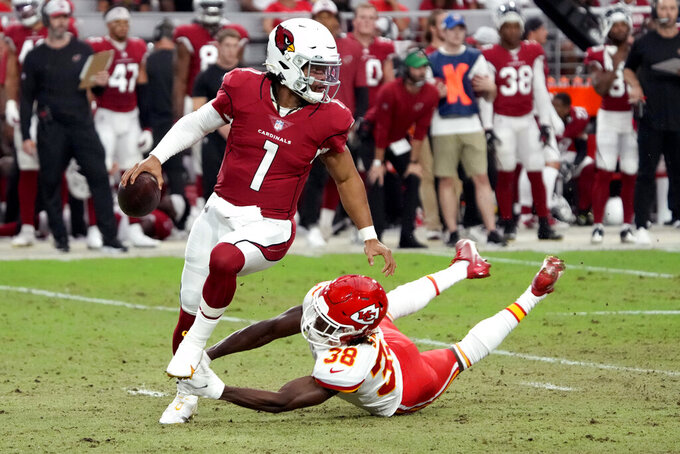 TEMPE, Ariz. (AP) — Kyler Murray was showing off his arm again at the Cardinals practice facility, tossing tight spirals over and over right to the fingertips of receivers who cycled through drills on Wednesday.

There's no doubt Arizona's young quarterback can throw the football.

It's his legs that provide the intrigue.

The 24-year-old is entering his third season, fresh off a Pro Bowl season that included nearly 4,000 yards passing and 26 touchdowns. But it was his running that occasionally made the Cardinals' offense close to unstoppable: His 819 yards rushing ranked second for a quarterback in the NFL behind Baltimore's Lamar Jackson.

Maybe — but don't count on it.

“I think he's going to do whatever it takes to win the game,” Arizona coach Kliff Kingsbury said. "He's got a great feel for that, great instincts at the position. How to protect himself, when to get down. So I think he'll continue to play his game.

“We have some real weapons at wideout, so if we have to drop him back a bunch, we feel confident in doing that. But he's one of the more dynamic athletes in the league so he's going to continue to play that way.”

The Cardinals have insisted that Murray's running ability is a luxury item and not always necessary for the offense to score.

The stats from 2020 tell a slightly different tale.

Murray was on pace for a 1,000-yard rushing season and scored 10 touchdowns on the ground during the season's first nine games, which helped push the Cardinals to a 6-3 start.

But that production dried up over the final seven weeks: Murray scored just one rushing TD over that span, Arizona went 2-5, and the 8-8 record left it out of the playoff field.

Murray's ability to run — or at least the threat of it happening — seems crucial.

But so is keeping him healthy.

Murray's importance was obvious in the season finale when he suffered an ankle injury while being sacked, missed about half the game and the Cardinals lost to the Rams 18-7. The loss kept Arizona out of the playoffs.

The Cardinals are trying to make the postseason for the first time since 2015. Their regular season starts on Sunday on the road against the Tennessee Titans.

“I expect (Murray) to play at a high level,” Kingsbury said. “I thought last year he took a big step and this year I expect him to take another big one this season. We're playing against a very good team, we understand that, but he's looked really sharp during camp."

Murray's supporting cast this season remains mostly the same, though a few changes were made.

Veteran receiver A.J. Green was signed in the offseason and is expected to be Murray's No. 2 option behind All-Pro Deandre Hopkins, who caught 115 passes for 1,407 yards and six touchdowns last year. Running back James Conner will join holdover Chase Edmonds in the backfield, signing with the Cardinals following four seasons with the Pittsburgh Steelers.

“If I don't make stuff happen with what I've got then I'm not doing my job — that's how I see it,” Murray said. “I don't need anything else.”

The hope is Murray's scrambling won't always be necessary, even if it's often very useful.

“You just trust your guys and trust your reads,” Murray said. “If something breaks down, I've got the instincts, the feet and the legs to be able to make something happen.”

The Titans said they have plenty of respect for Murray's arm, but it's his running that makes him particularly difficult to stop. The Cardinals might not be tipping their hand about how much their quarterback will run, but it's clear Tennessee's defense expects it to happen.

“He’s a dangerous, dynamic athlete, somebody that can do both because not only can he run, he can make all the throws. He has a really strong arm," Titans safety Kevin Byard said. “I kind of mentioned ... he’s a jitterbug out there. I mean, you can’t really try to go get any kill shots against him, almost kind of just capture him, making sure you’re limiting his gains.”