Network bosses pleased with NFL TV packages for this season 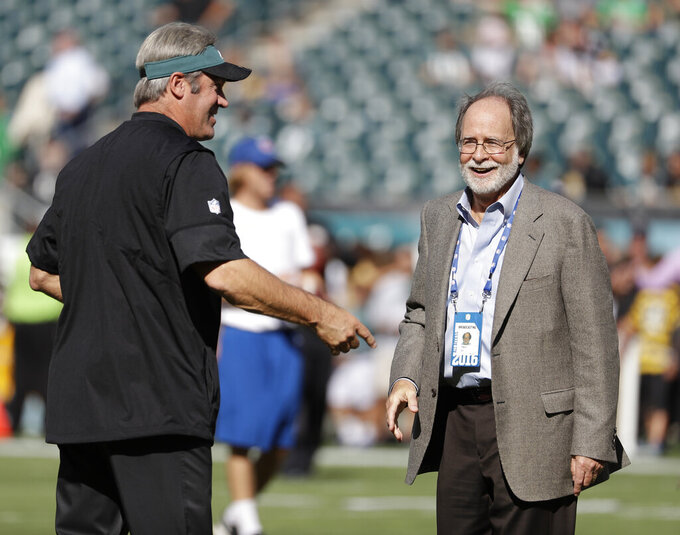 In this Sept. 25, 2016, photo, Howard Katz, right, and Philadelphia Eagles head coach Doug Pederson are seen during an NFL football game against the Pittsburgh Steelers, in Philadelphia. Katz has the most unenviable task in the National Football League. As the league’s senior vice president of broadcasting and media operations, he is the point person for formulating the schedule and trying to make the executives of the league’s four broadcast partners happy. Before the public got their first look at the upcoming regular-season schedule on Wednesday, April 17, 2019, Katz relayed to Fox, CBS, NBC and ESPN what games they received. (AP Photo/Michael Perez)

Howard Katz has the most unenviable task in the National Football League. As the league's senior vice president of broadcasting and media operations, he is the point person for formulating the schedule and trying to make the executives of the league's four broadcast partners happy.

Before the public got a look at the upcoming regular-season schedule on Wednesday, Katz relayed to Fox, CBS, NBC and ESPN what games they received. In interviews with network executives, all four networks thought Katz's task of formulating this year's packages was fair.

"How we allocate is always tricky. You have to make sure the prime-time packages are strong while making sure there is enough quality and quantity for the Sunday afternoon games," Katz said.

NBC "Sunday Night Football" Executive Producer Fred Gaudelli can empathize with the challenges that Katz faces, especially because it seems to get more difficult each season.

"It is a lot harder compared to when we first started with the Sunday Night package in 2006," he said. "Now there are a full season of Thursday night games and more London games. Yet, he has managed to treat everyone fairly."

Here are five takeaways from the networks about their packages:

OPENING WEEK: The Green Bay-Chicago opener on Sept. 4, which will kick off the league's 100th season, was announced during the league meetings in late March. There were many options for New England's opponent on the first Sunday night game, but eventually the league settled on Pittsburgh in a matchup of the only two franchises to win six Super Bowls.

The Monday Night games were surprises. Conventional wisdom had the Browns at Jets leading off the doubleheader, but it will be Houston visiting New Orleans. Oakland hosts the late game for the second straight season, but this time it is against Denver.

"There were a dozen different games that we looked at, but at the end of the day the puzzle fit best with Texans-Saints," Katz said. "Both teams were in the playoffs last season and have great quarterbacks."

The two Monday night games are on the road, but NBC and Fox got their wish of having Cleveland home games. The Browns host the LA Rams in Week 3 in their first Sunday night appearance since 2008, and host Pittsburgh on Thursday night in Week 11.

Even though the Steelers did not make the playoffs and lost key playmakers in Antonio Brown and Le'Veon Bell, they are still making the maximum five prime-time appearances. Katz said that free agency did not result in any teams losing spots in prime time.

DIVYING UP THE PATRIOTS: Fox and CBS were able to retain two of the matchups that had the highest demand. Fox gets the Patriots' game against the Cowboys in Week 12 and CBS will have the AFC championship game rematch against the Chiefs in Week 14.

New England's other Sunday night appearances are road games against the Ravens (Week 9) and Texans (Week 13). The Monday night game is at the AFC East rival Jets (Week 7) and the Thursday night game has them hosting the Giants (Week 6).

MONDAY, MONDAY: Five of the final eight "Monday Night Football" games on ESPN are division matchups, which is similar to last year's schedule. The late-season division games last season was one of the reasons why ESPN had an eight percent ratings increase.

"We've got some strong rivalries and division games, but we are also going to great venues again," ESPN Executive Vice President of Programming Burke Magnus said. "We are going to New Orleans twice, New York three times, San Francisco twice along with heading to Seattle, Philadelphia, Pittsburgh and Mexico City."

CROSS FLEX, CROSS FIT: The AFC schedule does not have the same depth as the NFC, even before the prime-time games were determined.

Since the league started cross flexing games in 2014 though, CBS has received some quality NFC matchups. Their first two doubleheaders feature good NFC battles with New Orleans-Seattle in Week 3 and Minnesota-Chicago in Week 4.

"The cross flexes have been a good addition and helped equalize certain weeks," CBS Sports chairman Sean McManus said. "It gives broad exposure to games that wouldn't get as much."

THE VIEW FROM FOX: Fox Executive Vice President Michael Mulvihill, who serves as the network's liaison with the NFL, said most of the games that Fox had on its first list of Thursday night preferences they ended up getting. The first Fox Thursday game is Philadelphia at Green Bay to start Week 4.

Mulvihill was also very pleased with how the 4:25 p.m. games on doubleheader weeks worked out. Dallas will be featured in the late spot in the last four doubleheaders, which would benefit Fox if they are in playoff contention.