New coaching staff but same old problems for the Chargers 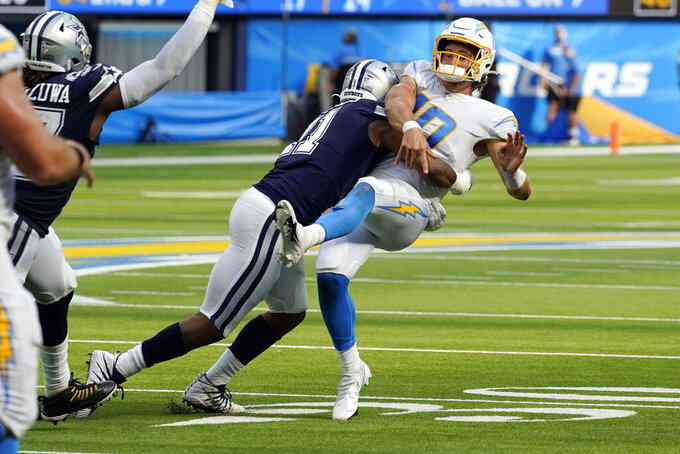 The Los Angeles Chargers have a new coaching staff, but many of the same problems that plagued them under previous regimes cropped up again in Sunday's 20-17 loss the Dallas Cowboys.

Twelve penalties, struggles in the red zone and not being able to get off the field on third down all resulted in the Chargers' 17th one-score loss since the start of the 2019 season.

“A big mission statement of ours is to play clean football, and it hasn't been clean through two weeks,” coach Brandon Staley said.

Ten of the Chargers' 12 penalties were on the offensive end, including two that negated touchdowns. Justin Herbert ended up throwing an interception in the red zone after the first one and Los Angeles had to settle for Tristan Vizcaino's third field goal to tie it at 17 after an illegal shift call wiped out another TD.

Opponents are 9 of 20 on third down in the first two games, with the 45% conversion rate being eighth worst for the defense.

The most frustrating stat for Staley, Herbert and offensive coordinator Joe Lombardi is the three no scores in the red zone, including two in goal-to-go situations. Herbert has been responsible for all three turnovers with a fumble and two interceptions.

The penalties, turnovers and missed tackles leave room for a lot of corrections going into next Sunday's key AFC West game at Kansas City.

“There was a lot to unpack today, but the main takeaway for me is that the Los Angeles Chargers are in control of what happened yesterday, and we need to put the focus on us," Staley said.

The upcoming game at Kansas City begins a difficult four-game stretch for the Chargers, who are 1-1 for the fourth straight season. They host Las Vegas in a Monday game on Oct. 4 that might sound like a road game with the amount of Raiders fans in Southern California. That's followed by hosting Cleveland on a short week and then an Oct. 17 trip to Baltimore before the bye week.

Mike Williams is off to the best start of his five-year career with 15 receptions for 173 yards and two touchdowns. Williams showed his versatility during the Chargers' lone touchdown drive when he found an opening in the middle of the Cowboys' secondary while Herbert was scrambling for a 27-yard catch. On the next play, he caught a receiver screen and went 11-yards for the touchdown.

Through two games, the Chargers are allowing 162 yards per game rushing, which is fourth highest in the league.

“That starts up front. We need to be better as an edge group and have to tackle better,” linebacker Joey Bosa said. “We have to execute on every part of the ball and every level of the defense.”

Rookie cornerback Asante Samuel Jr. had his first interception and a pair of pass breakups after a rough start in the opener when he was penalized 35 yards on a pass interference call.

Storm Norton struggled at right tackle, allowing nine quarterback pressures and five quarterback hits, according to Pro Football Focus. Right tackle is again a concern for the Chargers with Bryan Bulaga on injured reserve for at least the next two games due to back issues. Staley said Monday there aren't any plans to bench Norton.

“Storm was a little up and down yesterday. I know that he had a tough day, but that’s not the reason why we lost that football game,” Staley said. “I think that from a fundamental standpoint, that’s where he can improve the most.”

The Chargers got out of the game without any significant injuries. Staley is hopeful defensive lineman Justin Jones will be able to return to the lineup this week after missing the Dallas game due to a calf injury.

With Denver and Las Vegas already at 2-0 and favored in their games next week, Sunday's game at Kansas City takes on more importance. The Chargers won last year's regular-season finale at Arrowhead, but that was when the Chiefs were sitting most of their players.