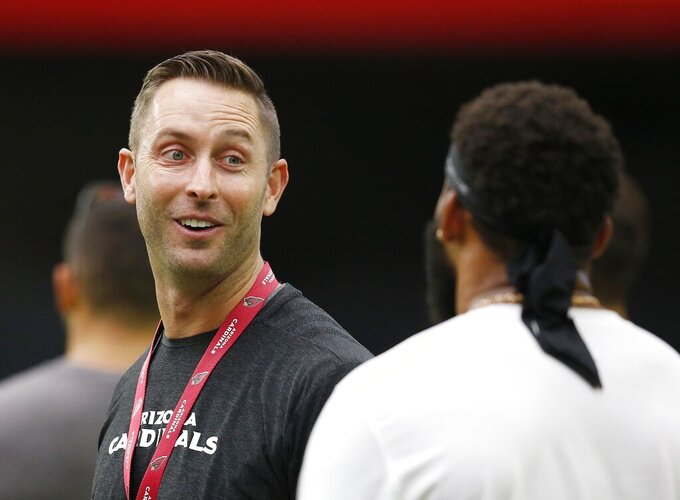 GLENDALE, Ariz. (AP) — The Arizona Cardinals have a rookie coach, a rookie quarterback and an offensive system not only new to them, but to the NFL.

As training camp story lines go, the team with the league's worst record a year ago is generating plenty of buzz.

"We're still working through who we're going to be offensively," coach Kliff Kingsbury said Thursday before Arizona's first practice of training camp. "We're blending a lot of things together, a lot of thoughts from different coaches who have been at a high level at different places and I'm excited to see what it ends up as."

The Cardinals had a dismal season under Steve Wilks in 2018, finishing in the NFL cellar at 3-13 — their worst record in 18 years — and among the league's most futile teams on offense and defense.

Arizona's brass saw enough from Wilks to know he wasn't their man and fired him after one season, a franchise first since 1952.

The rebuilt, new-look Cardinals are being led by Kingsbury, an offensive guru in college making his first NFL head-coaching run. A former NFL quarterback, he's bringing a version of the high-scoring, fast-paced "Air Raid" offense he ran at Texas Tech to the NFL.

Other NFL teams, notably the Chiefs and Rams, have implemented aspects of the up-tempo, wide-open offenses of the college game, but none have gone all-in as Kingsbury is doing.

Being at the forefront of change is certainly risky. Maybe there's a reason no other team has fully embraced an offensive system that became widespread in college football; NFL players are too big, too fast, too smart for it to work — whatever it may be.

Then again, maybe it's because the NFL is a league reluctant to make wholesale change, with teams more likely to experiment than revamp with something unproven.

"I don't see why everybody thinks it can't be successful," Cardinals quarterback Kyler Murray said. "It worked at the college level and I don't see why it can't work at the NFL level."

Murray will be the player directly pulling the strings on the Cardinals' experiment, with headset guidance from Kingsbury on the sideline.

The lone beneficial byproduct of Arizona's generationally bad 2018 season is the reverse-pecking-order nature of the NFL draft; being worst meant the Cardinals picked first.

The Cardinals already had their quarterback of the future in Josh Rosen — or so everyone, including them, thought.

But when Murray decided football was the career path for him — he had already been picked ninth overall in the baseball draft by Oakland — Arizona pivoted on football's most pivotal position.

Murray played just one full season as Oklahoma's quarterback, but was an electric force in cleats.

One of the fastest players on any football field, he extended plays with his feet, juking around and running past defenders left flailing in his wake. Murray's diminutive-for-a-quarterback size (5-foot-10) was not a detriment in the college game; he simply found gaps between the mammoth men rushing at him by adjusting arm angles to throw pinpoint passes.

When the highlight reel ended, Murray sat on a stat sheet showing more than 5,300 yards and 53 touchdowns and the hands of an Oklahoma quarterback were wrapped around the Heisman Trophy for the second straight season after Baker Mayfield before him.

Oklahoma ran a similar offense to what Kingsbury rolled out in Lubbock, so Murray seemed like a perfect fit in the Cardinals' eyes. They also saw him as a generational talent, one a franchise in dire need of a boost could hardly afford to pass up.

Arizona took Murray with the No. 1 pick, shipped Rosen off to Miami for draft picks and handed the reins to the rookie.

"When you look in his eyes, there's nothing timid about him," said Larry Fitzgerald, still one of the NFL's best receivers heading into his 16th season. "He looks confident, he looks ready to go and that's a great sign for a young quarterback."

Cardinals fans and the rest of the league will only get a glimpse of Arizona's offense before the regular season starts. Kingsbury plans to keep it relatively flavorless through the preseason, giving the Cardinals a small element of surprise when the games start to count.

Until then, the Cardinals will continue to work most of it out behind the scenes, honing an offense they hope will pull them out of the cellar.