NFC East goes from laughingstock to juggernaut in 2 seasons 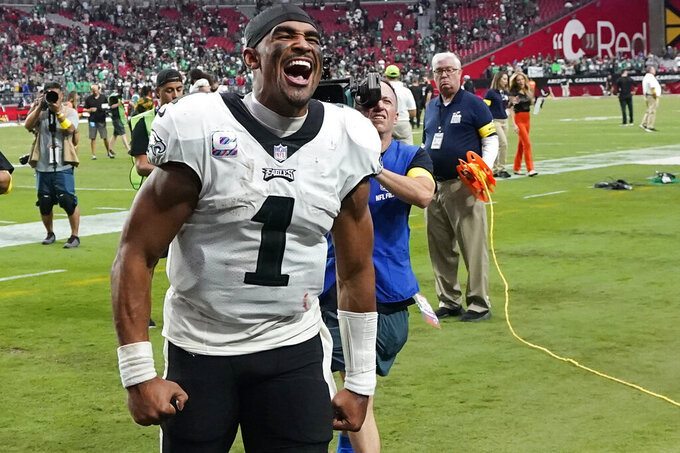 The NFC East has gone from laughingstock to juggernaut in less than two years.

Led by Philadelphia, the league's lone undefeated team and surprising 4-1 starts by the New York Giants and Dallas Cowboys, the NFC East has three teams with at least four wins in the first five games.

This comes two years after Washington won the division with a 7-9 record and the four teams combined for a .288 win percentage in non-division games, the fourth-worst mark of the eight-division era.

NFC East teams have already won 11 games against other divisions through five weeks, tying the total for the division from that lackluster 2020 season.

The Rams (2-3) and Bengals (2-3) have losing records eight months after playing in the Super Bowl.

This marks just the third time that the previous season's Super Bowl participants both have losing records after five games.

New Orleans' versatile Taysom Hill had a game for the ages on Sunday.

Hill ran for 112 yards and three TDs, threw a 22-yard touchdown pass and even recovered a fumble on special teams.

Hill became the 10th player in the Super Bowl era to run for at least three TDs and throw another in the same game. He joined LaDainian Tomlinson (2005 vs. the Giants) and Ronnie Brown (2008 vs. the Patriots) as the only ones to do it while rushing for at least 100 yards in the game.

Josh Allen and Gabe Davis got Buffalo off to a record-setting start Sunday.

Allen's 98-yard TD pass to Davis on the third play from scrimmage against Pittsburgh was the longest touchdown from scrimmage ever scored in the first 90 seconds of a game. The last scrimmage TD of at least 90 yards on the opening drive came when Terrelle Pryor ran for a 93-yard score on the opening play for the Raiders against the Steelers on Oct. 27, 2013.

Davis added a 62-yard TD catch in the second quarter, joining Ja'Marr Chase, Odell Beckham Jr., Lee Evans and Torry Holt as the only players since 2000 with two TD catches of at least 60 yards in the same game.

Tom Brady added another milestone to a career filled with them.

Brady threw for 351 yards in Tampa Bay's win over Atlanta on Sunday for his 40th game in the regular season and playoffs with at least 300 yards passing since he turned 40.

Only 18 other players have at least 40 games with at least 300 yards passing in their entire careers, with Hall of Famer John Elway having as many in his career as Brady has in his 40s.

Brady also won his 23rd career game in the regular season or playoffs when attempting at least 50 passes in a game — 18 more than second-place Dan Marino and Warren Moon.

Kirk Cousins and the Minnesota Vikings have rallied from a deficit in the final 4 1/2 minutes to win the last three weeks against Detroit, New Orleans and Chicago.

Meanwhile, Patrick Mahomes led the Chiefs back from a double-digit deficit for the 12th time in his career in the regular season and playoffs in a 30-29 win over the Raiders.

Mahomes is 12-9 after falling behind by at least 10 points, the only QB with a winning record when facing at least five double-digit deficits. All other quarterbacks in the Super Bowl era have a .155 winning percentage.

In a season where offenses have struggled overall, the Broncos and Colts brought it to a new level with their hapless Thursday night game.

The Colts won 12-9 in overtime in the first game in NFL history when both quarterbacks threw for at least 250 yards and neither scored a touchdown, according to the Elias Sports Bureau.

Teams in the Super Bowl era had been 1-161 when scoring no touchdowns, throwing multiple interceptions and getting sacked at least six times before the Colts won. The only other team to do it was the 1973 Browns in a 12-10 win over the Giants.

This was the seventh prime-time game without a touchdown since 2000 and the ninth overall game in the past 20 seasons when teams combined for no TDs and at least four turnovers.