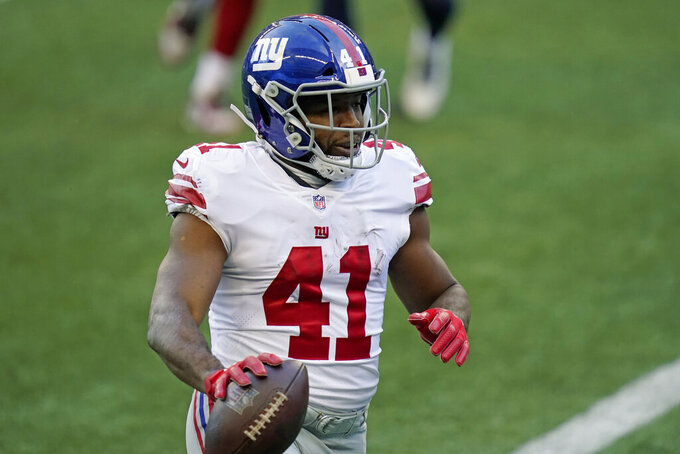 New York Giants running back Alfred Morris runs with the ball for his second touchdown of the second half after a reception against the Seattle Seahawks during an NFL football game, Sunday, Dec. 6, 2020, in Seattle. (AP Photo/Elaine Thompson)

EAST RUTHERFORD, N.J. (AP) — There was a point earlier in the season when the eventual winner of the then-horrid NFC East was being viewed as future fodder for the wild-card games.

None of the four teams was playing well enough to be considered anything but an opening-round loser in the new seven-team format. That has changed, especially the way the New York Giants are playing under rookie coach Joe Judge.

After an 0-5 start, the Giants have won five of the last seven games and taken over first place in the division. Not only are they riding a four-game winning streak, they knocked off one of the NFL's top teams on Sunday with a 17-12 win over the Seahawks (8-4) in Seattle.

What made the road victory even more impressive was the defense shut down Russell Wilson, and the offense rammed the ball down Seattle's throats playing with backup Colt McCoy at quarterback instead of the injured Daniel Jones.

This team has rediscovered smash-mouth football, the type of play that carried the Giants to four Super Bowls between the 1986 and 2011 seasons under Bill Parcells and Tom Coughlin.

That's not to say this team is going to win another Super Bowl. The Giants just aren't going to be a pushover in the playoffs if they get in.

“I think each team’s expectations and progress are unique,” Judge said. “I didn’t really have a definite timetable in terms of where they needed to be at certain points. There are still things we have to have a lot of improvement on and consistency going forward. We’re far from where we need to be or want to be as a team. There’s a lot of work ahead of us. But I was pleased with the constant progress.”

Defensive lineman Leonard Williams, who was franchise-tagged before the season, has enjoyed watching the team grow.

“I think the beginning of the season is when the team and the guys and the coaches prove to each other what type of team we really have,” he said. “It’s easier to be happy and see the good things when you guys are winning, but I feel like we all see the good things in each other and what we have, even when we were losing. That just helped continue to build our confidence in each other and build on what we have working here. Eventually, it turns into a snowball and it keeps building up. I feel like we have a real culture here now and I love the way this team is going.”

Almost everything. The young offensive line that started so poorly has paved the way for New York to rush for 100 yards in seven straight games and eight of nine. The run game had a season-high 190 yards against the Seahawks. The defense has allowed less than 21 points in four consecutive games. The last time that happened was 2011 in six straight en route to a Super Bowl title.

For the second straight week, special teams gave up points. The Seahawks blocked a Riley Dixon punt for a safety. It was nearly a touchdown. The Bengals returned a kickoff a team-record 103 yards for a touchdown the week before, and nearly had a game-winning punt return late.

This has to be shared. Williams sacked Wilson 2 1/2 times and has a career-high 8 1/2. His previous best was seven as a second-year pro with the Jets in 2016. Defensive coordinator Pat Graham has transformed a bad defense in less than a year. He has to be in contention for a head coaching job.

After this win, no one.

Inside linebacker Blake Martinez left in the fourth quarter with a lower back injury. Jones has another week to heal his hamstring.

4 — The Giants are riding their longest winning streak since taking six in a row in 2016. That was the only year New York made the playoffs since the '11 season.

Just keep playing the same way. The schedule is tough the next three weeks. New York has consecutive home games against Arizona (6-6) and Cleveland (9-3), followed by a game at Baltimore (6-5) on Dec. 27. The season ends with a home game against Dallas (3-8).