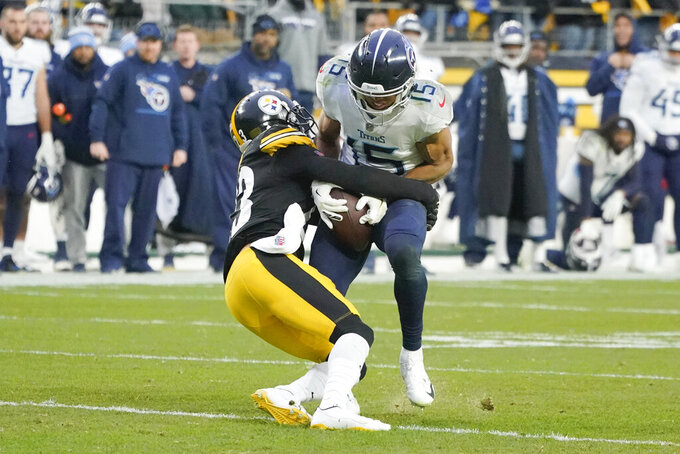 Pittsburgh Steelers cornerback Joe Haden (23) stops Tennessee Titans wide receiver Nick Westbrook-Ikhine (15) after Westbrook-Ikhine made a catch on fourth down near the end of the second half of an NFL football game, Sunday, Dec. 19, 2021, in Pittsburgh. The play was ruled that Westbrook-Ikhine was stopped short of the line of gain and was upheld on review, giving the Steelers the ball. (AP Photo/Gene J. Puskar)

Las Vegas at Cleveland, 5 p.m. EST. The game was originally scheduled for Saturday, but was pushed to Monday night as a result of a spike in COVID-19 cases. The Browns (7-6) had 24 players, including quarterback Baker Mayfield and 11 other starters on the COVID-19 list after the virus swept through the team in recent days and threatened to derail Cleveland’s playoff hopes. The NFL’s decision to relax some testing policies could result in the Browns getting back some key players by Monday. Meanwhile, the Raiders (6-7) are coming off a 48-9 drubbing at Kansas City, their fifth loss in six games following a 5-2 start to the season.

Minnesota at Chicago, 8:15 EST. The Vikings (6-7) will try to steady themselves coming off a near epic collapse when they visit the struggling Bears (4-9). Minnesota hung on to beat Pittsburgh 36-28 on a Thursday night after nearly blowing a 29-0 lead. The Vikings have four losses by three points or less. Chicago has lost seven of eight.

Seattle at Los Angeles Rams, 7 p.m. EST. The game was postponed from Sunday after at least 27 Rams players spent time on the reserve/COVID-19 list. That list stood at 21 Saturday after two additions and six roster reinstatements, including receiver Odell Beckham Jr. and running back Darrell Henderson. The Rams (9-4) will be playing two games in six days, including their trip to Minnesota on Dec. 26. The Seahawks (5-8) placed six more players on the reserve/COVID-19 list, including starting cornerback D.J. Reed and starting right tackle Brandon Shell on Sunday. They joined wide receiver Tyler Lockett and running back Alex Collins, who were placed on the list Thursday.

Washington at Philadelphia, 7 p.m. EST. Another game that was rescheduled from Sunday because of COVID-19 issues. Washington's starting quarterback was uncertain with Taylor Heinicke on the COVID-19 list and backup Kyle Allen in coronavirus protocol. Practice squad QB Kyle Shurmur would be in line to start for Washington (6-7) if neither Heinicke nor Allen is available. The Eagles (6-7) are coming off a bye-week break and also have quarterback questions with Jalen Hurts (ankle) splitting practice reps with Gardner Minshew.

— Aaron Rodgers, Packers, had three touchdown passes — tying Brett Favre on Green Bay’s career list — and the Packers became the first team this season to clinch a division title, wrapping up the NFC North with a 31-30 win over Baltimore.

— Duke Johnson, Dolphins, rushed for 107 yards and a career-best two touchdowns in Miami's 31-24 win over the New York Jets.

— Devin Singletary, Bills, ran for a season-high 86 yards in Buffalo's 31-14 victory over Carolina.

— Brandin Cooks, Texans, had seven receptions for 102 yards and two scores in Houston's 30-16 victory at Jacksonville.

— Christian Kirk, Cardinals, caught nine passes for 94 yards and a touchdown in Arizona's 30-12 loss at Detroit.

— Tremon Smith, Texans, returned a kickoff 98 yards for a touchdown in Houston's 30-16 victory over Jacksonville. It was the Texans' first score on a kickoff return since 2009, the longest drought in the NFL.

— Joe Haden, Steelers, stuffed Tennessee wide receiver Nick Westbrook-Ikhine inches short of a first down at the Pittsburgh 10 in the final seconds, sealing a 19-13 victory. Haden, who earlier had a fumble recovery, missed four games with a foot injury.

— DeMarcus Lawrence, Cowboys, forced a fumble and made two other big plays that led to 15 points in Dallas' 21-6 win over the New York Giants.

— Cameron Jordan, Saints, had two sacks to give him 100 1/2 for his career, helping New Orleans stymie Tom Brady and Tampa Bay 9-0.

— Brandin Echols, Jets, returned an interception 20 yards for a touchdown in New York's 31-24 loss at Miami.

Pittsburgh's Ben Roethlisberger finished 16 of 25 for 148 yards in the Steelers' 19-14 win over Tennessee to move past 2004 NFL draft classmate Philip Rivers into fifth place on the NFL’s career yards passing list. ... Green Bay's Aaron Rodgers threw three TD passes in the Packers' 31-30 win at Baltimore, tying him with Brett Favre on the franchise's career list with 442. ... Pittsburgh's T.J. Watt had 1 1/2 sacks against the Titans, giving him a franchise-record 17 1/2 on the season. ... Evan McPherson kicked a Bengals franchise-record 58-yard field goal in Cincinnati's 15-10 win at Denver. The kick cleared the crossbar just as the first half expired, sending teammates onto the field to celebrate the rookie’s record, which surpassed Randy Bullock’s 57-yard field goal on Dec. 22, 2019, at Miami. ... Green Bay's Matt LaFleur became the third coach since 1970 to win at least 11 games in each of his first three seasons, joining San Francisco's Jim Harbaugh (2011-13) and Indianapolis' Chuck Pagano (2012-14).

Cam Newton has lost 12 consecutive starts for Carolina, a skid that began before he spent last season with New England. Newton re-signed with the Panthers last month and hasn’t led Carolina to victory since a 42-28 win against Tampa Bay on Nov. 4, 2018. The Panthers lost 31-14 at Buffalo on Sunday. ... Miami beat the New York Jets 31-24 to sweep the series between the AFC East rivals for the second consecutive season, the first time that has happened since 1996 and 1997. ... Dallas rookie linebacker Micah Parsons had his sack streak stopped at six games after not getting one in a 21-6 win over the New York Giants. ... Houston's 30-16 win at Jacksonville was the Texans' eighth straight victory against the Jaguars. They also swept the AFC South series for the ninth time in the last 11 years. ... San Francisco's Nick Bosa’s had his 15th sack of the season in the 49ers' 31-13 win over Atlanta, giving him sacks in six straight games. It's the longest streak for a 49ers player since Aldon Smith did it in seven straight games in 2012.

Green Bay became the first NFL team to earn a playoff berth, beating Baltimore 31-30 to win the NFC North title. It is the third straight division crown for Aaron Rodgers and the Packers, who have also won the NFC North in nine of the last 11 seasons.

Detroit's 30-12 victory over Arizona marked the third time since the 1970 merger that a team coming into a game with the NFL's worst record beat a team with the league's best mark (including tied records), with a minimum of eight games played each, according to NFL Research. The Lions entered 1-11-1, while the Cardinals were 10-3. The other two teams to lose to the squad with the worst record — the 1995 Cowboys (vs. Washington) and 2004 Patriots (vs. Miami) — went on to win the Super Bowl that season.

New Orleans’ 9-0 victory over Tampa Bay was the Saints' seventh straight time over the Buccaneers during the regular season — and fourth since Tom Brady left New England for Florida in 2020. The victory gave New Orleans a sweep of the season series between the NFC South rivals and boosted the Saints into playoff position. It also forced Tampa Bay to wait at least another week to clinch its first division crown since 2007. The Saints stymied the NFL’s No. 1 passing and scoring offense and ended Brady’s streak of 255 consecutive starts without being shut out.

The Miami Dolphins defeated the New York Jets 31-24 on Sunday to become the second team in NFL history to get to 7-7 after starting a season 1-7. The other team on that list: the Jets, in 1974. The season was only 14 weeks then, so that’s where New York's turnaround ended, and did so without a playoff berth.

Pittsburgh's Ben Roethlisberger ran back-to-back quarterback sneaks in the third quarter of the Steelers' 19-13 win over Tennessee, the second of which gave him his first rushing touchdown since a win at Jacksonville in 2018. Asked what he was thinking as he laid at the bottom of the pile, the 39-year-old Roethlisberger couldn’t help but crack a joke.

“I thought I broke the all-time Heinz rushing record, so I’m trying to take a moment for myself,” he said.

Tremon Smith returned a kickoff 98 yards for a touchdown, ending the longest drought in the NFL, to help the Houston Texans beat Jacksonville 30-16. Smith somehow escaped five defenders near the 30-yard line – Jaguars safety Rayshawn Jenkins broke his right ankle trying to make the tackle — before coasting the rest of the way. It was Houston’s first kickoff return for a score since Oct. 4, 2009.

Miami defensive lineman Christian Wilkins caught a touchdown pass early in the fourth quarter of the Dolphins' 31-24 win over the New York Jets on Sunday, juggling the ball before controlling it and then letting loose with a wild celebration.

The 6-foot-4, 310-pound defensive lineman leaped into the stands, then did “the worm” in the end zone as teammates danced around him.

“That was awesome,” said quarterback Tua Tagovailoa. “That was cool, cool to see him score.”

Broncos quarterback Teddy Bridgewater was taken to a hospital for a head injury after he was carted off the field in the third quarter of Denver’s 15-10 loss to Cincinnati. Bridgewater had movement in his extremities, and coach Vic Fangio said he’d be held overnight for observation but was expected to be OK. ... Carolina kicker Zane Gonzalez had to be helped off the field after injuring his quadriceps in warmups, leaving the Panthers without a placekicker in a 31-14 loss to the Buffalo Bills. ... New York Jets safety Elijah Riley was taken off the field on a backboard after being injured during the third quarter of a 31-24 loss to Miami. Riley injured his neck in a collision with teammate Kyle Phillips. ... Giants wide receiver Sterling Shepard is done for the season after tearing his left Achilles tendon late in a 21-6 loss to Dallas. ... Jacksonville safety Rayshawn Jenkins broke his right ankle trying to make a tackle on Tremon Smith’s 98-yard kickoff return for a touchdown in a 30-16 loss to Tennessee.

“They were hungrier than us. They played harder than us.” — Arizona quarterback Kyler Murray on Detroit, which beat the Cardinals 30-12.

“We’re the best defense.” — A blunt Trevon Diggs after picking up his league-high 10th interception of the season, one shy of the team record set by Everson Walls in 1981, in Dallas' 21-6 win over the New York Giants. The Cowboys had three interceptions and forced four turnovers for the third straight game.