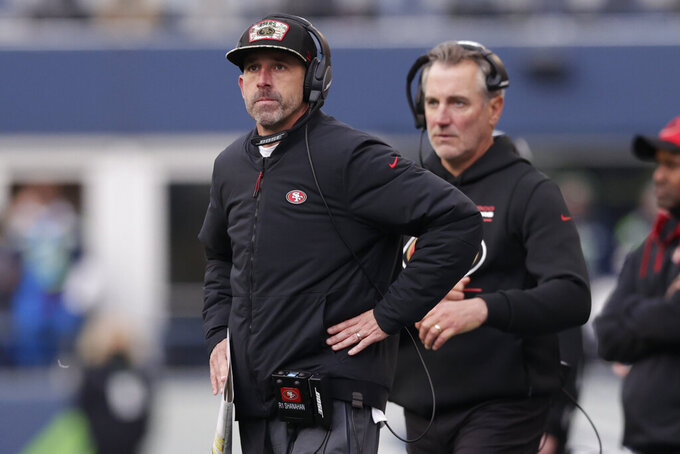 San Francisco 49ers Kyle Shanahan, left, stands on the sideline during the first half of an NFL football game against the Seattle Seahawks, Sunday, Dec. 5, 2021, in Seattle. (AP Photo/John Froschauer)

CINCINNATI (AP) — The Bengals and 49ers are both hanging on the edge of the playoff picture with little room for error left.

Cincinnati (7-5) and San Francisco (6-6) are both coming off loses and wasted opportunities to make a move in the chaotic playoff chase.

Cincinnati, which hasn't been to the postseason since 2015 and hasn't won a playoff game in three decades, has an AFC wild-card spot with several teams still on the bubble.

The Niners also have a wild-card slot, with several other teams in a position to make a move. They had moved into the playoff position with a three-game win streak but couldn't extend it, thanks to a series of special teams blunders, two interceptions from Jimmy Garoppolo and then the inability to finish off a final 95-yard drive in a 30-23 loss to Seattle last Sunday,

The Bengals had won two straight before key injuries and mistakes took their toll in a 41-22 loss to the Los Angeles Chargers that left quarterback Joe Burrow nursing a sore little finger on his throwing hand.

“I think broadly you can just look around the league and see the balance this year, and that contributes to us and everybody going through the exact same thing,” Cincinnati coach Zac Taylor said.

“We’re worried about us, first and foremost. But you can also see there’s really good balance in the league right now, and it leads to being difficult to keep the momentum, and it takes a lot of focus and poise.”

Burrow dislocated his finger on a strip-sack fumble on Cincinnati's first possession last week. It popped back in place, and Burrow played the rest of the game with it swollen and sore. He said it didn't affect this passes. He was limited in practice this week, but fully expects to play Sunday.

For two straight games the 49ers’ special teams have been far from special. The unit has given up touchdowns on a kick return and fake punt, turned the ball over once, missed a couple of kicks and allowed a few other big returns.

The Niners survived the problems two weeks ago against Minnesota when they managed to overcome Kene Nwangwu’s 99-yard kickoff return and Robbie Gould’s missed field goal.

That wasn’t the case last week when Seattle scored on a fake punt, Travis Benjamin fumbled away a kickoff, Gould missed an extra point and another long kick return led to a TD drive in the Seahawks win.

“We’ve had two weeks that are not up to our standard in a row, and we can’t have that happen if we want to go where we want to go,” special teams coordinator Richard Hightower said.

For much of the season, Cincinnati was one of the healthiest teams in the AFC. Suddenly, not so much. Their best linebacker, Logan Wilson, was carted off last week with a shoulder injury and is expected to be out at least a couple of weeks. Starting offensive linemen Riley Reiff and Trey Hopkins both suffered ankle injuries in the Nov. 28 blowout of the Steelers, and cornerback Chidobe Awuzie (foot) suffered a foot injury last Sunday. Receiver Tee Higgins is also dealing with an ankle injury.

They join the Niners in trying to manage a rash of injuries, including running back Trenton Cannon, who sustained a concussion on a scary hit against Seattle that led to him being taken off by ambulance. He is questionable for Sunday.

San Francisco nose tackle D.J. Jones usually flies under the radar as a space-eater in the middle of the defense who helps his teammates make plays. But Jones had a big game of his own last week when he had seven tackles, including two behind the line of scrimmage, a forced fumble and three quarterback pressures.

“I think D.J. played one of his best games vs. Seattle,” coach Kyle Shanahan said. “I think D.J.‘s always played at a pretty high level, I think he’s stayed healthy this year. When D.J.’s out there, he’s pretty much always the same guy.”