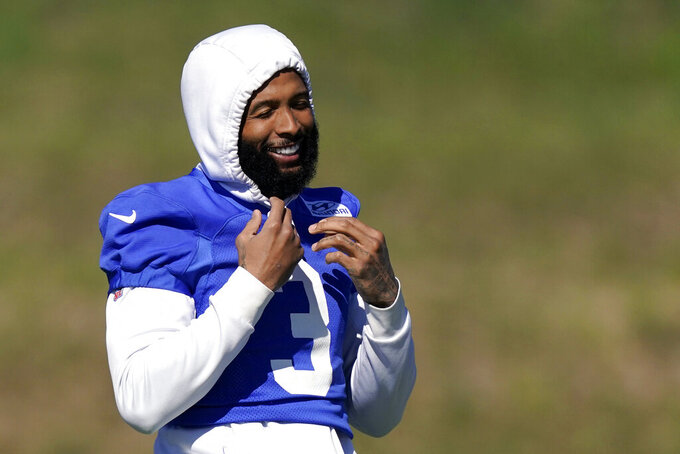 Beckham sounds and looks like a different person in Los Angeles, where the Rams will face Cincinnati in the Super Bowl on Sunday. Fresh start? Maybe. Fresh perspective? No doubt.

“You definitely feel free,” Beckham said during a virtual media session this week. “When you erase, eliminate all of that, you just realize you were carrying other people’s problems, things that they may need to work on with themselves, like you’re carrying all that energy.

“It just was weighing me down. I feel like it could have been the reason why I got injured time after time after time. There was a part of me that wanted to prove people wrong more than I just wanted to be myself and prove myself right. So I definitely feel a weight lifted off my shoulders, just less energy I’m carrying.”

The mercurial receiver, who battled injuries the past few seasons, was waived by Cleveland in November after a 2½-year relationship that turned rocky near the end. Both sides clearly wanted out, Beckham because he felt he wasn’t being featured in the offense, and the Browns because they were getting more headaches than highlights in return for $7.25 million a year.

On Friday, Beckham addressed his exit from Cleveland by saying: “One of the biggest regrets that I have is about the way that things ended. There really was no closure. It just happened so abrupt. So a lot of things were out of my control.”

No one knew exactly how Beckham would fit in with such a star-studded roster. Some thought he would be a distraction, others even labeled him a troublemaker. Instead, by all accounts, he’s been a model teammate.

Beckham caught 27 passes for 305 yards and five touchdowns in eight regular-season games with the Rams, providing a much-needed fill-in after Woods tore a ligament in his left knee in practice a day after Beckham’s arrival.

Beckham has been even better in the playoffs, with 19 receptions for 236 yards and a score in three victories. He had nine catches for 113 yards against San Francisco in the NFC championship game two weeks ago.

He takes no solace in proving anybody — or just about everybody — wrong.

“A younger me definitely would have,” he said. “But I just feel like I’ve come so far. I really know who I am. I know myself. I know what I can bring. I know all of the stories and all that. … I’m just happy that I’m in the position I am in, playing in a Super Bowl and hopefully being able to give one last effort, everything I have for this team to bring home that trophy.”

Beckham once thought playing in Cleveland would give him a good chance of getting to the Super Bowl. But his relationship with the city soured, in part because of injuries that limited him to two 100-yard performances in 29 games. It got so strained near the end of his time there that his father, Odell Beckham Sr., posted a social media video of plays in which Browns quarterback Baker Mayfield didn’t throw the ball to his son.

Beckham said he didn’t know about the video until he woke up early that afternoon. The video, which was released on Nov. 2, was the final straw as the Browns and Beckham’s agent spent a couple days working through details of Beckham’s release.

“I didn’t know about the video or when it was posted or anything of that matter,” he said. “By the time I woke up, everything had already transpired. That’s kind of where it all started and ended.”

Beckham said he still has many friends on the Browns, including wide receiver and longtime buddy Jarvis Landry, who will be at Sunday's game. Beckham admitted he has not talked to Mayfield since he was released, but that it might happen eventually.

Beckham hinted at mistakes he made but stopped short of taking any blame for how things unfolded in Ohio or with the New York Giants, who drafted him 12th overall in 2014.

“I always talk about living life without regrets,” he said. “So for me it’s been about the lessons and how do you learn from those lessons to benefit you in the future? … There have been a lot of moments in my career that I can look back on now and ask myself how could I have handled that better? Just know that there is a lot of moments where I look back as a 29-year-old and reflect like how could I have been better in this situation?

“I wish I could give you one, but I don’t want to throw myself under the bus right now.”

Beckham remains one of the NFL's most popular players, fame that skyrocketed after a spectacular one-handed touchdown catch against Dallas during his rookie season. He has 15.2 million followers on Instagram and 4.2 million on Twitter. Hall of Fame receiver Michael Irvin as well as Jarvis Landry – they were college teammates at LSU and reunited with the Browns — dropped into his Zoom session to shower him with praise for showing such resilience.

Fans across the country are on “baby watch” for Beckham and his girlfriend, singer/fitness trainer Lauren Wood. Their first child is due any day now. Beckham doesn’t even want to talk about the possibility of Wood giving birth during the big game. He doesn’t want “to put the energy in the air.” It’s a lesson he’s embraced since that move west.