Panthers and Giants meet in game between struggling teams 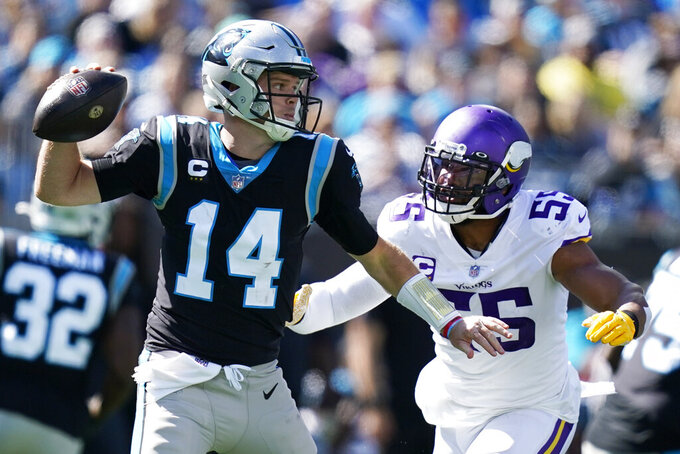 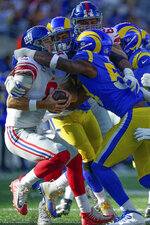 OPENING LINE: Panthers by 3, according to FanDuel SportsBook.

TURNOVER DIFFERENTIAL: Panthers minus-4; Giants minus-1.

PANTHERS PLAYER TO WATCH: RB Chuba Hubbard. The rookie from Oklahoma State is expected to have a major role on Sunday after coach Matt Rhule promised the Panthers were going to recommit to the running game. Hubbard has rushed for 219 yards on 52 carries and one touchdown in three starts in place of the injured Christian McCaffrey.

GIANTS PLAYER TO WATCH: WR Sterling Shepard. The veteran returned to the lineup after missing two games with a hamstring injury and had 10 catches for 76 yards. It was his best game total since he had 10 against New Orleans in 2018.

KEY MATCHUP: Panthers QB Sam Darnold vs. Giants secondary. Darnold has turned the ball over seven times in the last three games, six on interceptions. He faces a Giants defense that is allowed 264.2 yards passing per game. The big question could be if Carolina’s offensive line gives Darnold time. He has been sacked 12 times in the past three games.

SERIES NOTES: The Panthers have won four of the six road games against New York. The most impressive was a 23-0 victory in January 2006 in a wild-card playoff game. It marked the first time Tom Coughlin took the Giants to the playoffs. Carolina made it to the NFC title game, losing to Seattle. The Panthers' last two wins over New York came on field goals by current Giants placekicker Graham Gano, including a career-long 63-yarder in the 33-31 result in 2018.

STATS AND STUFF: The Panthers are 0-2 against the NFC East with losses to the Eagles and Cowboys. ... The Panthers had eight drops in last week’s game, including three each by WRs D.J. Moore and Robby Anderson. ... Anderson has been targeted 40 times but only has 15 receptions for 190 yards and two touchdowns after signing a $37.5 million contract extension. ... The Carolina defense had 14 sacks in the first three games. It has had two in the past three. ... Carolina had the NFL's No. 1 pass defense before allowing Vikings QB Kirk Cousins to throw for 373 yards and three TDs. The Panthers dropped to No. 2 this week. ... The Panthers have been outscored 48-14 in the third quarter. ... This will be the 17th game out of the last 23 McCaffrey will have missed because of injuries. ... New York is 0-3 at home. ... The offensive line, which did not allow a sack in the previous two games, gave up four against the Rams, including one that led to a fumble recovery deep in New York territory. ... QB Daniel Jones, who had one interception in the first five games, threw three against the Rams. ... DL Leonard Williams doubled his sack total with 1 1/2 last week. ... Second-year S Xavier McKinney had a career-best two interceptions last week. ...LB Tae Crowder is looking for his third straight game at home with 10-plus tackles. ... CB James Bradberry has defended at least one pass in each of the first six games. The only other cornerback to do that in 2021 is Trevon Diggs of Dallas.

FANTASY TIP: Quarterbacks and receivers have eaten up the Giants and their No. 27 ranked defense all season. Surprise picks: In their return to MetLife, the former Jets step up, so use Darnold and Anderson.

By Maryclaire Dale an hour ago
By W.g. Ramirez 2 hrs ago
By Noah Trister 9 hrs ago
By Kyle Hightower 10 hrs ago
By Steve Reed 13 hrs ago