Patriots, playing for seeding, head out for Dolphins' finale 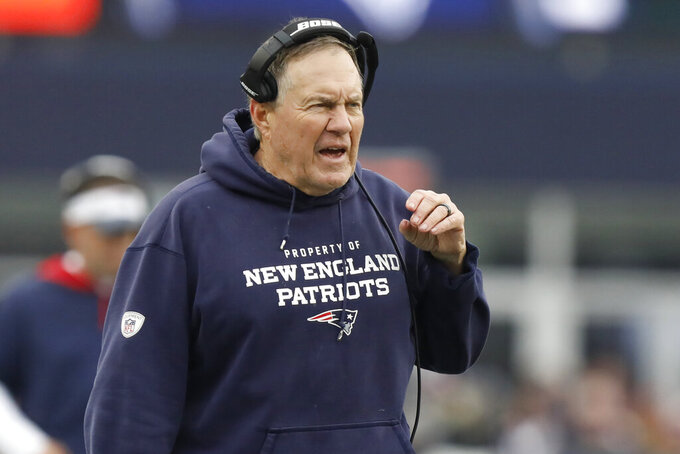 New England Patriots head coach Bill Belichick calls to his players during the first half of an NFL football game against the Jacksonville Jaguars, Sunday, Jan. 2, 2022, in Foxborough, Mass. (AP Photo/Paul Connors)

MIAMI GARDENS, Fla. (AP) — When the NFL regular season draws to a close on Sunday night, the New England Patriots might end up as the No. 1 seed for the AFC playoffs.

They also could be second. Or third.

Or even fourth, fifth, sixth or seventh.

Every possible seeding scenario — some far more plausible than others — is on the table for the Patriots (10-6) heading into their regular season finale on the road Sunday afternoon against the Miami Dolphins (8-8).

A loss to the Dolphins means the Patriots will open the playoffs seeded somewhere between No. 5 and No. 7 and on the road, no matter what else happens around the AFC on Sunday. A win opens tons of doors, potentially all the way to that No. 1 seed and the lone first-round bye in the AFC.

“Miami is a good football team and we know them well, they know us well,” Patriots coach Bill Belichick said. “We haven’t played each other all year, but overall, there’s a lot of familiarity between the two teams. It’ll be a good opportunity for us to try and hone in on our fundamentals, our execution, and our communication. Worry about next week next week.”

For the Dolphins, the prizes at stake Sunday include finishing with a second consecutive winning record and sweeping the Patriots; Miami prevailed at New England back in Week 1.

There are 120 coaches who have gone up against Belichick in his 22 seasons with the Patriots. And of those, four — Dave Wannstedt, Mike Shanahan, Tom Coughlin and Tony Dungy — are the only ones in that span to have beaten Belichick three consecutive times.

“With Bill, his consistency is something maybe people don’t talk about,” said Flores, who is wrapping his third season as Dolphins coach. “You hear the same message really on a daily basis. It’s been a while since I’ve been out of there now. I’ve certainly grown more of an appreciation for my time there and the things I’ve learned. A lot of those things, I try to apply here.”

No team — regardless of who’s coaching — has had better than a three-game winning streak against New England in Belichick’s 22 seasons there, either. Miami won its first three meetings against the Belichick-led Patriots, and Denver, Indianapolis, the New York Giants and the New York Jets have also had three-game win streaks against New England in that span.

A few clubs tried to join that list this season. They all failed in what basically became a Belichick revenge tour. Buffalo, Carolina, Houston and Tennessee all had won back-to-back games against New England entering matchups this season; the Patriots went 4-0 in those ensuing contests by a combined score of 99-51.

The Dolphins now get their shot, against a New England team that has kept finding ways to get better.

“I tried to just learn along the way,” Patriots quarterback Mac Jones said. “Each week, starting with Week 1, you try things and try to adjust them to find out what works.”

One more nugget on the Flores vs. Belichick matchup: He would become the first former Patriots assistant to beat his old boss four times, and just the seventh coach to beat the Patriots at least four times in the Belichick era.

Patriots RB Damien Harris had his season-opening 100-yard rushing game against Miami marred by a fourth-quarter fumble that helped cement the Dolphins’ 17-16 victory.

He vowed not to let the play define his season and he’s done that, leading the Patriots with five 100-yard games, 892 total yards rushing and 14 touchdowns. It puts him in striking distance of becoming New England’s first 1,000-yard rusher since LeGarrette Blount in 2016.

“I think Jaylen has done a good job,” Flores said. “Look, he’s gotten better every day. He works hard. It’s important to him.”

While the potential unavailability of players because of COVID-19 could certainly factor in, Patriots WR Kristian Wilkerson’s two-touchdown performance in New England’s 50-10 win over Jacksonville last week appears to have played a role in Belichick doing something he hasn’t done all season.

“He works hard in practice and has improved a lot,” Belichick said of Wilkerson. “That’s always a good thing for players to get an opportunity, be able to capitalize on it, and show their teammates and the team that they can contribute. It’s kind of how it goes.”

The quarterback matchup — Jones vs. Miami’s Tua Tagovailoa — may have Alabama fans feeling a bit conflicted, since both just won national championships for the Crimson Tide.

“I think it’s more just the Patriots versus the Dolphins,” Jones said. “Tua’s a great quarterback and he’s done great stuff throughout his whole career. When we were together, he was a great teammate and a great player.”