Patriots trade up in 2nd round, select Barmore from Alabama 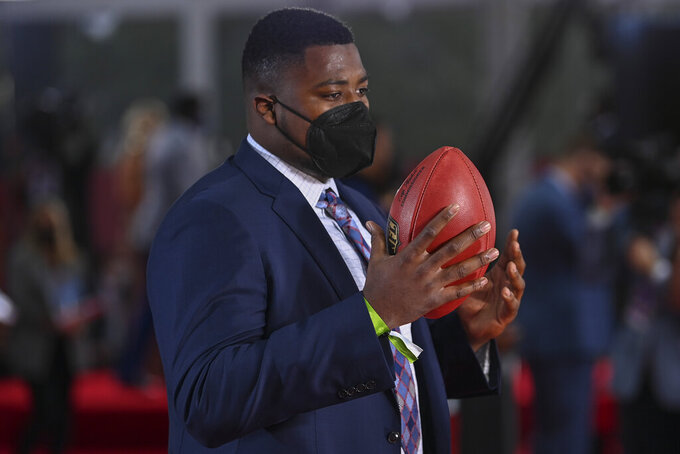 Alabama defensive lineman Christian Barmore holds a football as he appears on the Red Carpet at the Rock & Roll Hall of Fame before the NFL football draft, Thursday, April 29, 2021, in Cleveland. (AP Photo/David Dermer, Pool)

BOSTON (AP) — Trying to rebound from the worst season since his first in New England, Bill Belichick looked to old friend Nick Saban for top players in this year's draft.

The Patriots traded up eight spots in the second round Friday night to select Alabama defensive tackle Christian Barmore with the 38th pick of the NFL draft.

The Patriots swapped their second-round pick (46th overall) and two fourth rounders (122 and 139) to Cincinnati for the chance to get Barmore.

A night after standing pat with the No. 15 pick and taking another Alabama player — quarterback Mac Jones in their search for a long-term replacement for Tom Brady — New England looked to build its defense as it attempts to retool following a disappointing season.

“Certainly, Alabama always has a very high level of football,” Belichick said. “They're well-coached and well-trained.”

The Patriots took Oklahoma defensive end Ronnie Perkins with a compensatory third-round pick, 96th overall, that they were awarded because Brady won a Super Bowl with Tampa Bay after leaving as a free agent.

“It was my favorite team growing up,” said Barmore, who will also join fellow ‘Bama standouts linebacker Dont'a Hightower and running back Damien Harris.

Hightower, a three-time Super Bowl champ and twice a national champion with Alabama, was drafted in the first round by New England in 2012. Harris was picked in the third round in 2019.

“My favorite college team was Alabama, so I love dominance,” Barmore said. “It's like the same program, just in the NFL.”

Both of the Patriots' first two picks played for Saban, a longtime friend and former coaching colleague of Belichick.

It's the sixth time since 2000 that the Patriots drafted back-to-back players from the same school.

“They're winners. I love winners," Barmore said when asked why the six-time Super Bowl champs were his favorite team.

Perkins, listed at 6-foot-3, 253 pounds, was a two-time second-team All-Big 12 selection. In his sophomore year, he started 13 games before being suspended for the 2019 Peach Bowl due to a failed drug test. That suspension carried over to the first five games in 2020.

“I was going through some off-the-field things that I really had to get figured out,” Perkins said of the suspension. “It kind of affected me on the field. ... Becoming an NFL player, learning not to make that mistake again.”

“We do background work on every player,” Belichick said. “We're comfortable with Ron.”

Barmore, listed at 6-foot-5, 310 pounds, played two seasons for the national champion Crimson Tide before declaring for the NFL draft. He was the defensive MVP of the title game last season after being named to the SEC All-Freshman team his first year. He was also All-SEC last season.

After finishing 7-9, the team's first losing record since Belichick’s initial season (5-11) in 2000, and missing the playoffs for the first time since 2008, New England spent nearly $160 million in guaranteed money in the opening days of free agency, most of it on the offensive side of the ball.

The Patriots were stripped of their own third-round pick as punishment for their television crew filming the field and sideline during a Dec. 8, 2019, game between Cincinnati and Cleveland. They were also fined $1.1 million.

New England has one pick in the fourth round (No. 120 overall), one in the fifth (177), two sixth (188 and 197) and one seventh (242) on Saturday. The Patriots' needs are in the defensive secondary or help at wide receiver or linebacker.