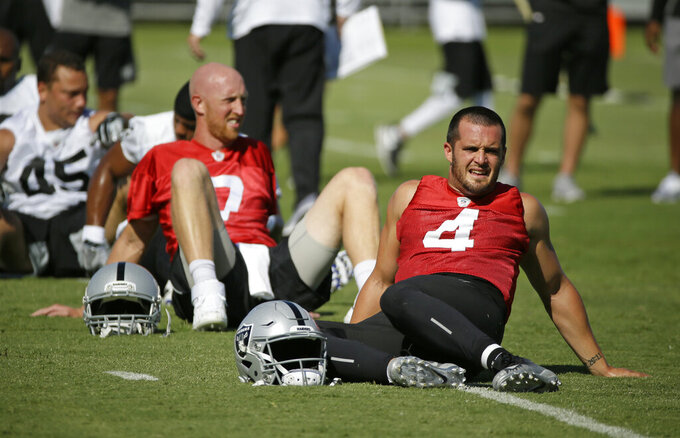 NAPA, Calif. (AP) — As complex as his offense can be, Raiders coach Jon Gruden still gives quarterbacks the liberty to make whatever changes they want to make at the line of scrimmage.

"But you have to earn your freedom," Gruden said Friday. "You have to prove that you can recognize, you can communicate and you can execute."

Nate Peterman and Mike Glennon have yet to get a full green light from Gruden but they are making strides as they battle for the backup quarterback job behind Derek Carr.

The two have spent the past week splitting reps with the Raiders' second-team offense and are almost certain to get the bulk of playing time once the preseason games begin next week. For obvious reason Carr isn't likely to play much if at all, although Gruden has yet to disclose his plans.

For the two backups, the preseason presents an opportunity to get their respective careers back on track.

Peterman was a fifth-round pick by Buffalo in 2017 and quickly rose up the depth chart to become the Bills starter in Week 1 last year before a disastrous performance in a 47-3 loss to the Baltimore Ravens landed him on the bench.

Like his stint as the Bills starter, Peterman's stay in Buffalo was brief and disappointing. He lost three of the four games he started over two years and had four times as many interceptions (12) as he did touchdown passes (3).

The Bills cut Peterman late last season and he was signed to Oakland's practice squad in December. He was re-signed in January and spent the offseason studying the nuances of Gruden's offense.

"I think I've made huge strides from OTAs to now," Peterman said. "I love it. (Gruden) empowers the quarterback and then he revolves practice around the quarterback, too. It's probably the most prepared I feel like I've been, especially at this stage, week two of camp."

Gruden raised a few eyebrows around the NFL earlier this week when he heaped glowing praise on Peterman and said the third-year quarterback was growing on him.

"I know he's had some nightmare performances in the NFL, but when you watch the film you can see why. It's not all his fault," Gruden said. "He's got some talent, he's got some athleticism, he's got some experience. Here's an opening day starter for the Buffalo Bills last year. I take that very serious. And he's smart. He's done a good job, he's been consistent and he's starting to get his confidence back."

"There's pros and cons," Glennon said of his journeyman background. "The pros are you're used to it. You adapt, you learn quicker just because it's almost like every year. The negative side of it is sometimes coaches teach things a little different. That's the biggest adjustment, learning the new lingo and understanding what the coach wants versus maybe what a previous coach wanted."

Like Peterman, Glennon has embraced Gruden's philosophy for quarterbacks and their freedom to alter plays before the snap.

"That's more than I'm used to," Glennon said. "Usually it's call the play and run it. You might have one or two options. His is, I don't want to say it's open-ended but there's a lot more freedom at the line of scrimmage and he expects you to get the offense in the right play."

Notes: One day after posting a picture of his severely blistered feet on social media, wide receiver Antonio Brown was held out of practice again. Brown has not yet participated in a full practice, leading to some frustration for his coach. "I think we're all disappointed," Gruden said. "We think he's disappointed. We'd like to get the party started. We'd like to get him out here. He's a big part of this team." . Defensive tackle Gabe Wright will be out indefinitely after suffering a knee injury earlier this week.