Plenty of blame to pass around in Jets' season-opening loss 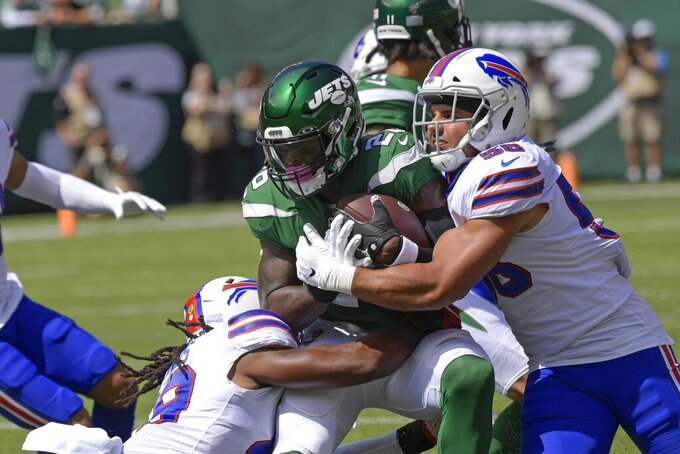 It was clear in the coach's voice Monday, and he also made it apparent he's not going to sugarcoat things. No one was above criticism or blame for the 17-16 defeat in which New York blew a 16-point lead against Buffalo.

Not Sam Darnold. Not the receiving corps. Not the secondary. Not Gase himself.

In a nearly 13-minute conference call with reporters Monday, Gase put his entire team on notice by pointing out breakdowns and shortcomings of position groups without naming individual players.

"We made some mistakes," Gase said of the offense, "and they were fatal for us."

Darnold and the offense put up only 223 total yards against a stout Bills defense, and managed only 17 first downs. Nine of New York's points came from the defense, on an interception return for a touchdown by C.J. Mosley, and a safety by Brian Poole and Jordan Jenkins.

Le'Veon Bell looked anything but rusty in his first game in nearly 20 months, catching a touchdown pass and a 2-point conversion. But Darnold finished a mediocre 28 of 41 for 175 yards and the TD to Bell.

The offensive line struggled at times, with center Ryan Kalil playing with Darnold for the first time since coming out of retirement last month. Kalil acknowledged he made some mistakes, and the quarterback didn't get consistent protection overall.

"I would say that some of it was the O-line," Gase said, "but I would say if we read the coverages correctly with the receivers, some of that isn't a problem."

There were plenty of other issues, including the continued kicking woes and the meltdown of the defense in the fourth quarter.

Before leaving in the fourth quarter with a groin injury, Mosley was the force the Jets expected. He had the pick-6 and a fumble recovery while quarterbacking the defense.

Well, this could be a lengthy list, but the cornerback spot is a good one with which to start.

Both Trumaine Johnson and Darryl Roberts struggled, and they have Cleveland's Odell Beckham Jr. and Jarvis Landry to look forward to next Monday night.

"I feel like we have a slight room for improvement," Gase said. "I will say that nicely."

There was no mistaking the kicking game needs an upgrade, especially after Kaare Vedvik missed an extra point and a 45-yard field goal try. The Jets will have some kickers at the facility Tuesday and it would be no surprise if they have someone new teeing it up against the Browns.

"What do you want me to do?" Gase said. "We haven't performed well. We are going to try to figure out a way to fix it, that's what it is."

Jamison Crowder showed he can be a reliable target for Darnold by catching 14 passes in his Jets debut — although he gained only 99 yards.

The defense as a whole sputtered when it mattered most, in the fourth quarter — particularly when Mosley left the game.

Gregg Williams' unit allowed no points with Mosley on the field, but gave up a field goal two plays after he left, and 170 yards and 14 points in the last three series without him.

"We didn't handle the fact that we lost our middle linebacker very well, and that was something that we addressed today," Gase said. "Basically we need to understand when we lose somebody, the next guy has to step up. We can't have any loss of energy, we can't lose our mind."

Mosley (groin) and rookie defensive tackle Quinnen Williams (ankle sprain) were having MRIs, and Gase said both were "trending" toward not practicing Wednesday. He declined to speculate beyond that.

4 — As in the stunningly low number of catches Robby Anderson (three for 23 yards) and Quincy Enunwa (one for minus-4) combined for against the Bills.

Gase doesn't think the loss will carry over into next week — or beyond.

"I see the look in these guys' eyes," Gase said, "the way that they felt after the game, the way they came in here today, the way they have been working so far today as far as the run and lift and their meetings. That one stung everybody.

"Any time you lose a close game like that, it hurts."