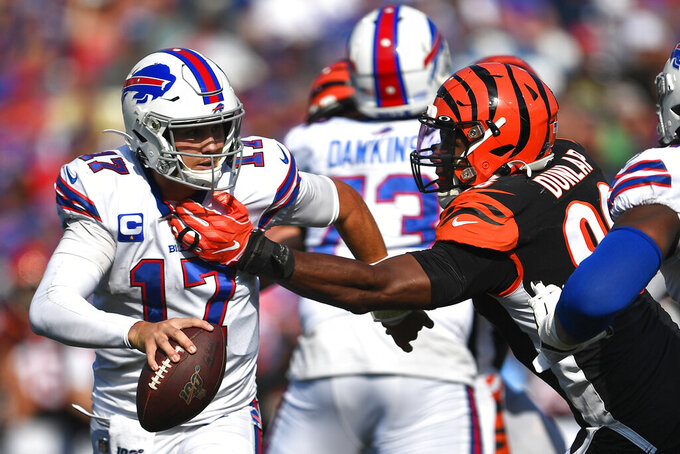 ORCHARD PARK, N.Y. (AP) — Josh Allen vows he's going to be more responsible with the football. And this time the Buffalo Bills' second-year quarterback says he really, really means it.

Allen was once again apologizing for an interception off an ill-advised pass which nearly cost the Bills a chance to get off to their first 3-0 start since 2011. They managed a 21-17 victory over winless Cincinnati on Sunday.

"I know it has happened a couple of times, but it's just one of those things that it's got to be put through my head it can't happen," Allen said. "I've learned from it. And I can truly say that it's not going to happen again."

The Bills might not have squandered a 14-0 third-quarter lead and gotten in a position to have to overcome a three-point deficit in the final minutes if not for Allen's momentum-turning unforced error. Pedaling backward to avoid being sacked, Allen's awkward, off-balance pass intended for Cole Beasley was easily picked off by Darius Phillips.

"You can't throw the ball over the middle of the defense like that," coach Sean McDermott said.

It occurred one week after Allen drew praise for throwing the ball away rather than risk an interception in the red zone with Buffalo up seven in an eventual 28-14 win over the New York Giants.

Against Cincinnati, Allen wasn't the only one coughing up the ball. Running back T.J. Yeldon lost a fumble at the Bengals 11 in the second quarter.

The issue of taking care of the ball isn't new for Allen.

He was intercepted several times on similar plays during his rookie season. It happened again during a preseason game at Detroit. In the season opener, Allen was particularly careless in losing a fumble — one of his four turnovers in the first half — of a 17-16 win at the New York Jets.

Against the Bengals, Allen was fortunate he didn't turn over the ball on two other instances.

He fumbled during a scramble deep in Buffalo's end only to have officials rule the ball was recovered out of bounds. Allen also lobbed a deep pass off his back foot intended for tight end Tommy Sweeney in the end zone, only to have Dre Kirkpatrick break it up.

On the bright side, Allen did rally the Bills back for his second winning drive of the season and fifth of his career.

And yet, the buzz Buffalo has generated for being one of the NFL's eight undefeated teams (including Detroit, 2-0-1) doesn't entirely mask signs of inconsistency of a team whose first three opponents have combined to go 1-8.

A better gauge of how good the Bills are comes Sunday, when they host AFC East rival New England (3-0) — an opponent Buffalo has defeated just five times since Bill Belichick took over as coach in 2000.

Buffalo's defenders have been adept in getting their hands on pass attempts over the middle. That included Tre'Davious White's game-sealing interception at Buffalo's 10, which bounced in his hands after Dalton's pass was deflected by safety Micah Hyde.

The Bills have yet to prevent an opponent from scoring a touchdown on four drives inside Buffalo's 20.

Rookie tight end Dawson Knox began delivering on the faith the Bills placed in trading up to draft him in the third round. The Mississippi product scored on a 1-yard catch — his first touchdown since junior high school. And then there was Knox's rugged, tackle-shedding 49-yard romp up the left sideline that set up Frank Gore's go-ahead touchdown.

Yeldon, the offseason free-agent addition, nearly lost his chance to make the active roster after losing a fumble in the red zone during Buffalo's preseason opener against Indianapolis. His fumble against the Bengals came in his first game as Gore's primary backup with rookie Devin Singletary sidelined by a left hamstring injury.

Backup defensive tackle Harrison Phillips will miss the rest of the season after tearing a knee ligament. McDermott had no update on the status of offensive guard Jon Feliciano, who hurt his neck in the first quarter.

30 — The Bills hold the NFL's longest active streak in having not allowed a completion of 50-plus yards, dating to Dalton hitting A.J. Green for a 77-yard touchdown on Oct. 8, 2017.

The Bills brace for Tom Brady and Co. coming to town. Brady has a 30-3 career record against the Bills, an NFL record for most career wins by a quarterback against any opponent. His 15 wins alone at Orchard Park, New York, rank fourth among all quarterbacks, including Buffalo's, and three shy of former Patriots and Bills starter Drew Bledsoe's 18.