Raiders after latest lopsided loss: 'It was embarrassing' 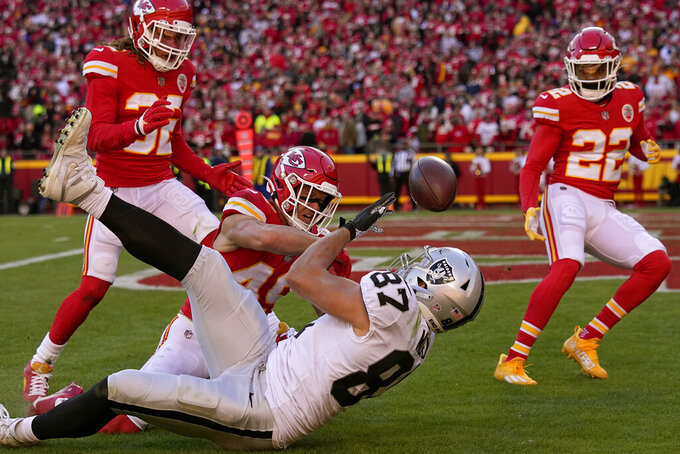 Josh Jacobs took the handoff on the opening play from scrimmage, got stripped and watched Mike Hughes return the fumble for a touchdown.

The game only got worse from there for Las Vegas as the Raiders lost 48-9 to the Kansas City Chiefs on Sunday for their second-most lopsided regular-season loss in the Super Bowl era.

“The mood is embarrassed," linebacker K.J. Wright said. "Just the way we came out. We had a really good week of practice. One of the best I’ve seen. We were focused after the loss to Washington. We knew that we were trying to make this playoff run and for us to come out and put up the performance we did, it was embarrassing to me.”

The embarrassment was thorough, from the ill-fated decision to stomp on the Chiefs' logo at midfield during pregame warmups to the five turnovers on offense to a defense that failed to stop Kansas City once following the opening drive.

“I didn’t expect this," quarterback Derek Carr said. “I can’t speak for everybody, but from my point of view, I didn’t expect it to be like this. That falls on us as players and as coaches. Whenever that outcome happens, you’ve got to turn the tape on and see what happened. It’s pretty obvious what happened from an outside perspective. But why? We’re in the business of solving problems and not pointing fingers.”

Passes to Hunter Renfrow. About the only thing the Raiders did well Sunday was get the ball in receiver Renfrow's hands. He had 13 catches for 117 yards and a TD, becoming the first Raiders player with three straight games with at least eight catches and 100 yards. But even Renfrow was part of the miscues, losing a fumble on one of his catches.

Ball security. The Raiders turned over the ball five times on 10 drives in the game. Jacobs lost the early fumble, Renfrow and Zay Jones lost fumbles on catches, and Carr lost another on a sack. Carr also threw an interception on a pass that Foster Moreau bobbled into Tyrann Mathieu's hands. The last time an NFL team lost four fumbles in a game came last season when the Raiders did it against Atlanta.

Malcolm Koonce. The third-round draft pick didn't see his first action of the season until Week 13 but has delivered sacks in back-to-back games for the Raiders. Koonce is the 12th Raiders rookie with sacks in consecutive games since sacks became an official stat in 1982.

Coaching staff. The Raiders got off to a promising start under interim coach Rich Bisaccia with wins in the first two games after Jon Gruden's resignation. Since then the team has lost five of six, with Bisaccia making questionable in-game decisions, coordinator Greg Olson's offensive looking unimaginative, and Gus Bradley's defense getting picked apart. More performances like this could lead owner Mark Davis to make a complete overhaul in the offseason.

The Raiders visit Cleveland on Saturday.