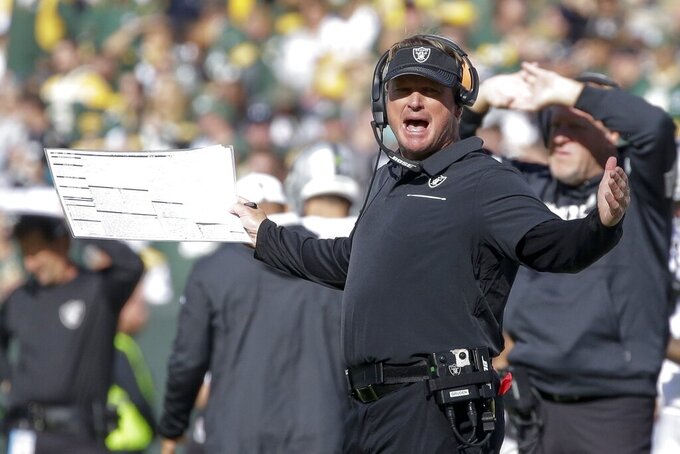 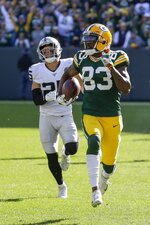 ALAMEDA, Calif. (AP) — While Derek Carr's costly fumble reaching for the goal line at the end of the first half may have been the momentum changer, there wasn't much the Oakland Raiders offense could have done against Green Bay the way Aaron Rodgers carved up the defense.

Rodgers had a flawless performance against an overmatched Raiders defense, throwing for 429 yards and five touchdowns while posting a perfect passer rating of 158.3 in the Packers' 42-24 victory Sunday.

"I think when you give up 430 yards passing and five touchdowns, it's everybody included," coach Jon Gruden said Monday. "It starts with me. It starts with everything we do. From a preparation standpoint, to a down-to-down execution. Communication, our whole process really, has to improve against these great quarterbacks. They're not forgiving people. These guys see a mistake, they make you pay. Rodgers, I credit him. He did a great job."

The Raiders tried to match Rodgers early in the game and were in position to take a lead late in the first half before Carr's fumble at the goal line. Rodgers then threw a touchdown pass to end the second quarter and ran for one on the opening drive of the third quarter to turn a 14-10 game into a 28-10 laugher.

Rookie running back Josh Jacobs is looking like a star. He ran for 124 yards to become the first Raiders rookie with back-to-back 100-yard games ever. Jacobs leads all rookies with 554 yards rushing and four TDs on the ground. He has the most yards rushing in franchise history through his first six career games.

Pass defense. A defense that showed signs of improvements in wins against Indianapolis and Chicago was exposed against Rodgers. This was just the third time a QB has thrown for at least 400 yards and five TDs against the Raiders. Cornerbacks Gareon Conley and Daryl Worley both struggled, even though the Packers were missing top wideout Davante Adams. Conley was traded to Houston on Monday for a 2020 third-round pick and rookie Trayvon Mullen could get a shot this week.

TE Darren Waller. In his first game since signing a contract extension, Waller had his most productive game yet. Waller had seven catches for 126 yards and his first two touchdowns of the season. Waller's 44 catches so far are the most in franchise history through the first six games of the season. Oakland also got good contributions from the backup tight ends with Foster Moreau catching two passes for 24 yards and a TD and Derek Carrier catching two passes for 22 yards.

"I believe that's the lifeblood of our offense," Gruden said. "Waller is not a tight end, he's a football player. You can line him up anywhere. He lined up in multiple places. So did Moreau and Carrier. They love playing physical football. They can line up and play the finesse game. They're really smart and supportive of one another. They have no egos, they're great guys. I couldn't be happier with the tight ends."

Carr's decision making. Carr had one of the most efficient games of his career, going 22 for 28 for 293 yards and two TDs and posting the second-highest yards per attempt in his career. But that was overshadowed by a pair of red zone turnovers. The most costly came late in the first half when Carr reached out for the goal line on a scramble only to lose the ball through the end zone for a touchback. Making matters even worse is Carr made the same mistake in a game against Dallas two years ago. Carr also threw an interception in the end zone in the fourth quarter.

The Raiders are hopeful of getting three key players back this week with right tackle Trent Brown (calf), receiver Tyrell Williams (foot) and defensive end Arden Key (knee) all questionable.

75. The Raiders allowed six TD drives of at least 75 yards. They were just the third team to do that since 2000, joining the Giants in 2015 against New Orleans and Dallas in 2013 against the Saints.

The Raiders finish their stretch of five straight games away from Oakland when they visit Houston on Sunday.