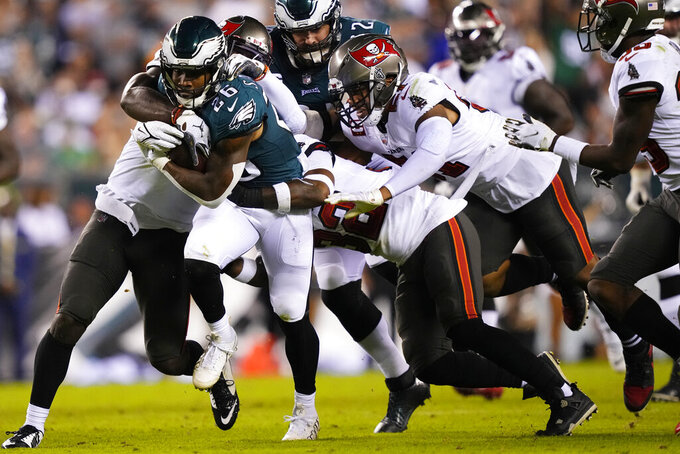 Philadelphia Eagles running back Miles Sanders (26) is tackled during the second half of an NFL football game against the Tampa Bay Buccaneers on Thursday, Oct. 14, 2021, in Philadelphia. (AP Photo/Matt Slocum)

OPENING LINE: Raiders by 3, according to FanDuel SportsBook.

TURNOVER DIFFERENTIAL: Eagles plus-1; Raiders plus-3.

EAGLES PLAYER TO WATCH: RB Miles Sanders has been underused in Philadelphia’s offense but he ran for 50 of his 56 yards against the Buccaneers in the fourth quarter of recent loss after getting just one carry in the first half.

RAIDERS PLAYER TO WATCH: DE Maxx Crosby. Crosby was involved in all five Las Vegas sacks last week, getting one solo sack and splitting four others. Crosby’s five sacks on the season are the most for a Raiders player through six games since Richard Seymour had five in 2011.

KEY MATCHUP: Eagles DT Javon Hargrave vs. Raiders interior OL. Hargrave leads all DTs in the NFL with six sacks and joined Jerome Brown (1989) as the only Eagles DTs ever to have that many through six games. The Raiders have struggled in the interior of the line with guards John Simpson and Alex Leatherwood and center Andre James.

KEY INJURIES: Eagles RT Lane Johnson is expected to return after missing three games because of a personal matter that he said was related to anxiety and depression. ... TE Dallas Goedert remained on the COVID-19 list Wednesday after missing last week’s game. ... The Raiders placed S Roderic Teamer on IR this week with a shoulder injury. ... Las Vegas DT Johnathan Hankins could return after missing one game with a hip injury.

STATS AND STUFF: Eagles QB Jalen Hurts had two TD runs and a TD pass last week. He is the sixth QB since the merger with at least two TD runs in consecutive games. ... Hurts' 2,831 yards running and passing are sixth most of any QB through 10 starts. ... Philadelphia has been penalized a league-high 54 times this season. ... Eagles rookie WR DeVonta Smith has 27 catches for 345 yards and a TD through six games and has seven catches in two of the past three contests. ... Las Vegas is tied for the league-low with four turnovers. Philadelphia is third fewest with five. ... The Raiders won in interim coach Rich Bisaccia's debut last week. Bisaccia will try to become the sixth Raiders coach to start 2-0 and first since Bill Callahan in 2002. ... Las Vegas had seven pass plays of at least 25 yards last week, the most in a game since at least 1991. ... The Raiders averaged 8.19 yards per play last week for their best performance since 1997. ... Las Vegas RB Kenyan Drake had a TD catch and TD run last week, becoming the first Raiders player to do that in the same game since Darren McFadden against the Bills in 2011. ... The Raiders are last in the NFL with 3.33 yards per carry.

FANTASY TIP: Carr has been putting up big numbers so far this season. He has thrown at least two TD passes in five of six games and ranks second in the NFL with 1,946 yards passing.